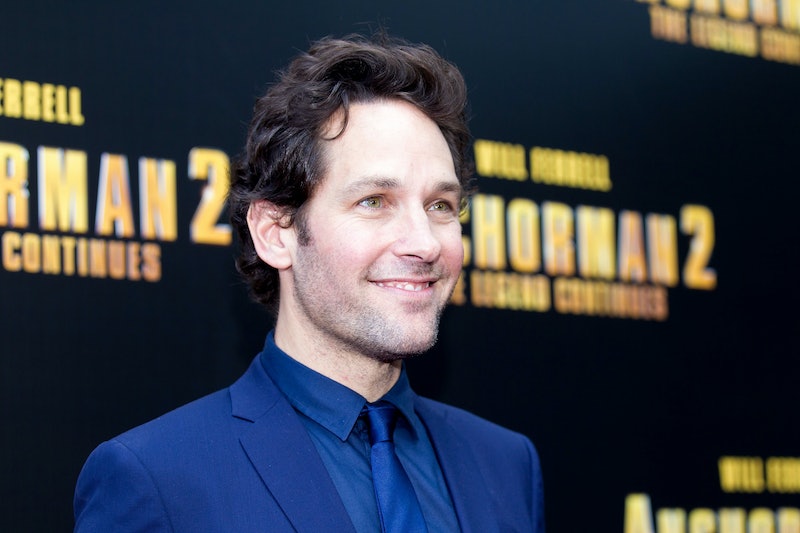 We've been crossing our fingers and praying to the Marvel gods, and now it sounds like it's close to being official: Paul Rudd might play Ant-Man in, well, Ant-Man. (UPDATE: It's official, Paul Rudd is Ant-Man!) It's Marvel, AKA the current reigning monarch of the comic book movie, and it's Paul Rudd, AKA the eternal prince of charming smiles. In other words: The world is rightly very excited.

In honor of this news, we figured it's time to get a little more acquainted with Ant-Man the movie and Ant-Man the man.

Here are some things to know about Hank Pym:

Another possibility of who Rudd might play is Scott Lang, a criminal who also takes on the identity of Ant-Man upon stealing the size-changing technology to save his ailing daughter.

There have been three Ant-Men so far: Hank Pym, Scott Lang, and Eric O'Grady. Paul Rudd is most likely playing Pym, who was the first Ant-Man and who created the technology. It has, however, been hinted by Marvel bigshot Kevin Feige that there will likely be elements of the O'Grady Ant-Man in the film, which makes sense because O'Grady was a low-level agent in SHIELD when he stumbled upon the Ant-Man suit and decided to go ham.

In other words: If they decide to do a little mixing and matching, it's entirely possible that a Pym Ant-Man will also work for SHIELD.

The Film Is Directed By Edgar Wright

You may know Edgar Wright from the beloved Cornetto Trilogy (that's Shaun Of The Dead, Hot Fuzz, and The World's End), or from 2010's Scott Pilgrim Vs. The World. He's known as a very dynamic, witty director, and is generally very beloved in the demographic that tends to spend all their money seeing comic book movies.

In other words, Wright was likely a damn good choice.

It was rumored months ago that Jones will be playing Van Dyne in Ant-Man, and once again we pray every day that it comes to pass. So who is Janet Van Dyne?

Janet Van Dyne is The Wasp. Only she's not The Wasp in the beginning of the Ant-Man story; she's the daughter of an associate of Pym's (Dr. Veronon Van Dyne). When her father is murdered (that's not a spoiler it's a basic tagline origin story), Pym reveals his secret identity to her and she convinces him to imbue her with similar shrinking powers. She gets wings and "fire blasts" she calls her wasp stings, hence her alter-ego name.

There's a Possible Tie-In To The Avengers

Actually, Van Dyne is the one who gave the Avengers their name — she and Pym were two founding members. At one point Van Dyne is even elected the leader of the team.

Both Ant-Man and The Avengers: Age Of Ultron are scheduled to come out in 2015, with Ant-Man beginning filming in mid-2014. Obviously in our Marvel movie universe right now the Avengers have already been founded, but that doesn't mean there's not still plenty of opportunity for crossover.