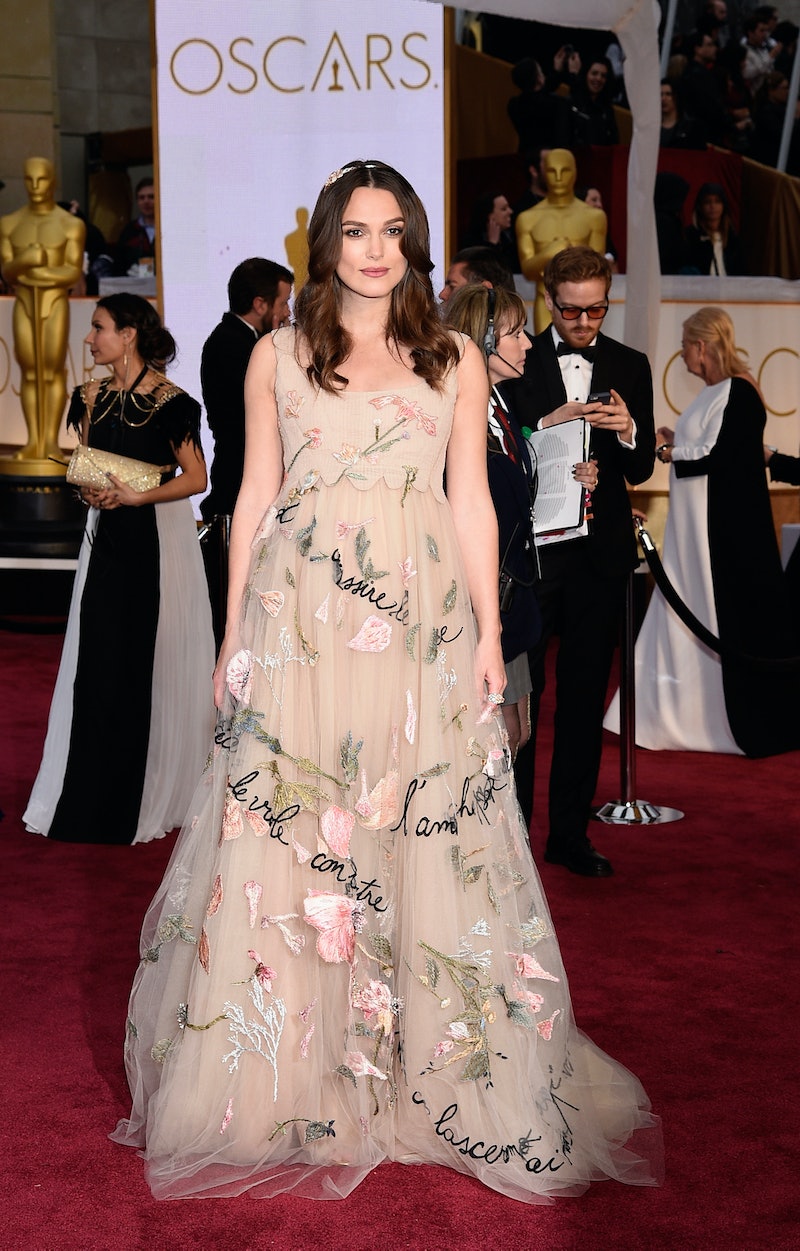 In the new action-adventure film Everest, Keira Knightley plays the pregnant wife of real-life climber and mountain guide Rob Hall. Jan Arnold, an Australian doctor, is tied to the events of the film through phone calls with her husband. She was obviously in no condition to join the expedition; the couple's daughter was born just nine weeks after the events of the film. Maybe Arnold feels a kinship with Knightley then, since the actress's first pregnancy was confirmed by her publicist not long after Everest filming wrapped. Baby Edie was born in late May of this year, and Knightley told Elle that she feels a "very primal, primal love" for her child. But was Keira Knightley pregnant during Everest ?

Not even the hint of a real baby bump appears on the actress's person in Everest. Count nine months back from Edie's birthdate, and that puts conception time in August of 2014. According to Deadline, the studio filming crew of Everest were nearly wrapped in April of that year, when a deadly avalanche threatened the crew on location in Nepal. (Promotional materials created for the film — including the first trailer — solicit donations for Nepalese disaster relief.) Knightley's scenes were surely among those filmed in the studio in London; her work on the film was completed that spring.

Moms-to-be have a history of rocking action flicks. Here are a few other actresses who brought their bumps along with them to kick some tail.

I would recommend that expectant women without teams of studio medical professionals on call do not follow in the footsteps of Black Widow, at least in one respect. "I don't think you're allowed to ride a motorcycle when you're so pregnant, but I did," Johnansson said at an Avengers press conference, according to People. That kid is destined to be a badass.

Roberts was carrying her twins while she filmed the heist sequel in Italy. As a solution to the bump issue, the film went full-meta. Part of the 12's strategy is for Tess to go undercover as a pregnant — you guessed it — Julia Roberts. That's one way to do it.

Pregnant with her second child, the Oscar winner told Dark Horizons that she coped with the demands on her body by doing "lot of sleeping" on the set of the David Fincher thriller, sometimes snoozing straight through meal breaks. (My nightmare.)

4. Penelope Cruz In Pirates Of The Caribbean: On Stranger Tides

"I was pregnant and a pirate," Cruz told Vogue about swashbuckling while with child. "It was a beautiful experience." That is the dream.

5. Halle Berry In X-Men: Days Of Future Past

In this instance, the star's pregnancy did impact the final product. Berry's condition came as a surprise, so the role of Storm had to be adjusted to keep mom and baby safe. "She'll be different than we originally planned her to be," the actress told the BBC before filming began. But the future was still saved, even under the mutant's restrictions.

The new April O'Neill's pregnancy was unexpected too, and news came two weeks into the filming of the TMNT reboot. Fox told Ryan Seacrest that her inclination was to "lay under the covers and watch Bravo TV and the Housewives " instead of working, but I don't think those desires are exclusive to pregnant ladies.

Stunt work and physical activity have got to be hard enough as it is. I've got to give it up to these women for the work they put in while pregnant.