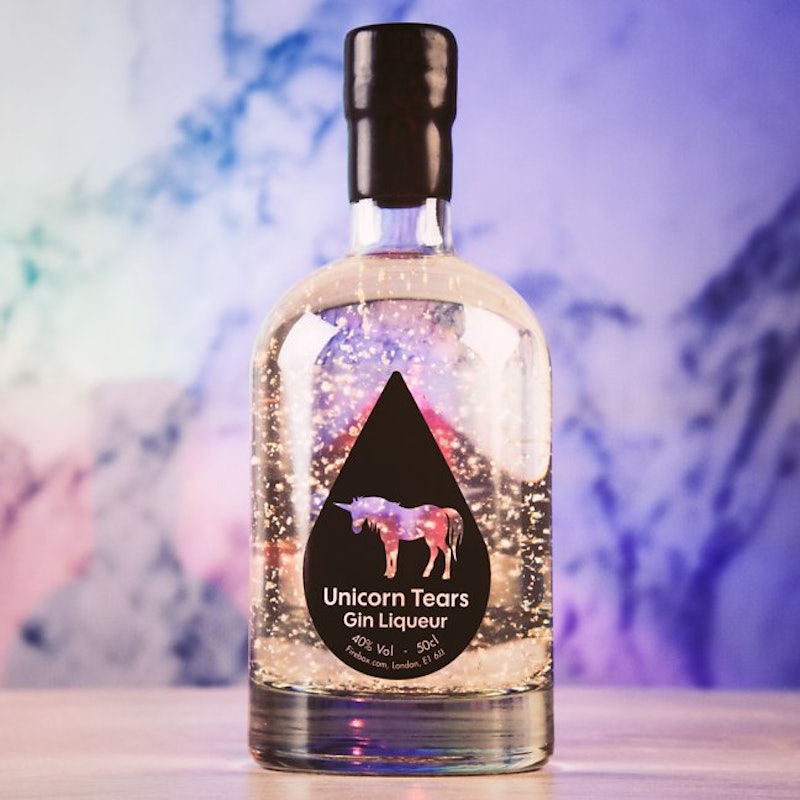 Hi, yes, can I speak to the Minister of Magic? Because now that this "Unicorn Tears" gin exists, I'm low key concerned that 2015 is the year Voldemort decided he was not so dead after all. For all the '90s babies who were also scarred for life by the scene where He-Who-Must-Not-Be-Named drank unicorn blood, now you have a chance to scar the next generation all by yourself for the low, low price of $61! It may seem steep, but when you think about it, is a pretty cheap price to pay for the tears of the universe's most majestic mythical beast and a true ~circle of life~ moment.

In case you were wondering what the tears of a unicorn taste like, the makers at Firebox claim that it is fantastical flavor mix of candied orange peels, juniper leaves, lemongrass, mint, and maple syrup. That's not accounting for the aftertaste of your villainy, which I'm guessing no amount of chaser will ever quite take the edge off. Ah, well. At least that's a little more subtle than walking around with a Dark Mark on your arm, amirite?

The gin is on preorder right now and expected to ship on October 8, giving you just enough time to whip up the creepiest Halloween cocktails ever.

According to the makers of this villainous brew, it was no small feat to get it made:

Bringing you this enchantingly scrumptious Gin Liqueur has been no easy feat. We’ve lost mammoth minutes of beauty sleep over the past few months - because we’ve been up all night slaying unicorns for your drinking pleasure — believe us when we tell you those frisky little buggers aren’t easy to snag. A harrowing quest, some courageous Fireboxers were lost along the way, but it was all well worth it because blimey is this stuff fantastic.

And in case you missed it, those are actual, REAL flakes of silver that are shimmering within its depths. I'm guessing that's a necessary precaution to take to preserve the benefits immortality and complete and total dominion over all things on earth.

So hey, if you want to live out your Voldemort bliss but you don't want to do all the pesky dirty work, go buy some Unicorn Tears. And if you really want to take your villain status to the next level, you can invest in some other themed drinks for people who are ~bad to the bone~:

Channel your inner drug lord at the next neighborhood block party!

This is Kelsea, the most adorable villain that ever was, and also our entertainment editor. She is a baller for keeping these on her desk and we all need to get on her level. WINTER IS COMING.

For when you're not feeling particularly subtle.

So there you have it, guys: your one stop shop for getting drunk and becoming a storybook villain at the same time. Tell your loved ones I said you're welcome!!