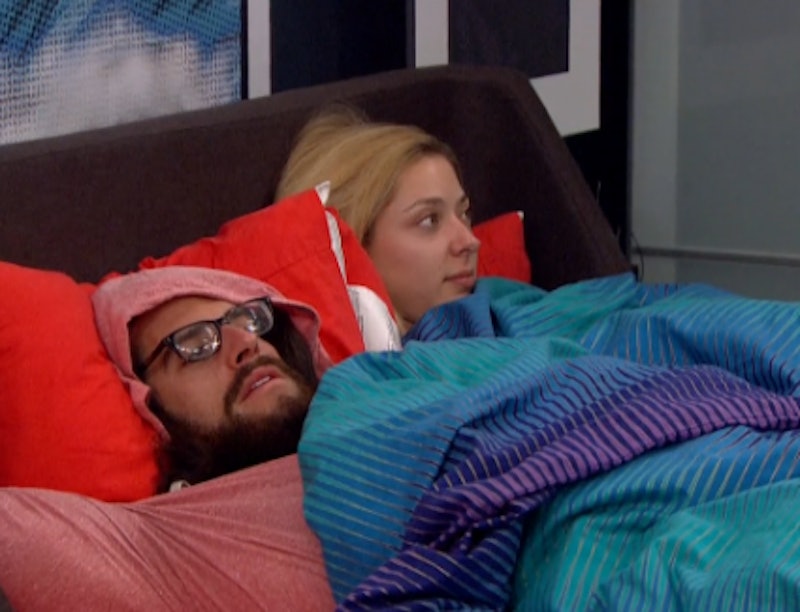 Poor Liz Nolan. This has been a rough couple of weeks for her on Big Brother. First Liz and her identical twin Julia were on the block for eviction. Then her sister and closest ally left the house, and it was a completely devastating cry fest. Even though the girls saw it coming and actually got to choose which twin left the Big Brother house, Liz was defeated and looking for revenge, only for Liz's boyfriend Austin to get booted from the house the next week. So, how is Liz reacting to Austin's Big Brother 17 eviction? Pretty well it seems. The live feeds were down for most of the day so the fans did not get to see Liz's behavior immediately after Austin left the house, but soon she seemed pretty much OK. It's a stark contrast from Julia's eviction in many ways.

I have a feeling that if Liz left before Austin he would be utterly devastated for days upon days, but that is just so not the case there. It's unclear if Liz shed some tears when the feeds were down, but she wasn't crying at all when they were up after Austin's eviction aired. Vanessa was crying more than Liz was and she was the one whose vote sent Austin out of the house.

I get that Liz basically just met Austin and it's not completely justified to compare her reaction to his departure to her sadness when Julia left, but Austin is her boyfriend. I thought that maybe she would be more upset about it. The difference between those two situations is pretty interesting.

Even though Liz knew Julia was going home, she had so much to say and was very upset about it. Liz was crying for days and vowed to get revenge on her sister's behalf. Liz even wanted to go after Steve in honor of Julia.

It's true that Liz had no idea Austin was going to leave the house and when Vanessa cast her vote, so she had a look of shock on her face, but that was pretty much it. She hugged Austin goodbye, but she didn't seem extremely torn up about it. Granted, she was probably in shock, and it still hadn't hit her yet, but I figured that a day later she would be crying about how she feels alone in the game. That doesn't seem to be the case.

With the news of Julia's eviction, Liz was very despondent and spent a lot of time in her bed. She even kept her sister's drinking cup to commemorate their experience together. When Austin left, Liz ended up hanging out with Steve — her sworn enemy from the week before. She clung to Steve for entertainment and fun times that included play wrestling and laughing.

Honestly, the remaining twin is going to be just fine without Austin in the house. Yes, Austin said over and over again how he was trying to protect the twins during this game, but Liz didn't necessarily need him. She has won a lot of competitions on her own and she can do well without him. Liz was Julia's protector in this game so it makes sense for her to feel both sad and defeated when her sister left. Plus, in all honesty Liz has only known Austin since June and they have been "dating" for an even shorter time span than that so I don't see why she would be hysterically crying if he left. Liz is no damsel in distress, and she's going to be just fine without Austin in the house.