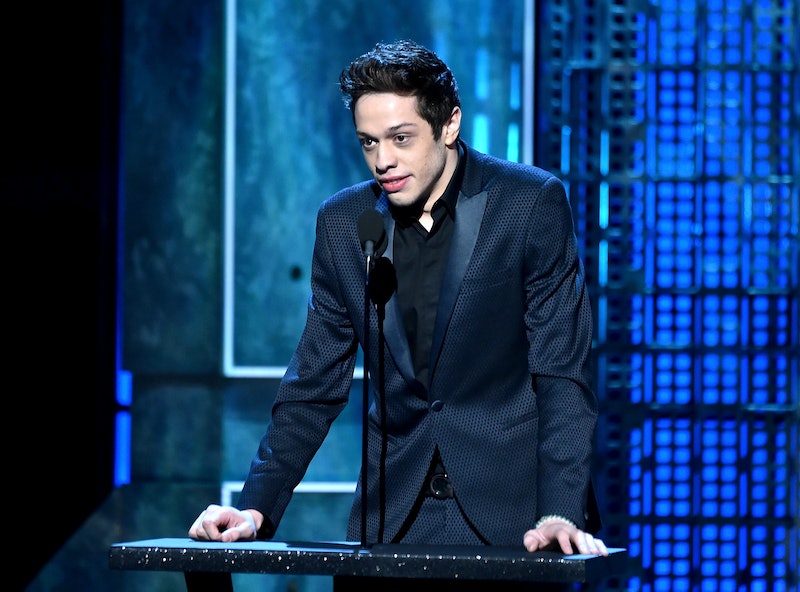 Ugh, you guys, I'm feeling so much secondhand shame that I can't decide whether to crawl under a rock or wash out my brain with bleach. The saga of Steve Rannazzisi lying about escaping 9/11 keeps getting worse and worse, as if that was even possible. After being challenged on his claims that he'd been in the south tower on Sep. 11, 2001, working in Merrill Lynch's offices on the 54th floor, Rannazzisi admitted on Wednesday that he had fabricated the entire story, including feeling the collision of the first plane with the north tower, and watching from the street below as the second plane hit his building moments after he escaped. That alone would be bad enough, but, later that same day, Rannazzisi responded to Pete Davidson's tweet without noticing Davidson's sarcasm in time to save himself from this utterly tone-deaf moment.

Rannazzisi's confession was enough to turn my stomach on Wednesday, but I was at least relieved that the comedian, probably best known, until now, for his work on The League, had finally decided to be honest. But that silver lining of relief was blown out by Rannazzisi's response to Saturday Night Live featured actor Pete Davidson's joking tweet. At first glance, the tweet appears to forgive Rannazzisi for lying for a decade about his proximity to the tragedy, and Rannazzisi responded accordingly, thanking the fellow actor and comedian for his empathy.

Except no. Because Pete Davidson's father Scott Davidson is not alive today, on account of being a firefighter who died — you guessed it — in service on Sept. 11, 2001. So, instead of this being a tweet brushing off Rannazzisi's 14 years of lies, it's the exact opposite: a tweet pointing out just how insidious these lies are, and how insulting and disrespectful they are in light of the fact that this event genuinely claimed lives (is still claiming them!) and destroyed families. This lie is offensive to people who would do anything to turn back time and have been somewhere else that day, or for their loved ones to have been somewhere else that day, and now have to deal with this news about Rannazzisi, who pretended for over a decade that he'd been a part of it.

That Rannazzisi was so eager to erase his lies and feel good again that he grasped onto the first sign of forgiveness without realizing that it was actually a joke at his expense is part of the same pattern, and it makes this even worse. It makes it seem as if he thinks it's that easy to walk away from this lie, when the privilege of just returning to their lives as normal was a privilege denied so many on that day.

Rannazzisi has since deleted the tweet at Davidson's own urging, but, if anything, this insensitive gaffe just throws into sharper relief just how much Rannazzisi has to learn about the pain he has caused. Meanwhile, Pete Davidson would like everyone to go easy on Rannazzisi because he, Davidson, does get it, and he knows that, no matter how offensive Rannazzisi's choices might seem, spewing hate is exactly what got us into this position in the first place.

So props to Davidson for being a mature individual, and grudging optimism for Rannazzisi, that he'll really genuinely do his best to atone for this enormous, stomach-churning mistake.