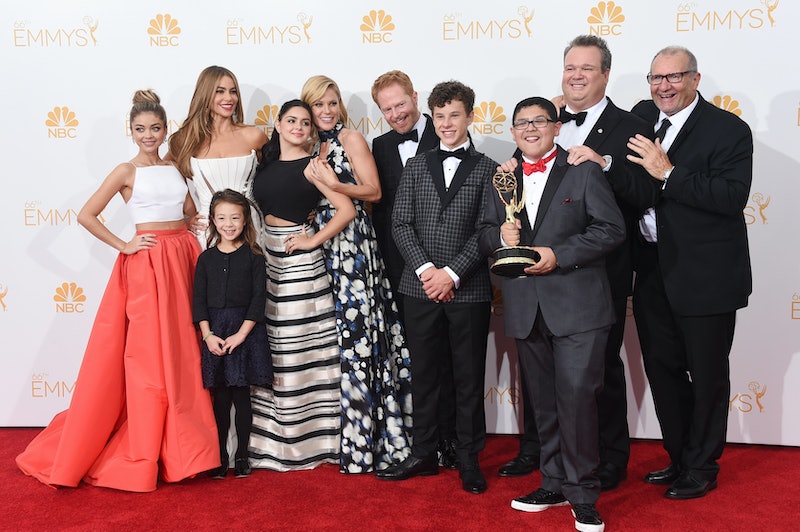 Modern Family is an awards darling and the show is poised to pick up even more trophies at the 2015 Emmys. Modern Family already has a ton of Emmy awards, but they're following in the footsteps of two other major shows: Friends and Sex and the City. While it's easy to sigh every time another Modern Family cast-member collects an Emmy, you shouldn't hate on them because they're following in a time-honored — and not easily achieved — tradition.

The Modern Family cast has 22 Emmy wins, with a total of 73 nominations. (This doesn't take into account their potential 2015 wins.) It's no surprise that they're a huge presence at the Emmys every year. If you look closely, however, you'll notice that all of the Modern Family stars submit themselves under the Supporting categories, with no one submitted as a Lead. Back in 2010, insiders reportedly told Deadline that Ed O'Neill made "the surprising move because he felt that nobody is bigger than anybody else in a show that is evolving into a true ensemble hit."

This is a move very reminiscent of the Friends cast. The hit NBC show earned a total of 62 Emmy nominations and ultimately collected six awards. However, the method the cast chose of submitting themselves set a precedent. In 2002, PEOPLE reported on Friends' decision to have all six stars submit themselves under the Supporting categories for the first seven seasons of the show. "Up until this point, they've submitted themselves in the supporting roles; the reason being they're all equal," executive producer Keven Bright reportedly told Variety (quote via PEOPLE). "There's no real star of the show."

Of course, the Modern Family's consistent nominations is reminiscent of both Friends and Sex and the City, which had seven wins and 54 total nominations. When I look back at the Emmy Awards of the mid-'90s and early-'00s, it seemed like those casts were always out in full force — and for good reason. Both were groundbreaking shows that still resonate today. They were well-written with stellar casts, so their accolades were well-deserved.

While Sarah Jessica Parker rightfully submitted for the Lead Actress category, the other three stars often went head-to-head for the Supporting Actress Emmy. In 2002, 2003, and 2004, at least two of the actresses were nominated in the same category, much like we saw with Friends and Modern Family.

What these shows do is set a standard for other ensemble casts by highlighting the collaborative work instead of one breakout star. When all of the stars agree take to on the "all equal" stance, it allows voters to truly look at the show as an incredible whole, rather than a division of almost-equal parts.