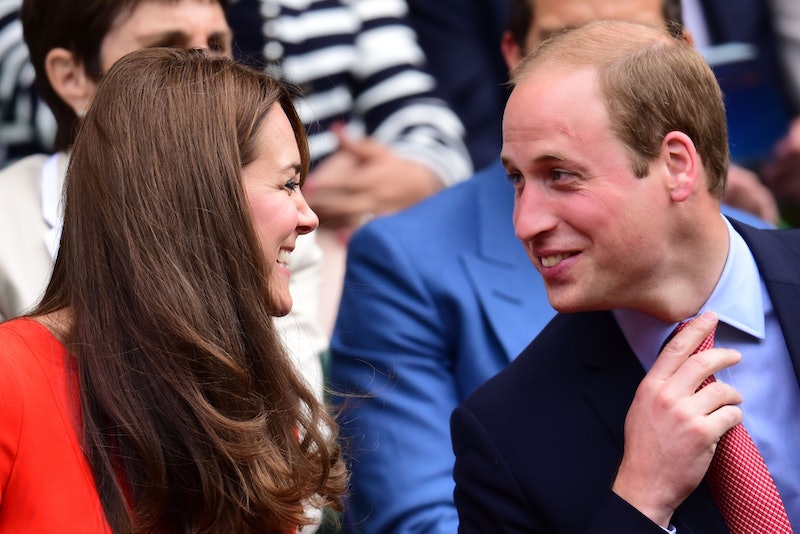 I always just assumed that Kate Middleton and Prince William met in an ordinary, but romantically sweet fashion. They both attended St. Andrews University, so naturally, they locked eyes for the first time while sitting across the room from one another in an undergraduate lecture hall at the School of Classics. After class, he asked to borrow her notes. That led to a study session, which led to a date — and then marriage, two kids, and the keys to the throne. But no. I've clearly been watching too many movies because that isn't at all the way they connected. The truth, according to royal biographer Katie Nicholl, who wrote Kate: The Future Queen, is that Middleton's thoroughly uncommon commoner background pretty much sealed the deal that she was destined to marry someone like William — and, clutch your pearls, she may have even conspired to hook up with him.

It seems my St. Andrews theory was a commonly held one that was only rocked when Nicholl reportedly told Katie Couric in 2013 that she discovered Middleton had met William before the two enrolled in college in 2001. Here's what she had to say:

This was really fascinating for me. I was speaking to some of her friends at Marlborough School, which was where she went before St. Andrews, and they said, "Uh uh, she didn't meet him at St. Andrews. She met him before she got there... through some of her friends. They knew Prince William and Prince Harry." So there was an early meeting, and that for me changed everything.

Nicholl went on to tell Couric that Middleton had plans to attend Edinburgh, and was accepted to the highly-regarded university. But, for some reason, she suddenly changed her mind, took a gap year, and then applied and was accepted into St. Andrews. She wasn't alone in her decision — Nicholls says the Scottish university was inundated with applications (which shot up by 50 percent) the year it was announced the William would be attending.

The real question now is: Did Middleton attend St. Andrews so she could get close to her future husband? To be fair, the university is the oldest in Scotland and one of Great Britain's most prestigious, so it's not like she was settling, but it sure is interesting to think that she may have had a hand in planning her royal future.

Whether she was more calculated in her moves than some think or not, the fact remains that Middleton reportedly caught the prince's eye at school, where she was dubbed the "prettiest" girl at "Sally's," one of the university's 11 residence halls, where both Middleton and William lived during their freshman year, according to Vanity Fair. Reportedly, he would often see her running outside and he finally got up the nerve to ask her to join him and friends at their table in the dining hall.

From there, they are said to have became fast friends who shared a lot in common, including a love of travel, art, and sports. But they didn't hook up right away. William reportedly dated a "country bumpkin" named Carley Massy-Birch —who apparently won the award of "finest first year bottom" for her derriere (um, lucky girl?) — and quickly jumped into another relationship with a girl named Arabella Musgrave. And it's not like Middleton was sitting in her dorm room waiting for William to call. She reportedly hung out with a mighty cute older law student named Rupert Finch, whom she dated for less than a year after she arrived at St. Andrews.

Things got a lot hotter between Middleton and William during their second semester, though, and apparently, they both have black underwear to thank for that. According to Nicholl, Middleton appeared in a charity fashion show called Don't Walk, where she paraded down the runway wearing a sheer dress and black panties — seriously, can you imagine the lengths the royal couple probably went through to keep evidence of that from Queen Elizabeth? William, who was sitting in the front row at the show, is said to have lost his mind and the rest is history. He reportedly cornered Middleton at an after-party and kissed her, even though she was still dating Finch. Pretty soon, they made their relationship official.

While fate certainly played a role here, it wouldn't be wrong to assume Middleton's privileged background — how many people run with the same crowd as William and Harry? — as well as her last-minute decision to change colleges and a bit of lingerie had a lot to do with them getting together. Their sweet story is just making me wish even harder that news about Middleton and William's marriage problems are little more than rumors — you got this, guys!

More like this
Kate Middleton Makes Rare Comment About Talking Therapy
By Sam Ramsden
Keke Palmer Shares The Sex Of Her & Darius Jackson's Baby
By Jake Viswanath
Hilary Duff's Husband Matthew Koma Has Her Name Tattooed On His Butt
By Jake Viswanath and Stephanie Downs
Who Is Allison Williams Dating After Her Divorce? She’s Engaged With A Child
By Jake Viswanath
Get Even More From Bustle — Sign Up For The Newsletter
From hair trends to relationship advice, our daily newsletter has everything you need to sound like a person who’s on TikTok, even if you aren’t.