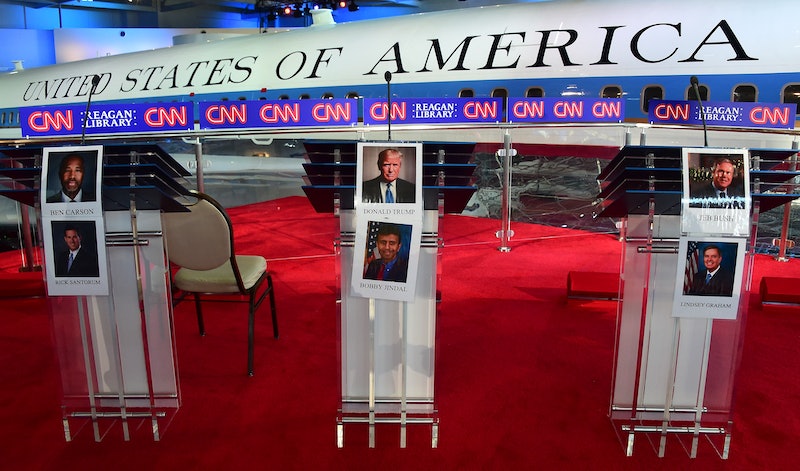 No, it's not a bird, but yes, it's a plane. In the same WTF fashion that keeps shaping and reshaping the Republican bid for the 2016 seat in the Oval Office, there's going to be a plane on stage for the September 16 debate, which airs on CNN. Yep. I wasn't kidding. The plane is a fixture in the Ronald Reagan Library, where the debate is taking place. It's the real-life Air Force One used to fly Reagan all over the world during his presidency. According to the museum's website, the plane has flown to 26 foreign countries and 46 U.S. states and logged more than 660,000 miles high in the sky. So yep, it's real — and it didn't just serve Reagan. It was used by six other U.S. presidents: Nixon, Carter, Ford, George H.W. Bush, Bill Clinton, and George W. Bush. It's on loan to the museum from the United States Air Force, though The LA Times reports that the plane was officially retired and donated to the museum as of 2001.

The plane is a huge investment put forth by CNN to mark the parallels between Reagan and the current field of GOP presidential hopefuls. And this gets so much better: The candidates are basically eye-level with the plane. Because what's the point of having a plane on stage if it doesn't look like the candidates are standing directly in front of it, waiting to board it and ride off into the sunset, metaphorically ready and ripe to take over as the new leader of the free world? And people think the GOP can't plan ahead.

There's talk every election cycle amongst Republicans over who'll take on the torch that Reagan once carried — one they believe he touted high and mighty over America. CNN reports that it's "a rite of passage for Republican White House aspirants to invoke Reagan" because during his tenure in office (from 1981 to 1989) Reagan revitalized the American people, reducing big government's role in their everyday lives. And after only 69 days into office, Reagan was shot by a would-be assassin, which was basically the icing on top of his super-creamy, super-popular cake. For so many who loved him, his survival was a Cinderella story in the making, and it caused his popularity to skyrocket.

During his first term, Reagan cut taxes, gave the economy the oomph it needed to surge forward, curbed inflation, created jobs, and buffed up America's national defense. It was enough to win him a second term. Though he increased defense spending, Reagan also improved the American relationship with the Soviet Union, "achieving peace through strength". He also did tons of shitty stuff too; like using money from Social Security, the scandalous Iran-Contra Deal, and an outright refusal to acknowledge AIDS until roughly his second term in the White House. Republicans have felt that the GOP's pool since Reagan has failed to live up to his beloved image.

Which brings us back to the CNN debate. And the plane. The plane on the stage. The one they keep panning out to show viewers at home in between commercial breaks and before questioning. The plane is real, and it's there to remind us that these people are vying for the chance to carry on the Reagan's metaphorical torch.

In a way, it's kind of cute to think that they're all vying for daddy's attention — except daddy was the president, is dead, and well, is not their daddy. And it's a clear ratings ploy to get more people to tune into CNN's debate than for the FOX debate that took place weeks ago. So yeah, kind of cute, I guess.