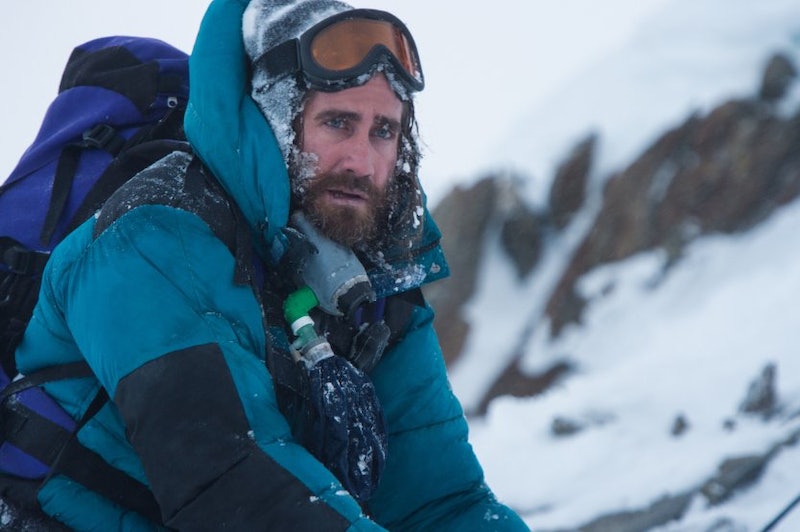 Everest is an ambitious title for a film. It lays claim to the highest peak and the popular conceptions and lived experiences that surround it — but with good reason. It recounts the moment when "the commercialization of Everest" began, director Baltasar Kormakur told Variety, through the lens of a 1996 expedition that killed eight climbers during a particularly brutal season. It's based on the John Krakauer book Into Thin Air, which tells the story of that fateful and fatal year. Krakauer accompanied the climbers on part of their expedition, and now Jake Gyllenhaal and Jason Clarke will bring the story to life. But how did they do it — was Everest really filmed on Mount Everest?

Filming actually occurred in several locations across frosty Europe, as well as the Everest base camp. Because of challenges of climate, weather, and the grueling lack of oxygen at the heights of Everest, the filmmakers selected less daunting peaks to stand in for the highest mountain. That's not to say that the more accessible mountains were that much easier — temperatures in the Dolomites, one of the filming locations, reached 20 degrees below zero Celsius. The filmmakers and actors took on very real risks in making this film, in Nepal and beyond. Here's where they went:

Tribhuvan International Airport in Kathmandu, Nepal acted as a film studio for Everest. Its domestic terminal was the location of shooting for scenes in which the expedition team arrived in Nepal to prepare for their climb. Airport aside, the shooting locations also included several streets and neighborhoods in Kathmandu and the city's iconic Buddhist place of meditation (known as a "stupa"), Boudha.

The film's leads Jake Gyllenhaal and Jason Clarke, who play two of the expedition leaders (though only one will make it out of the expedition), trained for the shoot by hiking in the Santa Monica Mountains. They scaled a cliff and got lost in the process, wandering till the sun started to set and they came across a few hikers who helped them to safety. (Temperatures drop dangerously at night, and wildlife comes out for the hunt.)

The filmmakers received permission to film in Nepal for a short amount of time, some of which was spent at the Everest base camp that serves as the launch pad for all climbers hoping to scale its summit. Filming at Everest lasted under a month before the team moved to the Dolomite Mountains in Italy, but it was a fraught exercise. During the filming, an avalanche took down a number of sherpas delivering supplies to climbers preparing to get to the summit. Luckily, no one on the film crew was injured, as Deadline reported at the time, but it proves the fragile conditions under which Everest was made.

The Italian mountain range served as a more accessible location for logistical and climate reasons during the filming of Everest. The actors underwent climbing and mountaineering training to prepare for their roles, which were as much physical tasks as they were artful ones. It allowed them to perform at their peak while also scaling the Italian Alps. The Italian leg of the shoot reportedly lasted six weeks, according to Variety.

Director Kormakur hails from Iceland, so it seems rational that he'd pick his homeland to film some of Everest. Variety reported that the film moved to Iceland for a month of its shooting schedule.

Perhaps least excitingly, Everest also filmed at the Cinecittà studio in Rome, Italy. But it means the cast and crew had time to wander among the incredible history of the city and maybe soak in a little warmth before heading back to the frigid temperatures of various mountain ranges.

Everest it may be called, but the Everest of Kormakur's film is an amalgam of more than one mountain range. On screen, it takes Italy, Nepal, Iceland, and the United States to equal the world's highest peak.

Editor's Note: This article originally stated that Josh Brolin, not Jason Clarke, played one of the main expedition leaders in the film.