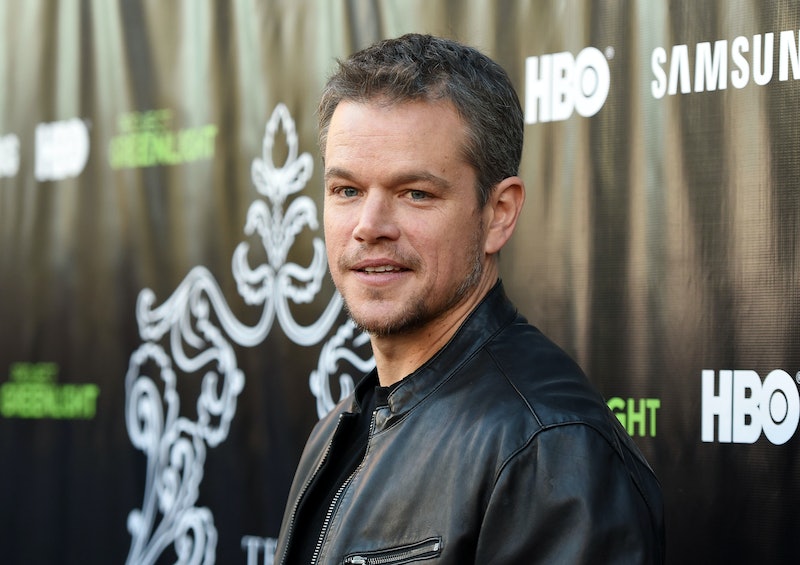 If you're interested in watching a film made by a white, male director then look no further than nearly every single one of the films that Hollywood churns out every year. The year may be 2015, but in terms of diversity in front of the camera and behind it, the entertainment industry still has a long way to go. That's what made Matt Damon's recent comments on diversity in Hollywood during a recent episode of his HBO documentary series Project Greenlight so very frustrating: Damon doesn't seem to understand why the lack of representation in Hollywood behind the camera is such a problem. Luckily, informed viewers do understand, and Twitter users as well as several media outlets including Mic, Jezebel, and Flavorwire were quick to point out just why Damon was in the wrong. Now, Damon is responding to his critics in a statement to Buzzfeed News — but, unfortunately, he seems to have missed the point entirely.

Damon's original controversial comment came during an exchange with Dear White People producer Effie Brown. Brown, who was featured as a consultant on Damon's director-finding doc series Project Greenlight, suggested that Damon consider a non-white directing team behind the upcoming comedy Not Another Pretty Woman, as one of the main characters in the film is a black female prostitute. Brown was arguing that a non-white director might spend more time making sure that particular role was handled with sensitivity when Damon interjected that "when we’re talking about diversity, you do it in the casting of the film, not in the casting of the show.”

Damon is half right: we do need to see more stories where non-white actors are featured onscreen. Unfortunately he completely overlooked the fact that we also need is a diverse team behind the scenes who can make sure that these stories are handled respectfully. Considering that the film that this season of Project Greenlight seeks to make seemingly features only one black woman who works as a prostitute, it makes sense for Brown to want to fight for directors who have the experience and incentive to make sure this character is treated as more than a mere trope.

Damon clearly saw that people were peeved by his comments, which is why he went to Buzzfeed News to clarify his comment. Unfortunately, it didn't exactly help the situation — and proved that Damon doesn't understand the real issue here.

Damon may be "sorry he offended some people," but I'm not completely sure he understands why his comments were so problematic. He never clarifies whether he believes that diversity behind the camera is significant, or even suggested that his comments were taken out of context. That's disappointing — especially considering the influence that Damon has on Project Greenlight, which seeks to find new filmmakers and could be a force in giving diverse directors their fair shot.

In fact, Twitter is so annoyed by this psuedo-apology that the hashtag #Damonsplaining is now a thing:

Damon is right in that it's important for people to continue talking about diversity in Hollywood (though he certainly didn't start the conversation) but what could really make a difference is for people in positions of power to take the issue seriously. If Damon truly cares about diversity in Hollywood, he has the influence to make real changes. He has the platform, and it's disappointing that he seemingly has no interest in using it.