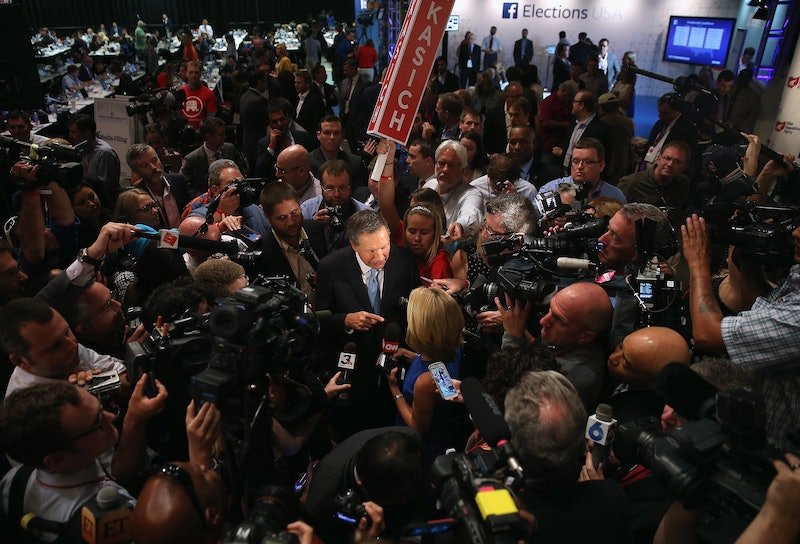 I stand in awe of Twitter. I really do. The insights shared on the social media platform throughout the GOP debate on Thursday evening were, as always, clever, insightful, and sometimes just as absurd and scary as the candidates' comments themselves. It was anyone's guess how the second GOP showdown in the race for the 2016 presidential nomination would turn out. And as I always do with large scale political events, I turned to Twitter to get the general low-down on the public's opinion. There always seems to be that one perfect tweet that encapsulates the theme of any big event, and the debate was no exception. The one tweet that sums up the GOP debate is hilarious, and so on point that it almost hurts (from laughing so hard, that is). Which is really all I ever want and need from Twitter.

Which is not to say there weren't tons of great tweets about the debate that kept us all up to speed on who was saying what. And there was also no shortage of flat-out hilarious tweets. (I mean, did you see the memes?) But this is the glorious 140-character statement that I feel says it all, and then some:

I admit that I haven't even thought about Minnie Driver in at least five years. But she is fully back on my radar after completely nailing everything my little heart feels about the three-hour marathon debate. Just the image in my mind of a 40-years-younger Jeb Bush toking up was delightful enough, but Minnie's drop-the-mic tweet sealed the deal on like, a totally epic debate, bro. And I totally agree about the ties ... just garbage for neckwear.