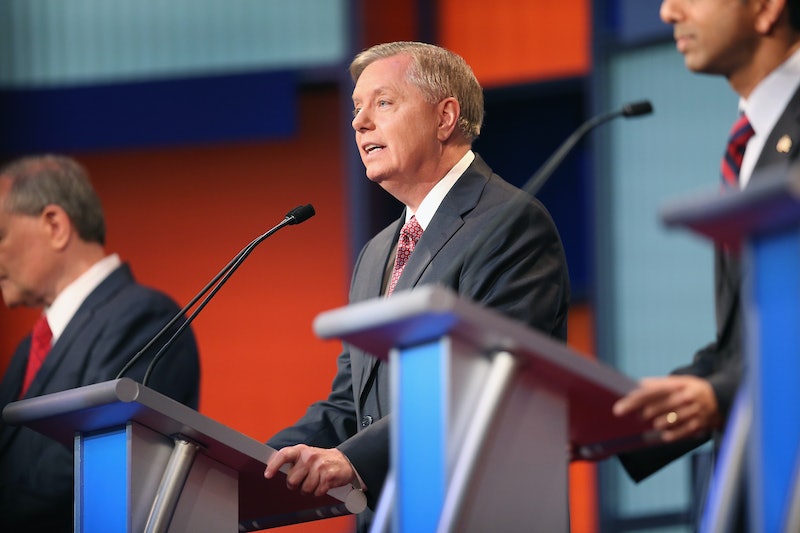 Well, the second Republican undercard debate for the 2016 presidential election is in the books. The so-called "kiddie table" debate was not exactly the entertaining political blockbuster that is expected of the prime-time debate, but that's not to say that there weren't some ... interesting moments. If there's one way these low-polling candidates never let us down, it's in the "saying terrible things" category. Without Carly Fiorina to set the standard for articulate and on-message commentary, it seems that The Last Place Republican Boys' Club was all the more bumbling and absurd. In what CNN's John King is calling the "still the getting to know you phase" of these early debates, the undercard GOP candidates are apparently not making laudable first impressions on their voter base. Nor did they do themselves any favors with some of their remarks on Wednesday evening.

Some of the worst quotes from the GOP forum went beyond the typical conservative dogma and into the realm of the supremely offensive. Many such remarks related to abortion rights, and immigration policy. The comments were not only cringeworthy in their ignorance, but were also out and out offensive. Here's the worst of what came out of the kiddie table debate on Wednesday.

Well, the non-controversy about Planned Parenthood and the non-sale of fetal tissue has been thoroughly and repeatedly debunked.

"You've got to learn our language ... It's a good thing." — Lindsey Graham

It was only a matter of minutes before the candidates began making racist comments about Mexican immigrants to the U.S.

"The president says Fort Hood was an issue of workplace violence. We're at war with radical Islam." — Bobby Jindal

"We have no obligation to condone and accept unjust laws." — Rick Santorum, quoting Martin Luther King, Jr. in his defense of Davis.

"I don't say bad things about her all the time; just when she deserves it." — Lindsey Graham

Lindsey Graham got tough on Hillary about Benghazi.