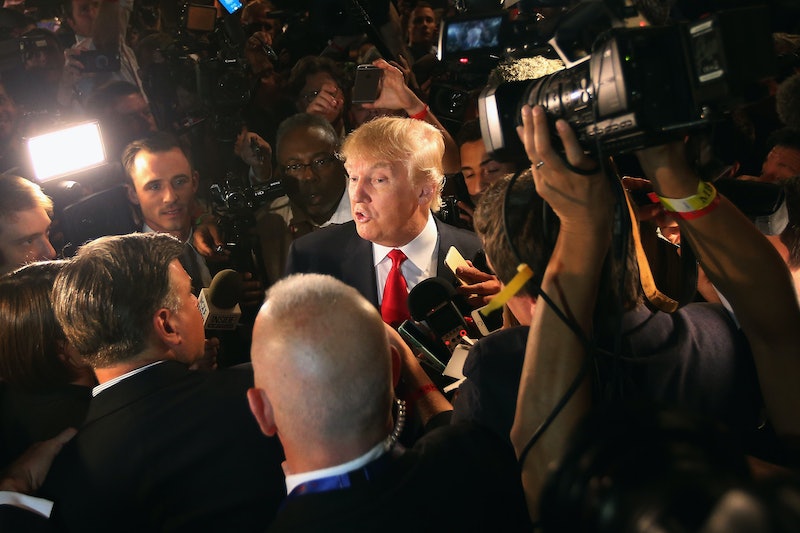 The first Republican presidential debate opened in the most dramatic way possible on Wednesday night, and it was pretty hard to take seriously. CNN showed snippets of a few of the candidates who will be participating in the debate, and paired the photos and videos with dramatic music and a booming announcer, who said things like "They have big personalities!" while video of Donald Trump played on the screen. The dramatic debate opening isn't unique to GOP presidential runs, though. Many of the candidates have cinematic, action-film-like campaign videos that are hard to take seriously.

On Twitter, some characterized the opening of Wednesday's mini-debate as "WWE + Monday Night Football" and an action movie where "the gloves are off." The Survivor-like opening characterizes the Republican debate well. The candidates will be facing off against frontrunner and king of dramatization Donald Trump in an effort to bring some legitimacy back to the Republican Party. Sometimes, when Trump is leading your pack, you have to fight dramatics with dramatics. And that's not as difficult as it sounds -- especially for New Jersey Gov. Chris Christie, whose campaign videos would put the SPCA's "Arms of an Angel" video to shame.

Christie's campaign video, which is titled "Telling It Like It Is," starts out with slow-motion crowd shots and slow music. At the start of the video, Christie says, "I get accused a lot of times of being too blunt and too direct, and saying what's on my mind just a little bit too loudly." But that's just who he is! Then, Christie gets even more serious. He tells heartwarming stories about his family, while the camera shows close-up, constantly slow-motion shots of his face against harsh light and mysterious shadows. He says:

But Christie can't get all the credit for dramatics among GOP candidates. Texas Sen. Ted Cruz's video features emotional photos of his two daughters alongside audio of him describing his father (who was an immigrant) and his mother (who was a pioneer in computer science, "smashing glass ceilings at a time when women were discouraged for following their dreams"). Then Cruz talks about his message of "hope, freedom, and God" alongside sunset images of him leading his daughters around on a horse.

In the video, Cruz said that he has helped America send a clear message that it will stand with it's allies and "against our enemies," alongside a troubling, slightly offensive (though certainly dramatic) image:

And dramatics are called for. We're at a seriously disturbing point in 'Merica's history, people! There's Obamacare, Planned Parenthood is killing people, and now kids are bringing clock bombs to schools. Keep the dramatics coming, Republicans. You could save all of our lives!