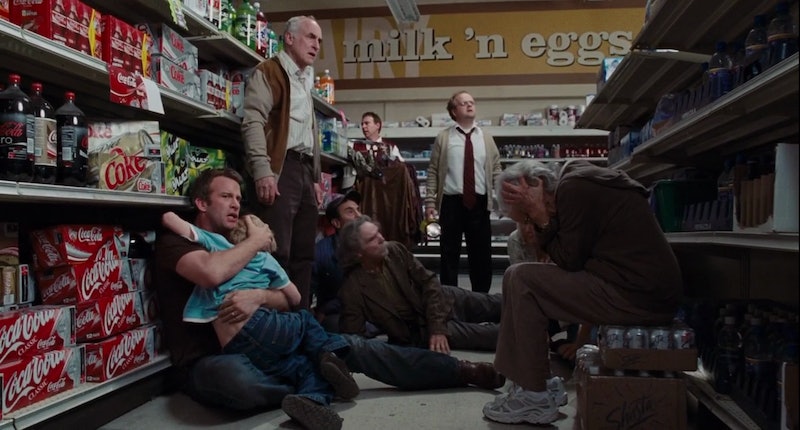 One of the most underrated horror movies of the 21st century so far is coming to TV: Deadline revealed Stephen King's The Mist is being developed for TV by the Weinstein Company's Dimension Television, with King's blessing. Danish television writer Christian Torpe (Rita) will be the series' writer, but there is no word yet on what network the series will land on. Given The Mist's pedigree, there is no doubt the project will find a home in no time, the more pressing question is how will The Mist translate to TV?

The aforementioned film was an exercise in claustrophobic terror. Directed by former The Walking Dead showrunner Frank Darabont, the 2007 big screen version of The Mist found a group of small town residents trapped together in a supermarket after a thick mist rolled into the town. Lurking in the mist were all manner of tentacled monsters/nightmare fuel, but the scariest monsters ended up being the people who wanted to turn to human sacrifice to appease what they assumed was a wrathful God.

The ending was bleak to say the least — and, in an effort to avoid spoilers, let me just say it is not surprising that the show will focus on an entirely new group of characters.

The story was perfect for a movie adaptation because it was so unrelenting in pushing feelings of isolation. Two hours spent in a town blanketed by a mist filled with creatures from the darkest depths of your imagination felt just about right. Though capturing that same feeling in an ongoing TV series is going to be trickier, Bob Weinstein is optimistic about how the story will play out on the small screen. "The terror and drama in Stephen King’s novella are so vast that we felt serialized television is the best place to explore them in greater depth," Bob Weinstein, co-chairman The Weinstein Company and Dimension Films told Deadline. "With this show, Christian has created a fascinating band of characters and a story with infinite scares."

Cinematography is going to be essential for a television version of The Mist. Given that the mist is the most important character, it needs to be dense and oppressive. The characters don't have to go out in it in order for the scares to happen — but when they do, it needs to feel as claustrophobic and foreign as possible.

As for the monsters, there is actually lots of flexibility there — anything could be lurking in the mist and the story could focus in on survival, like The Walking Dead while also being meditative about the nature of the incident like The Leftovers.

With the right combination of scares and characters, The Mist could be a major hit. TV is all about horror right now, but there are no shows that feature Lovecraftian monsters. The landscape is full of zombies, vampires, serial killers, and demons — but actual monsters of the variety that populated classic horror storytelling? That would be something new to add to the horror landscape on TV, and new is always great.

Given that the project has King's blessing, I have a feeling Torpe must have cooked up a killer script. The Mist has all the makings of the next great horror series. With a sprawling horrorscape of inescapable darkness to explore, The Mist could go on for years without ever repeating a storyline. Count me in!