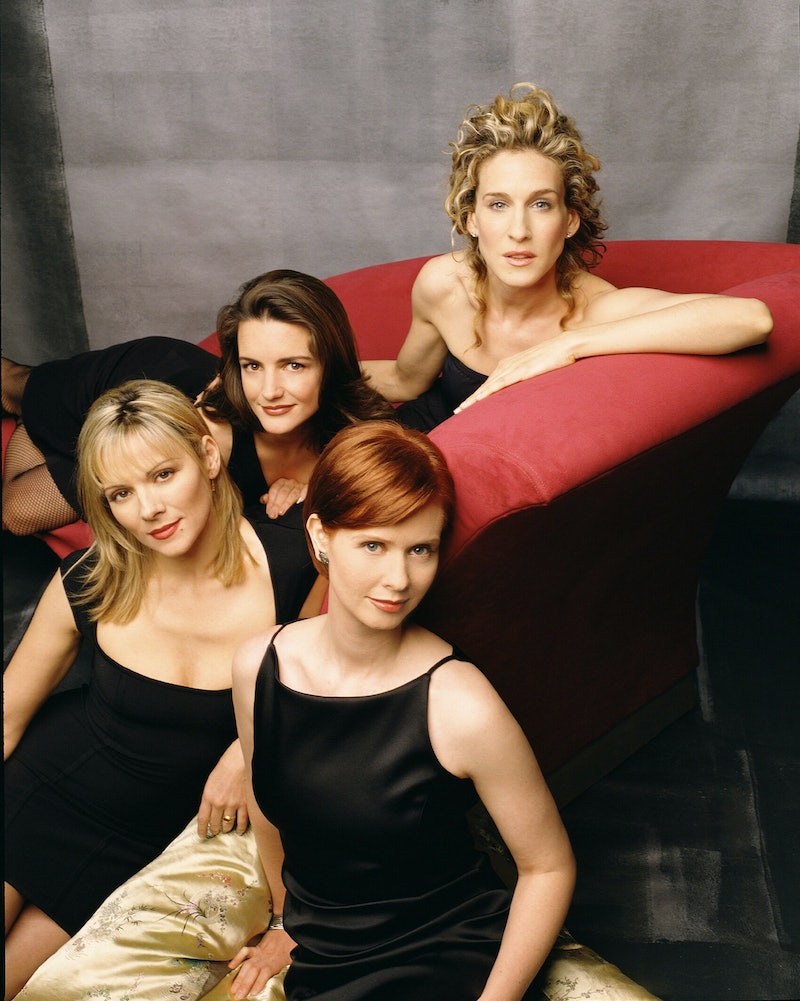 If you've dreamed about finding your very own Mr. Big, scoring invites to the hippest New York parties below 14th Street, and being able to afford a one-bedroom on the Upper East Side and dozens of Manolos despite your only source of income being a weekly newspaper column... well, keep dreaming, sisters. That's probably not going to happen. Luckily for you, though, you can still live out those fantasies vicariously through Miranda, Samantha, Charlotte and Carrie, because Sex And The City is officially streaming on Amazon Prime. That's right, Amazon Prime users: you can now watch every single episode of Sex And The City online, just like your friends with HBO Go have been able to for a few years now. (Let's hope at least one of them was kind enough to loan your their password.)

This news is huge for fans of the series, who are now free to marathon the New York City-set comedy like it's their job. (Sorry, but unlike Carrie's gig, this one won't allow you to afford a closet filled with designer tutus.) If you have a few pals who are just as hooked on the HBO series as you are, then an official Sex And The City viewing party is in order. Get carried away and throw a seriously epic bash with these seven tips:

1. Find Out If You're A Miranda, Samantha, Charlotte Or Carrie, And Dress Accordingly

Would Carrie ever actually wear a screen-printed tee shirt? Unless the label read Alexander McQueen, it's doubtful. That doesn't mean you and your friends can't get cozy in one of these awesome tee-shirts from CafePress — matching tutu totally optional.

2. Mix Up A Batch Of Cosmopolitans

Nothing screams girl's night in like a batch of pink cocktails. Find a sweet (some might say "sickeningly sweet," but I am not one of those people) recipe on Pinterest and get mixing! Bottoms up.

Sex And The City made your favorite childhood birthday treat super trendy, so take it one step further by using fondant to shape tiny Chanel purses and the city skyline.

4. ...Or Pick Some Up From Magnolia Bakery

If you live near a Magnolia Bakery location (which, in the United States, means you live in Chicago, Los Angeles, or NYC) make like Carrie and Miranda and score some party cupcakes from this sweet staple. While you're there, may I also recommend the banana pudding?

Your going to need more than cupcakes if you're marathoning for the long haul. Things you'll need for New York-centric sustenance include pizza, bagels, pizza bagels, and lots and lots of deli meat. It's the NYC way.

Basically, just take a shot every time Samantha makes a sex pun that would make your mother cringe.

7. Refuel After Each Season With Some Carrie-Approved Caffeinated Beverages

Once you start watching, you're not going to want to stop. You're going to need an espresso before Season 3 kicks off so you can stay awake for all of the Mr. Big/Aiden action.

However you celebrate the arrival of Sex And The City on Amazon Prime, make sure you have your best girls with you. Carrie would so approve of that.