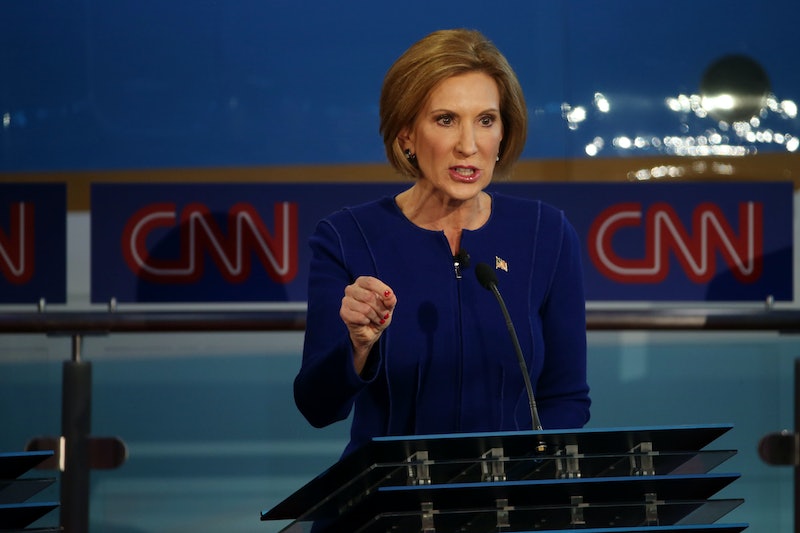 Wednesday's Republican presidential debate got pretty heavy right from the get-go, when CNN moderator Jake Tapper asked the the candidates whether they would feel comfortable with Donald Trump's finger on a trigger for a nuclear missile. Former Hewlett-Packard CEO Carly Fiorina wouldn't answer the question directly, but her subtle jab at Trump's character was pretty clear. For the rest of the debate, Fiorina's Trump putdowns only got more pointed and clear. You can only be nice to The Donald for so long before it gets really old.

Fiorina hasn't been polling anywhere near Trump's first-place run, so she had to step up her game during the debate. And many Twitter users believe she did just that. Fiorina delivered on foreign policy and gave a unique — albeit kind of annoying — answer about why a woman shouldn't be put on the $10 bill. A number of Fox News analysts declared her the "big winner" of the night for standing up to the pushy male Republican field. Regardless of whether or not you actually support Fiorina and her policies, her four best takedowns of Trump showed that she wasn't going to take anymore of his crap, but that she also didn't want to stoop to his level by dishing insults.

On How She Feels About Trump Having Control Over Nuclear Missiles

When Tapper asked Fiorina if she would feel comfortable with Trump's finger over a nuclear missile launch button, she wouldn't answer the question directly. Rather, she was super classy, saying, "I think Mr. Trump is a wonderful entertainer" but "that's not for me to answer." Fiorina said that campaigns are useful because they help reveal specific details about a person's character:

I think all of our characters are being revealed over time & under pressure, including Mr. Trump’s.

When Tapper pushed Fiorina to answer whether Trump should have the capability to launch nuclear missiles, she simply said, "It will be revealed." And Trump was not happy.

After Trump tried to stumble through a question about how the U.S. should engage with Russian President Vladimir Putin, Fiorina stepped up and laid down a response so informative that it silenced the rest of the candidates and drew applause from the debate crowd. Trump joked that he might be able to get along with Putin and solve all of the U.S.'s problems:

Fiorina quickly pointed out just how absurd this response is. It doesn't address the years of history and policy that have shaped the U.S. relationship with Russia and Russia's relationship with the Middle East — and every other country:

Having met Vladimir Putin, I wouldn't talk to him at all. We've talked way too much to him. What I would do, immediately, is begin rebuilding the sixth fleet. I would begin rebuilding the missile defense program in Poland. I would conduct regular, aggressive military exercises in the Baltic states. I'd probably send a few thousand more troops into Germany. Vladimir Putin would get the message. By the way, the reason that it is so critically important that everyone of us know General Soleimani is because Russia is in Syria right now because the head of the Quds Force traveled to Russia and talked Vladimir Putin into aligning themselves with Iran and Syria to prop up Bashar Al-Assad. Russia is a bad actor, but Vladimir Putin is someone we should not talk to, because the only way he will stop is to sense strength and resolve on the other side, and we have all of that within our control.

Though some Twitter users were critical of her idea — to not speak to adversaries — Twitter users generally agreed that she schooled Trump, yet again, without even saying his name or attacking his person.

On Trump's "Look At That Face" Remarks

Tapper asked Fiorina about Trump's recent comments to Rolling Stone, in which he said "Look at that face!" while watching Fiorina on a news broadcast. "Would anyone vote for that? Can you imagine that, the face of our next president."

Trump simply responded, "I think she's got a very beautiful face and I think she's a beautiful woman." The Internet was so proud of Fiorina's relaxed sass.

Trump decided to attack Fiorina when she touted the work she did as the CEO of Hewlett-Packard during the economic crisis. He said that she put the company further into debt, and that hundreds of people lost their jobs because she was a poor CEO. Fiorina fired back, saying that she found it "quite rich" that Trump would attack her work as a businesswoman when Trump has used other people's money to pay for his casinos when they were in debt:

That is precisely the way you ran your casinos — you ran up mountains of debt using other people’s money and you filed for bankruptcy, not once, but three times. Why should we trust you to manage the finances of this nation any differently than you managed the finances of your casinos?

Trump tried to respond, but he stumbled over his words and claimed that he has never filed for bankruptcy. Fiorina was obviously tired of being trampled on by a candidate who uses personal attacks to get ahead.