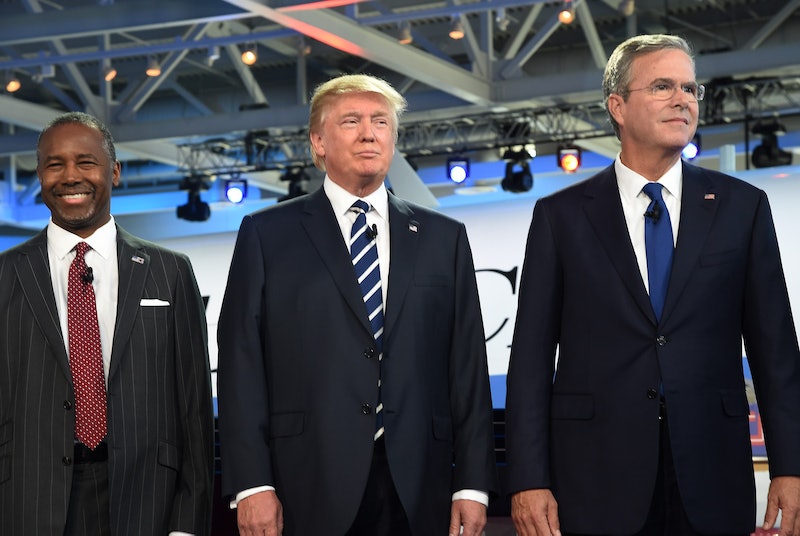 Throughout the entire GOP debate, Donald Trump and Jeb Bush have been throwing each other some massive shade, and there are some Bush and Trump memes floating around that are almost as funny as the real exchanges. Most debate viewers expected Trump and Bush to go for each other's throats during the debate, and they certainly were not disappointed. But one of the most heated exchanges of the night came when Bush mentioned how he successfully blocked Trump from building casinos in Florida during Bush's tenure as governor. According to Trump, this was patently false, which resulted in a heated exchange.

The fight was building — Bush was attempting to point out Trump's friendly nature with Democratic candidates, while Trump continued to dismiss Bush. The entire interaction was marked with Trump exclaiming, "Wrong!" while Bush stared straight ahead at the camera like he was on an episode of The Office.

According to Twitter, the Trump versus Bush standoff was one of the highlights of the night, with many delighting in the exchange. While some had difficulty determining who had won the fight, many of the memes make Bush look like the winner — or at least the most exasperated.

Hands down the best moment, however, was Trump's subtle dig at Bush's past debate performance. "More energy tonight, I like that," Trump said. Twitter users seemed to love it.

There probably won't be a clear winner of the Trump versus Bush fight, but I would personally like to nominate Bush's facial expressions as the victor of the night. If the two candidates keep up this level of animosity, there's a good chance that the next debate might end in an actual fight — especially if Trump mentions Bush's wife again.