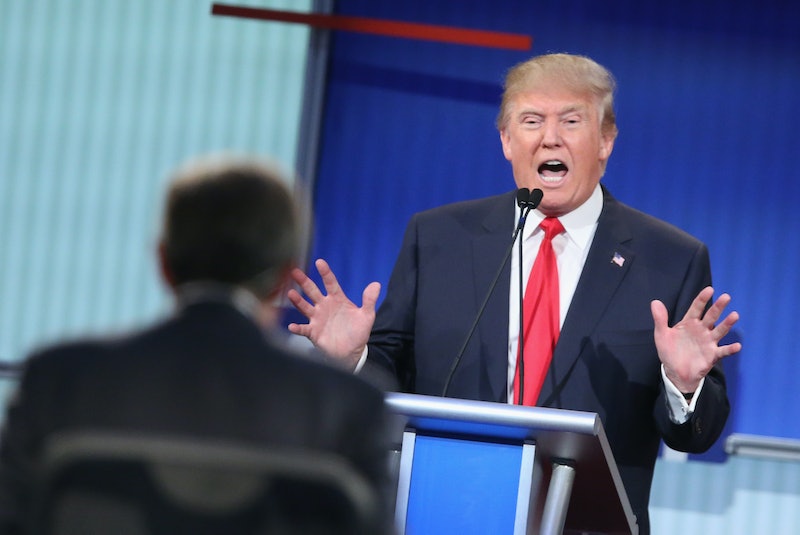 The things that come out of The Donald's mouth shouldn't be surprising anymore, but in one seriously misguided sweeping motion, he has tried to answer criticisms of Republicans' War on Women. During the second GOP debate, Donald Trump promised he'll "take care of women." Did he just seriously infantilize half of the country's population?

Trump's track record with women have been a major blemish on his presidential run. During the first GOP debate, Fox News anchor Megyn Kelly pointedly asked the Republican front-runner whether his past comments disparaging women and their looks would hurt his chances with female voters. His pushback, which included a dig at comedienne Rosie O'Donnell, spun a whirlwind of criticism that forced him to repeatedly declare how much he "loves women."

That stance was back during the second GOP debate. When asked about women's rights and women's health care funding, Trump said, "I will take care of women. I respect women." But what makes his statement so shockingly irresponsible doesn't just have to do with his poor history with women. To say he'll "take care of women" implies that women can't take care of themselves, perpetuating the outdated story of a damsel-in-distress who can only be saved by the charming prince.

Vermont Sen. Bernie Sanders responded, "Really? What about respecting the right of women to control their own bodies?"

And Hillary Clinton flat out attacked Trump for his presumptive comments, tweeting, ".@realdonaldtrump should stop complimenting women and start respecting them. #GOPdebate."

There is a reason why Republicans should be afraid of crowning Trump as their presidential nominee. His inability to connect with women is a huge misstep for his campaign, and without their support, he'll never win the White House. Instead of asserting how much he "cherishes women" or "loves women" or "respects women" or will "take care of women," maybe he should spend some time actually putting forth plans that are for women's benefit.