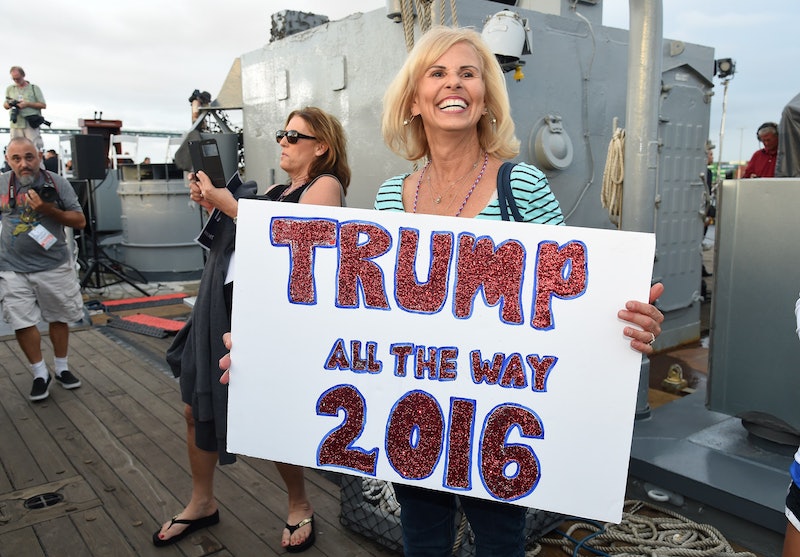 Donald Trump, despite proving us otherwise continually, said that he would be great for women. He once said that he would be better than Hillary Clinton for women's health, in fact, further positing that Clinton "doesn't have a clue," which, uh, OK. His comments about women resurfaced at Wednesday's debate when Donald Trump declared: "I will take care of women. I respect women. I will take care of women." Well, Donald. A lot of women seem to disagree with you.

Seriously, you could feel Twitter's hackles rising as those words spewed out of his mouth. Believe me, there were plenty of things that Trump said that were tweet-worthy. He is almost like a walking meme machine. But a man who has publicly ripped many women and shows a clear disregard for pretty much every female except for Oprah saying that he would "take care" of women? He had to ignite the masses with that one, and oh, it was so good.

Here are just a few of the many, many gems that lady Twitter gave us. Rejoice in their hilarity, and hope to God that we don't have to make those same jokes with him, you know, actually in office.

Aaaand here's the, and I'm so sorry, Trump card:

More like this
Iran Has Issued A Death Sentence Over Mahsa Amini Protests
By Catharina Cheung, Darshita Goyal and Maxine Harrison
Here’s How To Find Your Spotify Wrapped
By Emma Lord and Emma Carey
Here’s How To Turn On Instagram Post Notifications
By Megan Grant and Alexis Morillo
The Correct Way To Start An Advent Calendar, Explained
By Kaitlyn Wylde and Jay Polish
Get Even More From Bustle — Sign Up For The Newsletter