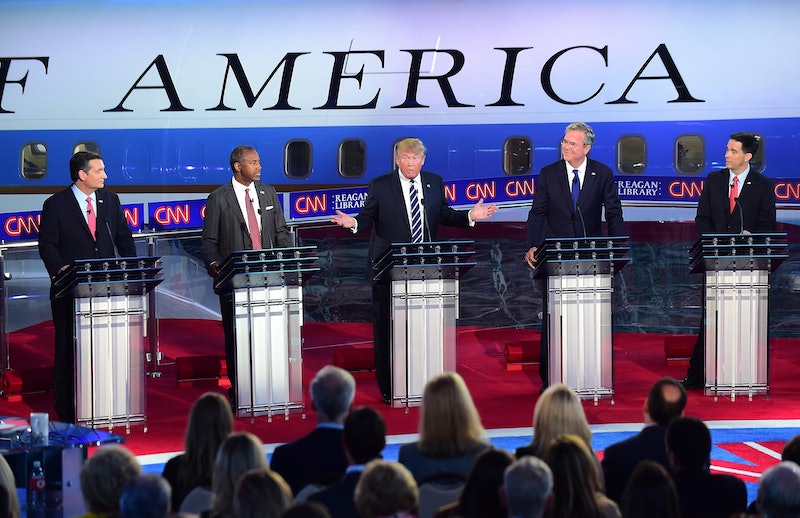 The GOP second debate, which was hosted by CNN and broadcast from the Ronald Reagan Presidential Library, lasted more than three hours and covered myriad topics. The 11 highest-ranking Republican candidates for president argued over ISIS, immigration, and troops in Iraq. A "lighthearted" question posed by CNN moderator Jake Tapper was one of pop culture interest, and an important subject for women's interests groups was regarding the $10 bill. Tapper asked each of the GOP candidates whom they would put on the $10 bill, now that the U.S. Mint has officially determined that (some) newly-minted $10 bills will feature an important woman from American history.

The answers from the candidates ran the gamut from the sappy to the sexist to the completely evasive. It was hard to tell whether any of the candidates had given much (if any) thought to this idea before Wednesday evening, but they all answered pretty darn quickly. And some of them had quite the little explanation for their choice. Women's issues were scarcely mentioned (except when the candidates threw temper tantrums about debunked anti-Planned-Parenthood propaganda), so I suppose talking about the $10 bill is better than absolutely nothing?

From Rosa Parks to Margaret Thatcher (?), these are the women the top 11 GOP candidates would choose to put on the new $10 bills.

Paul said that Susan B. Anthony would be his choice for the $10. Fair enough!

Huckabee stated that he would put his wife on the new bill so that she could "spend her own money." Alright, Huckabee, you're cut off. Go home.

Rubio's choice for the new $10 would be Rosa Parks.

Cruz said that he would opt to change the $20 bill instead of the $10, saying that Hamilton, as a founding father, should stay on the bill. OK, whatever. He then stated that his choice for the $20 would be Rosa Parks, since she was a "principled pioneer."

Trump said he would like to put his daughter Ivanka on the $10 bill, because she had been "sitting there for three hours." He followed up by saying "Or Rosa Parks. I like her." Alright then.

Bush said Margaret Thatcher ("Reagan's partner") would be his choice. Jeb, are you high right now?

Citing time spent working with the Red Cross, Walker said that he would choose Clara Barton.

Fiorina said she wouldn't go through with changing the bill at all, but since women aren't a "special interest group" and make up "half the potential in this nation, we will be better off when every woman has the opportunity to live the life she chooses." Just answer the question, Fiorina!

Stating that his choice was "probably illegal," Kasich answered that he'd want to see Mother Teresa on the bill. To me, it feels odd to place a woman who took a vow of poverty on any currency, but OK. Kasich can dream.

Opening his answer with a statement that "The Adams family" was underrepresented in the currency conversation (oh, brother), Christie said he would choose to put Abigail Adams on the $10.