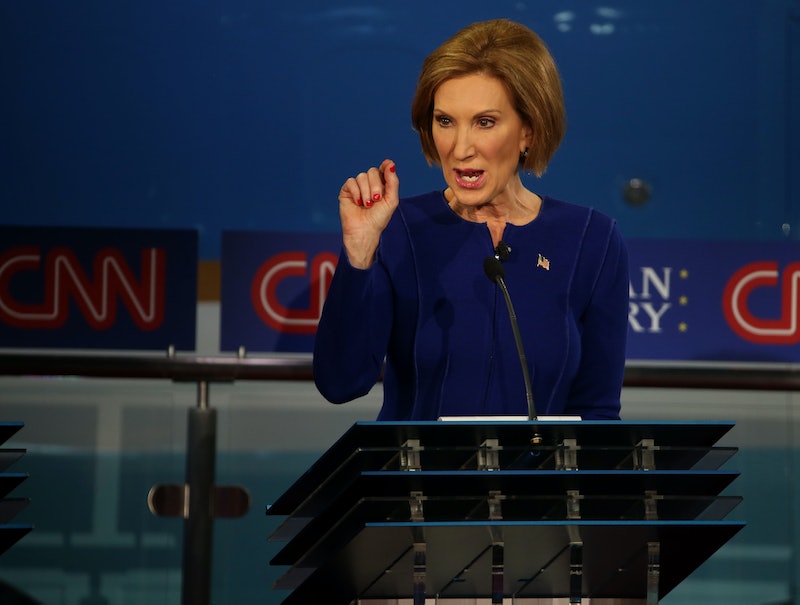 She's willing to stand up against Donald Trump and his treatment of women. She's willing to tout her credentials as the CEO of a major company even in the face of extreme criticism. She's willing to stand on a stage full of men and speak up when she felt like she wasn't being included in conversations about foreign policy. But then she linked the Iran nuclear deal to Planned Parenthood (what?). After Wednesday night's Republican debate, here's the biggest question— did Carly Fiorina help women's rights during the second GOP debate or did she do more harm than good?

Well, it was both.

It's easier to put it in negative terms. Her Planned Parenthood rant could've come out of the mouths of any of the men on stage with her. Building a (somewhat tepid) bridge between the Iran deal and Planned Parenthood, she said that defunding the women's health center was a "defense of the character of this nation." But she didn't stop there. Blasting President Obama's promises to veto any bill that would defund Planned Parenthood, she delivered this impassioned response:

I dare Hillary Clinton, Barack Obama, watch to these tapes. Watch a fully formed fetus on the table, its heart beating, its legs kicking, while someone says, 'We have to keep it alive to harvest its brain.' This is about the character of our nation. If we will not stand up and force President Obama to veto this bill, shame on us!

That, I would venture to say, is one of the more graphic things that we heard from anyone about the Planned Parenthood debate. And it was also categorically false. It combined debunked knowledge, misleading depictions of what is a surgically safe and legal procedure, and an attack on the women and legislators who defend that constitutional right. All in all, not a great look for Fiorina on the women's rights front.

She went on later in the debate to say that a woman shouldn't replace Andrew Hamilton on the $10 bill because it wouldn't actually change anything.

I wouldn't change the $10 bill or the $20 bill. I think honestly it's a gesture. Don't think it helps to change our history. What I would think is we ought to recognize that women are not a special interest group. Women are the majority of this nation. We are half the potential of this nation. And this nation will be better off when every woman has the opportunity to live the life she chooses.

Er, you know what it would change? The severe lack of representation of women in history. If you look at most statues, memorials, and, yes, currency, you'd think the United States was a country founded and run completely by white men. Denying women the chance to be honored as an important part of history isn't helpful or honorable in defending our nation's heritage. It's making sure that people who deserve to be a part of it actually are.

That nugget had another particularly egregious fault wrapped in a seemingly positive statement. No, women are not a "special interest group," but they are a marginalized part of society. Fiorina's rhetoric about the nation progressing when "every women has the opportunity to live the life she chooses" is recycled from her previous statements on feminism.

The reason why Fiorina feels that women are being treated as "special interest" is because women are still marginalized in society. We can't live the life we choose until we are given the same opportunities as men. So, hell, so what if there was a conscious effort to put a woman on the $10 bill? That's because, for so long, that wasn't even an idea that crossed anyone's mind. Still, I can't think that very same rhetoric that would make the ghost of Simone de Beauvoir rise in feminist rage also says something very positive about Fiorina and women's rights.

Can every woman choose the life that she wants to live? No. Absolutely not. But Fiorina had opportunities presented to her that enabled her to achieve amazing things. Those opportunities, coupled with hard work, got her on a debate stage full of men, running for the highest office in the land. Without women like Fiorina (or Hillary Clinton, who, too, was put into a position of privilege), there would be no examples of women striving for something more than presidency of their philanthropy. We need examples to let us know that these dreams are possible, even if the path isn't quite as easy.

And, to be fair, Fiorina wasn't exactly espousing her beliefs as feminist rhetoric. She's said before she is a feminist (which has split opinions on what that exactly means) and certainly that is important when she contradicts herself (ahem, Planned Parenthood). But who are we to say that powerful women can't have some secondary effects on the empowerment of women? None of us are perfect, and if Fiorina is up there, believing (and proving!) wholeheartedly that she can take on any of her opponents with a vengeance, I would argue that is a pretty powerful message to women.