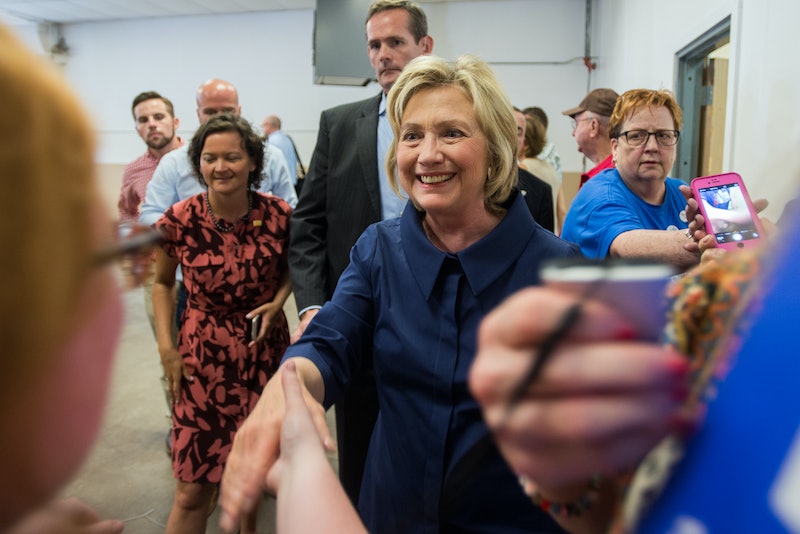 During Hillary Clinton's first appearance on The Tonight Show, Jimmy Fallon went in deep, asking which one issue she believes defines her campaign. It turns out that it's raising American incomes, which was a slightly surprising comment from Clinton, who has championed multiple causes as key parts of her platform. Some might have thought she would advocate for women's issues or pick out her climate change initiative. But Clinton aimed to highlight an issue that would resonate with pretty much everyone.

The question was one of the few serious moments during her interview. Airing as it did after the second Republican primary debate, much of the segment focused on making fun of Donald Trump. But as the interview came to an end, Fallon sought to provide Clinton with several opportunities to further her campaign.

Clinton highlighted her economic efforts, saying that "getting more money into your paycheck so that you can have a better chance and a better shot," was the one issue that made up the heart of her campaign, just as immigration has dominated Trump's. But instead of having Clinton elaborate further on how she would do this, Fallon switched gears to ask her about her new college affordability plan.

"I've got a plan so that if you go to a public college or university, you will not have to borrow money to pay tuition," Clinton said. "And I have a plan to lower the debt, reduce the interest rates, give people a chance to work it off." She was, of course, referring to her New College Compact plan, which she rolled out earlier this summer. The Compact, which operates on a 10-year plan to lower college prices, is one of the most detailed and comprehensive pieces of policy her campaign has unveiled as of yet.

Clinton and her staffers spent the bulk of the summer raising awareness for the campaign through the use of quizzes, infographics, and (unfortunately) emojis. Which is why it's mildly surprising that she didn't lead with the college plan — which surely appeals to younger voters.

"We've got to get out from under the twin problems: that college is not affordable and debt is just so burdensome. So I'm addressing them," Clinton told Fallon. As part of her college affordability plan, Clinton aims to enable students to renegotiate their student loans at lower interest rates.

Maybe this is a sign of the next Clinton campaign shift, as she returns to the economic plan that she unveiled in early July. Much of the media focus has been on the higher education side of Clinton's plan. Clinton may not have been able to elaborate during her interview with Fallon, but come fall, we may truly find American incomes at the center of her campaign again.