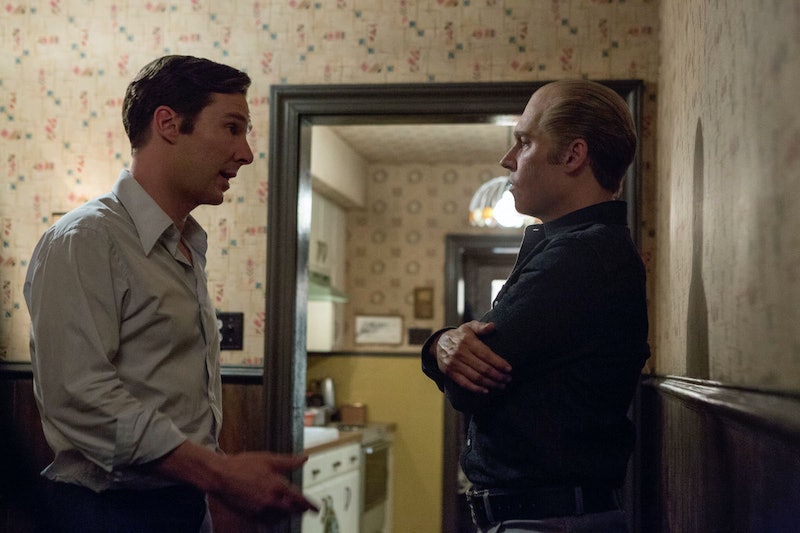 Johnny Depp is a master of portraying larger-than-life figures in biopics, and in Black Mass, he adds another role to his resume with his performance as Boston mob leader Whitey Bulger. But Depp isn't the only star to portray a Bulger in this film; Benedict Cumberbatch appears as Billy, Whitey's brother who was president of the Massachusetts State Senate during some of the time that Whitey was an active criminal. The story of the two drastically different brothers is a critical aspect to the film and became a real-life media sensation. Whitey is currently in prison on a life sentence, but what happened to Billy Bulger?

It's been a tough ride for the former politician — and it's all because of his relationship with his brother. He was named the president of the University of Massachusetts in 1995 but was later forced to resign after refusing to give details about his brother's activities (or implicate himself) when testifying for a Congressional committee in 2003. When Whitey was captured and brought to trial in 2011, Billy once again refused to comment on his brother's criminal involvement. He continues to visit Whitey in prison, for which he receives much criticism by a media that is still aghast at the scope of Whitey's crimes. Billy has not backed down, though, telling news outlet WVCB, "Just because I visit him, doesn't mean I condone it....I don't try to sort it out any longer. I just try to be a brother."

Black Mass' portrayal of the Bulger brothers is particularly interesting because it's based in truth, but there have been many fictional films which have portrayed similarly rocky sibling relationships. Here are a few memorable sets of movie brothers whose bonds were deeply complicated.

After Sam Cahill (Tobey Maguire) goes MIA while on duty in Afghanistan, his brother Tommy (Jake Gyllenhaal) steps up to take care of Sam's grieving family. But things get messy when Tommy's relationship with Sam's wife gets more intimate — and then Sam unexpectedly shows up to reclaim his old life.

This over-the-top comedy is a story about two children of single parents reacting poorly to said parents remarrying and creating a new family unit, complete with step-siblings. The catch? The "children" are grown-ass men, played by Will Ferrell and John C. Reilly. This movie includes a valuable lesson about why adults shouldn't attempt to sleep in bunk beds.

While obviously not the focus of this series, one of the most interesting gaggle of siblings in popular books/movies is the Weasley boys. Their relationships are fraught with sibling rivalry, particularly between perfect Prefect Percy and his more rebellious brothers. There's also a lot of taunting, as twins Fred and George frequently gang up on younger Ron. As if being a ginger and standing in the shadow of a world-famous best friend wasn't enough...

Sibling relationships can be incredibly complicated, as the story of the Bulger brothers demonstrates. Billy's loyalty to his brother has cost him a lot personally and professionally, and the events that led to this outcome are the focus of Black Mass. Billy doesn't begrudge the film for rehashing all of this, though. In fact, he told the Boston Herald that he'll probably go see the movie at some point. You can see the film, too; Black Mass is in theaters now.