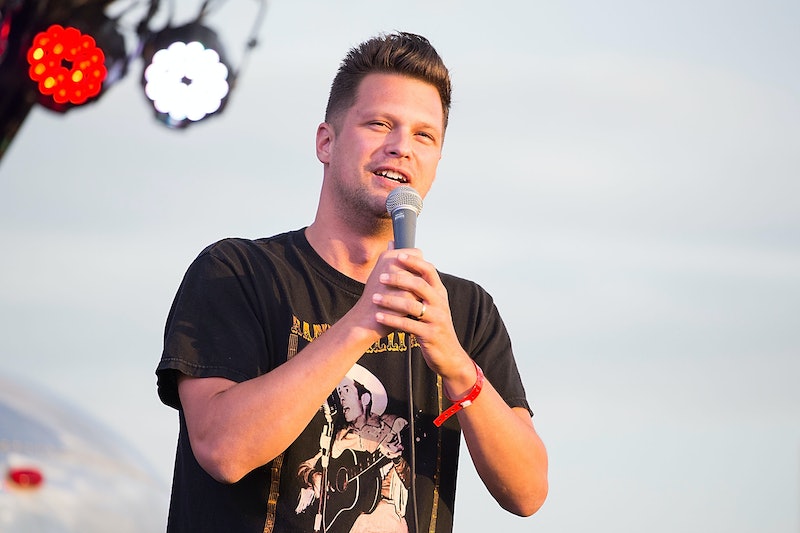 There are many shows that put a comedic twist on the news of the day. There are also a bunch of competition shows out there. But only one, We Have Issues, which premieres on E! on Sept. 18, manages to be both at the same time. In it, Julian McCullough and Annie Lederman go through the biggest pop-culture headlines of the moment, then duke it out to see who could come up with the best joke about each subject. (It reminds me of the old Weekend Update "joke-offs" from Saturday Night Live.) But just who is We Have Issues host Julian McCullough, and what makes him fit to riff on our pop-culture news?

Obviously, McCullough and Lederman are both comedians — otherwise the show wouldn't work at all. According to E!, he won New York’s Funniest competition in 2011 and has performed at the at the Just For Laughs Festival and the Edinburgh Fringe Festival. But McCullough hasn't just been doing the comedy-club circuit — he's also had a number of TV appearances, including his own Comedy Central stand-up special. Here's what you need to know about McCullough. But first, my favorite SNL joke-off, because I can't resist the opportunity to post this again.

McCullough and Lederman, you've got a lot to live up to. Now, on to McCullough.

He's Got A Ton of TV Experience

In addition to his Comedy Central special, McCullough has been on The Tonight Show, Conan, Chelsea Lately, The Soup Investigates, @Midnight and, my personal favorite, Inside Amy Schumer. We Have Issues should be a piece of cake for him.

He Even Had A Pilot Made About His Life

The show is called Poor House . "It’s about me starting high school as a new kid in Moorestown, New Jersey, which is one of the wealthiest towns in America and we were super poor," McCullough told The Hundreds. "So it was like an ’80s movie, but nobody knew karate." Ed Helms even produced it. So far, it hasn't been picked up anywhere.

I know what you're thinking: Aren't there enough shows that do jokes about the news of the day? We Have Issues is going to be different in that it will stick to the world of celebrities and pop culture. When asked in an interview if anything will be off limits for the show, McCullough answered, "Real news. I don't think we're going to do any politics." Leave that for The Daily Show.

But He Can Be Highbrow

McCullough once did an episode of This American Life , about going home with someone else for the holidays. Listen, if you can make jokes and then turn around and do an episode of a public radio show, that's proof you have range, right?

He's A Big Fan Of The Smiths

He Has An Adorable Daughter

Her name is Goldie, and his Instagram feed is full of pictures of her. I don't know if the rest of you will find that as heart-meltingly adorable as I do, but, it's good to know that, after issuing caustic jokes about celebrities on We Have Issues, McCullough has a softer side.