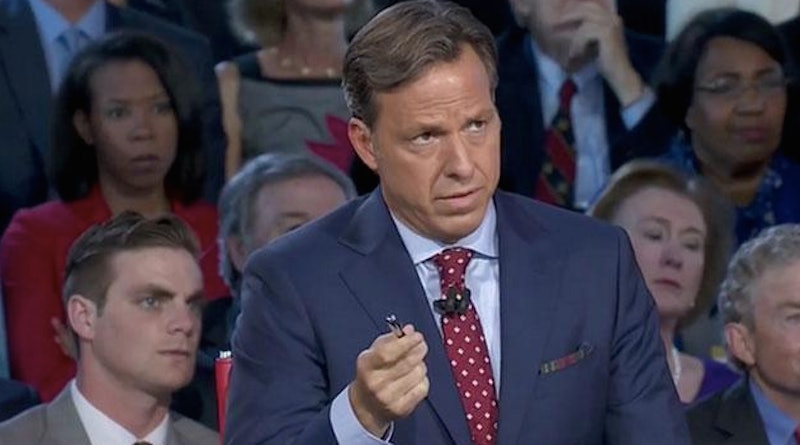 Though all the crap that was spouted last night, those watching the Republican debate picked up on one important thing: the hot guy sitting behind GOP debate moderator Jake Tapper. The man in question made many a woman swoon, even Bernie Sanders supporters. While he's not exactly my type (I'm not into the chiseled football bro look, sorry), I can definitely see the appeal. Especially if you're into jaw lines, because man, is this guy rocking one. The man in question turns out to be a guy by the name of Gregory Caruso, and I'm quite glad he managed to channel some attention away from the bull that was going on onstage.

CNN managed to track hot guy Gregory down and confirm that he's actually as hot as people believed him to be while watching the debate last night. Gregory is an aspiring filmmaker who lives in LA (sorry, but date-ability just plummeted), and unfortunately doesn't have any social media accounts for you to stalk. Although US Weekly reported that his father is a wealthy real estate developer, so if family money is your thing then date-ability just went back up. I'm still not sold. He is, of course, a Republican. Gregory is currently working on a crowdfunded documentary called Making The American Man, which more important than being an admittedly interesting look at masculinity by talking to people who make men's products, it's given us this photo of Gregory with a beard, which I think is much better than Gregory without a beard:

Here are some more pictures of Gregory for your morning eye candy, and to get your mind off all the insane things that were said by GOP candidates:

1. Here He Is Looking, Actually, Pretty Presidential Himself

2. Here He Is Looking Like He Starred On Gossip Girl

3. Here He Is Listening To Someone Say Something Clearly Stupid

4. Here He Is Auditioning For Calvin Klein

5. And Here He Is Plotting Something Clearly Diabolical

There you have it, everyone. The extent of Gregory Caruso stalking you can do online.