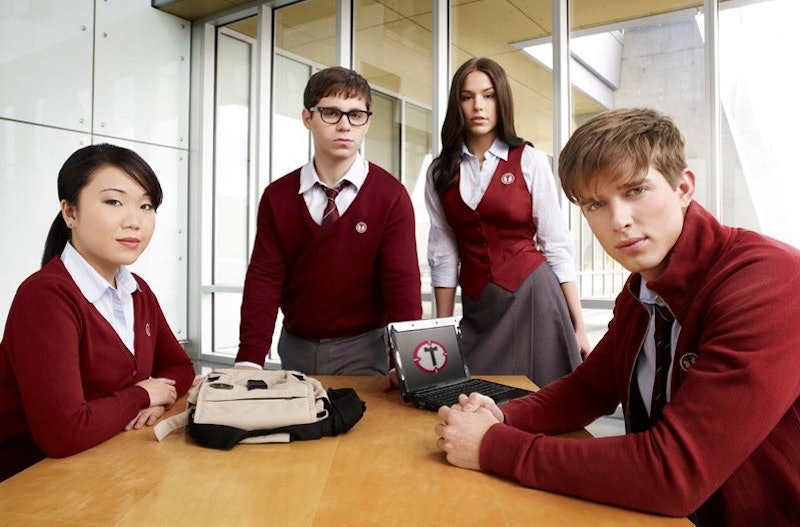 Feel like fanning the flames of your feminist fire pit this afternoon? Then hop on over to Kevin Smith's "Fat Man on Batman" podcast, where he and Tower Prep creator Paul Dini discussed why girls were the reason Cartoon Network canceled his series in 2010. Feel the burn, ladies: It rages slow and steady on this one! Because girls are the worst!

An hour-long live-action series, Prep was a departure for the network's typical fare, but not its first toe in the water in that regard, either. It featured several students sent to an exclusive school to learn the ways of their special abilities and powers. It received favorable critic reviews, and ratings increased slightly over time. But still, the network decided not to renew the series after its first season.

So why exactly were women responsible for the show's demise after a single season? According to the Prep showrunner, the executives over at the network were apparently all equality-smekshmality, girls aren't good for our brand. Their stance was, as Deni describes: "'We need boys, but we need girls right there, right one step behind the boys' — this is the network talking — 'one step behind the boys, not as smart as the boys, not as interesting as the boys, but right there.'"

Yep, someone implied that, apparently. Out loud, to another human.

But that's not all. Dini's chronicle of the misogynistic drama surrounding the cancellation of Tower Prep did not end there. "[The TV executives] are all for boys," explained Dini. "I mean, I’ve heard executives say this, you know, not [where I am] but at other places, saying like, 'We do not want girls watching this show.'" And why don't they want girls? Because: toys, of course.

Gadgetry and gizmos and gewgaws aplenty — just as long as they're not all of the girly kind. "We had a whole, a merchandise line for Tower Prep that they shitcanned before it ever got off the launching pad," Dini explained. "Because it’s like, ... 'Boys buy the little spinny tops, they buy the action figures; girls buy princesses, we’re not selling princesses.'" Which is hilarious because: a) really? The ole princess argument, still? Was I just transported via bullshitmobile to 1942? And b) no one's asking you to sell princesses.

An undeniable truth about the television landscape today is that it's largely driven by marketing and advertising sales — or at least, the ability to sell a show to not just a small screen audience, but beyond the confines of that screen. Namely, via products. For a network like Cartoon Network, that would be toys. But they've somehow deduced that girls don't buy toys, or make good enough television viewers.

Not that this is a new problem, it just sucks extra hard because Dini is no slouch. He's a professional working in both television and comic books (like Star Wars: The Clone Wars, Scooby Doo, Batman: The Animated Series, and more), yet, we still are being forced to fight this battle with him in 2013. To hear him confirm, as an insider, some of our greatest fears — that girls only get to be princesses and boys, well, everything else — is truly disheartening. And an egregious oversight on the executives' part.

But guess what? Other networks have managed to target girls and found out (spoiler alert!) girls totally buy toys. Just ask Nickelodeon. This probably means marketing and production executives need to re-focus themselves in order to figure out inventive, creative ways to sell their female characters not only to girls, but to the boys.

And, HOLY SHIT, you guys, there is literally nothing wrong with creating some strong female role models for young girls and boys (the AND is so important!) to look up to. In fact, doing so might give rise to a whole host of positives. Crazy, right? Crazy to think that there might be something out there that you cannot decipher from marketing data alone, isn't it?

Because guess what? There are shows that exist out there in the world that are female-fronted by strong, interesting girls that get good ratings. Some of them are even cartoons! I mean, shit, winsome weirdo Tina Belcher on Bob's Burgers is the most-beloved character on that show. And though it's not a kids' show, it is a show with a largely male audience and the men, believe it or not, love this nontraditionally framed female character.

The executives who decided the fate of Tower Prep seemingly still live in a dated universe where blue is boy and pink is girl. We need people in charge who are actually up for the job of creating quality entertainment, even if that, gasp, means giving up their princess dreams.