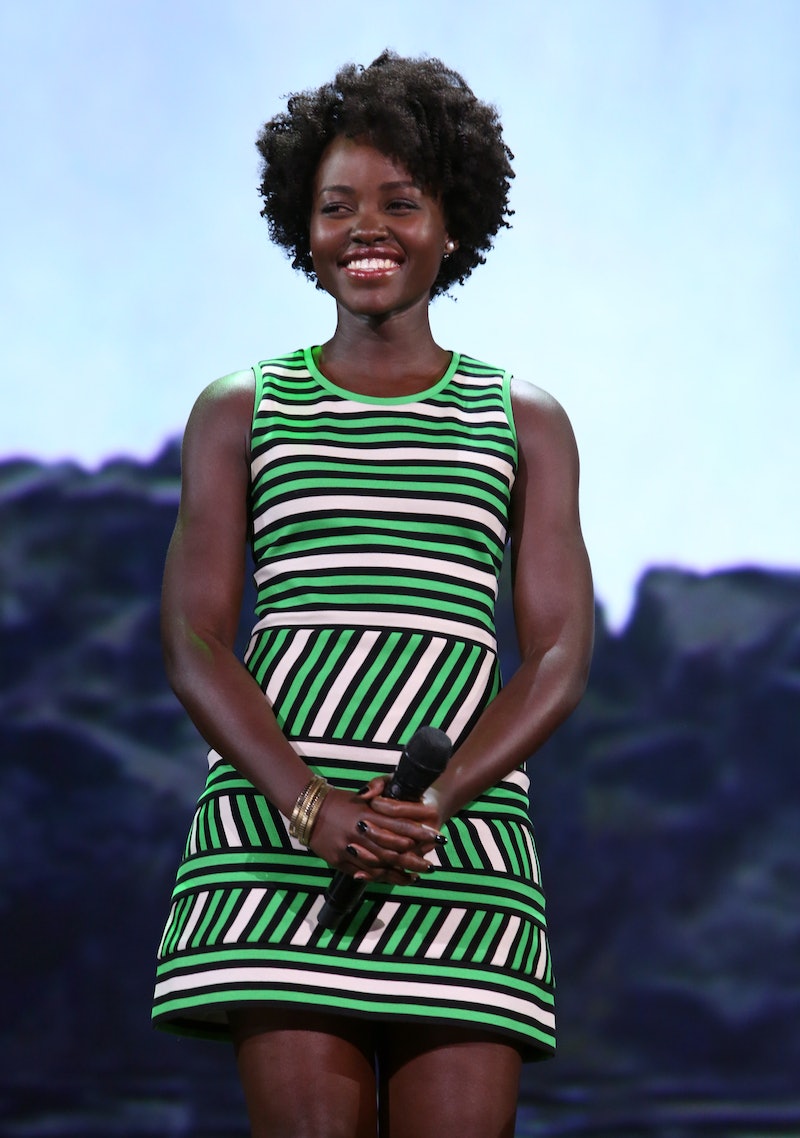 Lupita Nyong'o has been slaying in Hollywood ever since she nailed her role in 12 Years A Slave in 2013. With her big Oscar win, her solidified status as a fashion icon, and her dedication to activism in her home country of Kenya, she is a force to be reckoned with. And with her upcoming role in the newest Star Wars movie on the horizon, it is clear that she does not seem to be slowing down anytime soon. And for good reason. But on top of all that, the actress has also proved time and again that she's a role model. In fact, Lupita Nyong'o said so many inspiring things during her Vogue interview this September.

In her Vogue cover story interview, Nyong'o continued to prove, as she has been proving for quite some time now, that she is much more than a pretty face. From overcoming racial stereotypes when first pursuing an acting career to working through obstacles that she came across in her schooling days, she has not only challenged these obstacles and stereotypes — she has conquered them. Nyong'o's powerful story of perseverance and resilience is just the gift that keeps on giving. That, and her tremendous talent. Some people are just that amazing.

1. Her Perseverance Through Tragedy

At an early age, Nyong'o was exposed to quite a bit. Her father was an opposition politician under a repressive regime in the country, so he was in and out of jail. The family had to destroy many of his documents. And sometimes, Nyong'o wasn't even allowed to go to school. She said, "I was definitely exposed to some extreme situations." But she said the experience made her resilient. She said, "Tragedy is something that I have known and that I have tried to accept as part of life. But I don’t dwell on it."

2. Her Mentor Status To Arts-Focused Kids

When Nyong'o returned to her country, she served as a mentor to kids aged ten to eighteen who were interested in pursuing careers in the arts. She said, "When I was that age I would have liked someone to talk to me. Because what I found when I was growing up was that there was no real understanding of what it meant to be in a creative field."

3. Her Response To Being Told She Was "Too Dark"

When she was first auditioning for roles in Nairobi, she was told that her skin was "too dark" for her to be on television. But she was not put off by the racist remark. She was determined to prove them wrong. "It didn’t ring true. I just thought, I need to find another way," she said.

4. When She Called Out Racism In School

Nyong'o told the magazine that she called out her school for sending her to the writing center to improve her writing skills when her papers were better than white students who had not been sent in. "I realized that my skin color was making some people see me differently," she said.

5. Her Bold Approach To Controversial Roles

While some actresses might shy away from tough characters, Nyong'o is not one of them. She's not afraid to work her acting muscles. In fact, she told the mag that she seeks out roles that will rile people up: "I’m definitely attracted to more dramatic roles. I like playing characters that stretch me and that allow me to investigate humanity in a different way."

6. Her Perspective On Having Kids

Nyong'o, like many women out there, is feeling a bit of pressure to procreate before she's ready. She mentions her mother would like her to have kids ASAP, and raise them in Kenya. "But I think that will all be determined when I have that moment. When I have that man," she said. She is kind of busy with a killer career right now, after all.

7. Her Dedication To Her Home Country

Though Nyong'o has conceded that she feels at home in the US, she said that she truly began to appreciate Kenya after she left. "Ultimately, I will always be a child of Kenya," she said.

Of course, none of this is surprising. There's a reason we all love this woman.