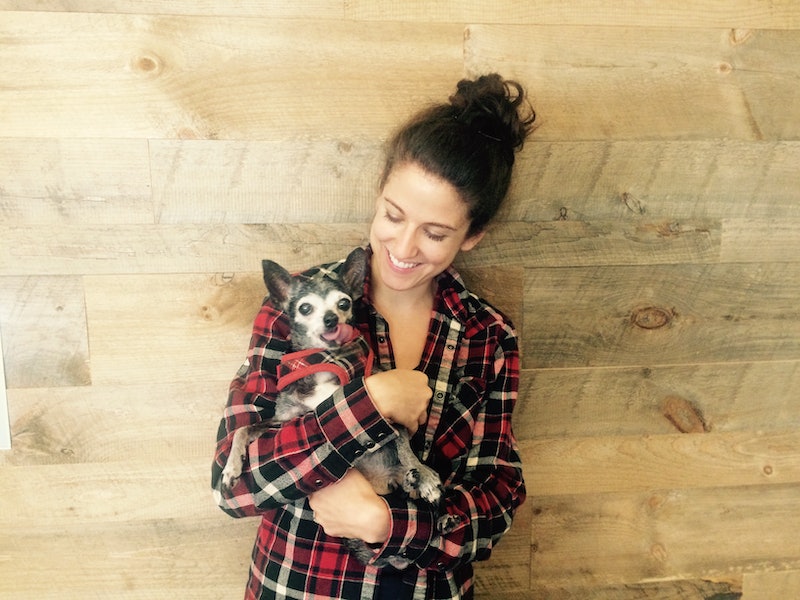 I stopped eating meat seven months ago — the night I met my boyfriend, Jesse. He asked me if I was vegetarian, and I gave the same answer I always had: "No, but I mostly eat that way." When he asked me why I still ate meat, I didn't have a good reason; I never had been able to think of one. Though he didn't try to argue with me, it was clear that it mattered to him that anyone he was seriously involved with would at least consider the morality of eating animals.

We fell in love quickly, and I was soon coming home every night to Jesse's delicious vegetarian cooking. To my mild surprise, making the switch to not eating meat was a seamless, almost incidental transition — a relief, even. Growing up, I'd never liked eating animals or eggs, but I had trained myself to be able to eat them because I didn't like seeming picky. I didn't realize until I stopped eating meat what a relief it would be to finally have a good reason to refuse the dishes that had always, on some level, made me feel icky.

What surprised me very much, however, was the fact that six months in, I would decide to stop consuming animal products altogether.

The reason? A very disturbing documentary I watched, called Earthlings . The film, released in 2005 and narrated by Joaquin Phoenix, is simple in format. It shows footage not just of how each kind of animal is killed, but also how milk, cheese, leather, and other animal-based products are made. As Ellen DeGeneres put it, "Food Inc. is a Disney movie compared to Earthlings." I spent the entire film wanting to cover my eyes, but I forced myself not to.

By the time it was over, I felt that I had to try to stop eating meat and dairy. There was one fact about dairy production that upset me irreparably: Baby calves are taken from their mothers, then killed or raised for meat, while the mother cows (yes, even organic ones) are kept pregnant or nursing for the entire duration of their lives, only to die at an average age of four, as opposed to their potential lifespan of 25. It was all like some post-apocalyptic Margaret Atwood novel. Suddenly, the cream I'd always needed in my coffee wasn't so appetizing.

The decision to end my consumption of animal products was swift and impulsive, like most of my decisions. Since then, however, there are several more gradual changes that have surprised me. Here are five of them.

1. I Realized That Living Ethically Is The Best Kind Of Slippery Slope

The biggest change for me came when I watched Earthlings and saw the images of mothers having their babies taken away so they could be continuously milked — enslaved and made pregnant their entire lives, only to have each and every child taken from them — just so that I could drink cream in my coffee. No less traumatic were the images of animals being skinned, sometimes while still alive, so that I could wear that skin.

Once I had those images in my head, I realized that there was no way that I could choose to consume some animal products and not others without feeling like a total hypocrite. If I was going to live in accordance with my desire not to cause needless harm to others, I would have to stop wearing leather and consuming dairy. I knew this would be much harder than not eating meat, but suddenly, I didn't feel like I had any other choice.

While it has been more difficult to stop eating dairy (though not nearly as hard as I expected, which I'll get to in a minute), after I made those changes, I found myself more willing to make others I'd been putting off as well. I found a very handy ethical clothing brand guide, and am trying to make an effort not to buy clothes or goods made in sweatshops. I find myself more motivated to go to the farmers market and buy vegetables grown locally.

These are small changes I've been meaning to make for years. The interesting thing is that once you make one change, it actually becomes much easier to see where you can make more. Living ethically is the best kind of slippery slope, and I hope to keep sliding.

2. I Finally Had A Good Excuse To Give My Wardrobe A Makeover

Once I made the connection that all of my favorite shoes and jackets were made out of the skin of animals, many of whom are killed expressly just for their skin, they stopped looking as cute to me. And I say this as someone who really, really loved leather. Like, a lot.

It was hard to get rid of my leather. I have such an emotional attachment to one leather jacket in particular that I know I may have to keep it forever, even if I don't ever plan on wearing it again.

That said, realizing that all of my fall wardrobe was basically made up of a pile of skinned animals proved to have a silver lining. I finally have a real excuse to update my wardrobe — something I've been trying, and mostly failing, to do for years. Because it's harder to find vegan boots, I've also had to give myself permission to buy nicer new shoes online. I love my new vegetarian Docs and Vaute coat, and I know if I hadn't committed to not wearing animals, I would have continued sporting my old, beaten-up leather boots that I should have replaced years ago.

Another bonus? Most vegan clothing is made much more ethically — and is better quality — than the average stuff you buy in stores. I find I'm slowly refilling my wardrobe with fewer, nicer things, just like I've always wanted, but never gave myself permission to do.

3. I Realized That It's Easier To Change My Habits When The Motivation Is Love

I've been told before by doctors that I have a milk allergy, but I was never able to motivate myself to enjoy my coffee black. I was dreading soy creamer, and while it's true that it isn't quite as tasty to me yet, I've been amazed by how quickly my taste buds and I can adjust, given the right reasons.

When you believe that wine is more expensive, it's proven to taste better. Similarly, when you believe you're drinking black coffee because it is the right thing to do, the act of drinking it becomes more pleasurable.

It's much easier to change your habits when your motivation is not based in denying yourself something because you're afraid of its effects on you. Often, we say that we "should" exercise more or "need to" eat fewer sweets because we're afraid of being fat or unhealthy. All too often, that motivation is based in fear, and sometimes even self-hatred. It's not surprising that a change is actually much easier to make when it's based instead in compassion and love.

Perhaps I will try extending the same logic to the other frequent "shoulds" in my life; motivating myself to exercise because I know it will make me kinder to my partner, or writing more because I know it will make me a better editor to the writers who are depending on my notes. In being kind to others, we end up being better equipped to extend that same kindness to ourselves.

4. I Became Even Closer To My Partner

Though we never had a conversation about what he would do, when I told Jesse I wanted to stop consuming animal products, he immediately joined me in solidarity. When I mourned getting rid of my shoes, he let go of the leather boots he's worn for a decade.

He stopped buying (even humane certified) eggs and parmesan cheese, though I know he loves both. When I go out to eat and have to ask annoying questions about the menu, he asks them with me. I'm not surprised — he was the one who asked me about vegetarianism on the first date, after all — but I do feel our bond is even stronger now. Becoming a vegetarian was mostly easy for both of us; it's in passing up cheese pizza that I find I need his moral support. Literally.

5. I Just Feel Better About The Way I'm Moving Through The World

Yes, the self-righteousness vegetarians and vegans get a rep for may be real. But mostly, for me, it just feels good to be acting in line with my values. I don't want to participate in any system that enslaves others and causes suffering— and it feels pretty empowering to realize that, at least in this one sector of our complicated economy, I don't have to.

I like feeling like less of a hypocrite, less powerless. I like that I feel more connected to animals, especially female animals. When I crave something with dairy, I think about how I would feel if women were all enslaved, put on fertility drugs for their entire lives, forced to churn out babies and then had every single one of those babies taken away. Stress that kills them at the human equivalent of about 16. As a woman, the decision is clear, and it's been exciting to realize that my feminism can extend to animals. Interestingly, I also find I have more compassion for my fellow human animals and their suffering.

So much in life is ambiguous — but this isn't. Every day now, I'm boycotting the belief that we own the planet and are free to enslave and destroy others for our mere pleasure. Will it stop the industry or solve global warming? No, I'm not delusional. But if we all had a similar change of heart, it would make a huge difference.

More like this
10 Pumpkin Recipes That Are Way More Creative Than Pie & Lattes
By Rebecca Deczynski and Alexis Morillo
This Psychological Effect Might Be Keeping You From Hitting Your Goals
By Lexi Inks
The 19 Best Tweets & Memes About Bisexual Awareness Week
By Lexi Inks
On TikTok, Tinned Fish Date Night Is The Latest Viral Food Obsession
By Emma Carey
Get Even More From Bustle — Sign Up For The Newsletter