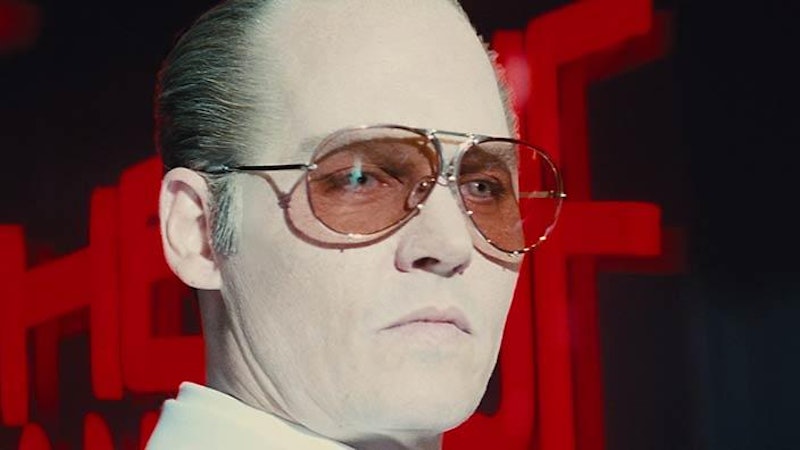 In the new film Black Mass, Johnny Depp portrays notorious real life Boston gangster James "Whitey" Bulger. The role is one of Depp's most unrecognizable — and that's saying something — and it is already earning the actor heaps of praise. The film tells the story of Bulger's rise through the ranks of the Irish mob in South Boston in the '70s and '80s, as he leverages his role as an FBI informant and his relationship with his Massachusetts State Senator brother to increase his power and eliminate his enemies. But one aspect of Bulger's life the movie does not delve into is how he ended up with his infamous moniker. Why is Whitey Bulger called Whitey?

It's not just because of his skin color, which had been my assumption (though if that were the case, a lot of people in New England could have the nickname Whitey). Bulger got the nickname Whitey when he was a kid because he had white-blond hair. He apparently despised the name, and much preferred to be called by his actual name of Jimmy or Jim, or even by an alternative nickname, Boots, which was inspired by his habit of pulling a knife out of his cowboy boots (you can't make this stuff up). In addition to his odd nicknames, there's a lot about Whitey Bulger that you probably don't know. Like these eight facts, for instance.

He Had His Victims' Teeth Removed

In several of the murders committed by Bulger over the years (he was officially charged with 19), he instructed his underlings to remove the victim's teeth from their bodies after killing them. This way, they would not be identifiable via dental records.

He Ran Away To Join The Circus

When he was 10 years old, Bulger ran away from home and briefly joined the Barnum and Bailey Circus. If only he had stayed with the clowns and the elephants, he might have lived a normal life...

He Won The Lottery

When you wield the kind of influence Bulger did at the height of his power, you can pretty much get whatever you want. When a man named Mike Linskey purchased a $14 million winning lottery ticket from a liquor store owned by Bulger, Bulger "convinced" him to tell lottery officials that he and Bulger actually purchased the ticket together — entitling Bulger to half of the winnings.

He Had A Soft Spot For Animals

Even a man as vicious as Whitey Bulger apparently had a gentle side. Bulger reportedly cried when he witnessed the mercy killing of a dying puppy while on the lam in Louisiana. I'm guessing he's not a huge fan of Marly and Me.

He's Been Portrayed On-Screen Before

Sort of, anyway. Bulger's life as the head of the Irish mob in Boston and his role as an FBI informant were the inspiration for Jack Nicholson's role of Frank Costello in Martin Scorcese's Oscar-winning film, The Departed. Bulger was still on the run when the movie premiered in 2006; he wasn't arrested until 2011.

He Broke An FBI Record

In 2008, the Bureau doubled the reward offered for Bulger's capture to $2 million; at the time a record for a criminal in the United States. Gives a new meaning to the term "criminal record," right?

His First Arrest Was At 14

Bulger began his life of crime younger than most. He joined a street gang known as The Shamrocks and didn't steer clear of the law for long. He was arrested for larceny when he was just 14.

He Was In The Military

Bulger served in the U.S. Air Force from 1948-1952. During his tenure he spent time in the stockade for multiple assaults, and was also arrested for going AWOL. Despite these infractions, he received an honorable discharge.

Whitey Bulger's notorious lifestyle is portrayed in Black Mass, but the film definitely doesn't showcase him joining the circus or crying over puppies. Bulger is a pretty interesting, albeit dangerous, guy, so it's no wonder Johnny Depp was so keen on portraying him.

Editor's Note: A previous version of this article erroneously stated that Mike Barnicle won the lottery with Whitey Bulger, when in fact, it was Mike Linskey.