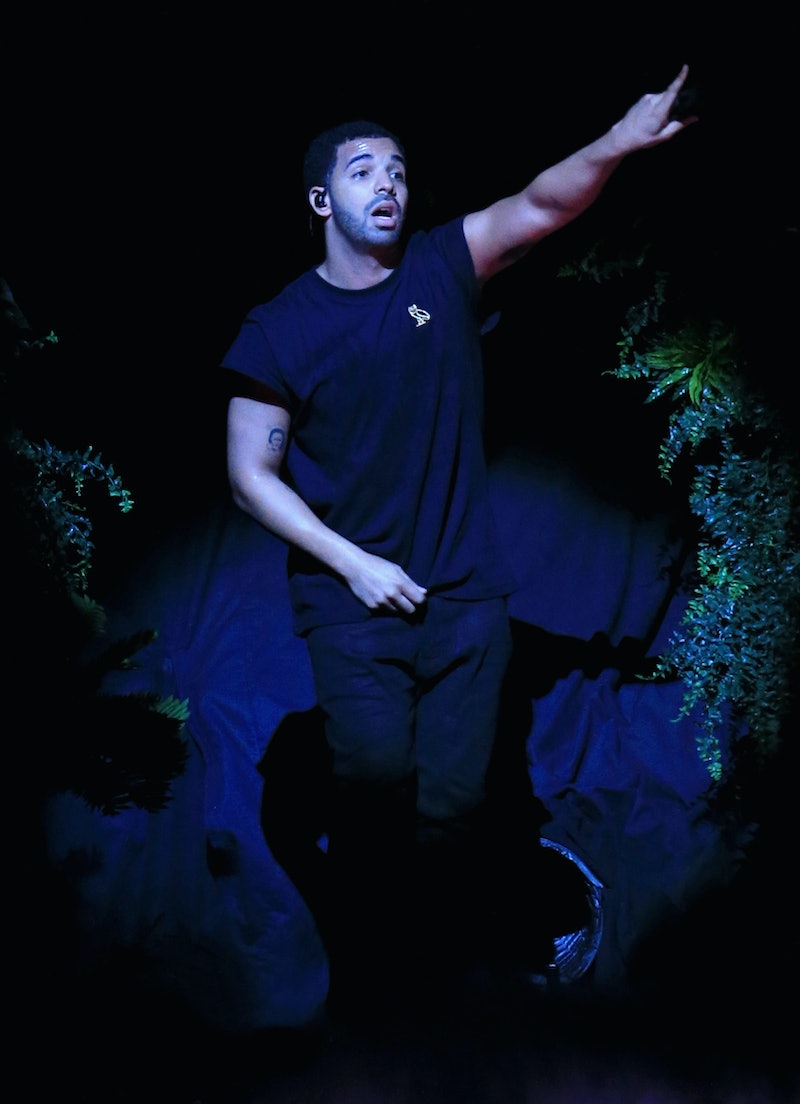 The Internet is a fickle, fickle place. Just days after Twitter blamed Drake for Serena Williams' surprising loss at the U.S. Open, fans on the social media platform are now losing their minds with excitement over a photo of Drake and Lorde together at New York Fashion Week. Of course, the picture alone would be enough to spark a conversation — the Canadian rapper and Aussie singer-songwriter are both insanely talented at their craft but occupy entirely different genres of music — but it's the fact that Drizzy referred to the Aussie singer-songwriter as his "wifey" that really has the people talking. And why wouldn't it? Because, like, not only did Drake call Lorde his "wifey," (and accompany the photo with multiple engagement ring emoticons) but she totally reciprocated the love and shared the photo herself with a heart-eye emoji. What is going on?!

Of course, the most obvious answer to this is that Lorde is his legal wife and that they are married, or engaged, or even dating, let's be real here. But considering that Drake is most likely with Williams and Lorde has been in a relationship with her hometown boyfriend James Lowe for years, I'm gonna go ahead and assume Drake was using the phrase "wifey" as a term of endearment and not a legally binding agreement. And the fans — oh, the fans — they know what's up. Because everyone on Twitter who has seen this picture has a feeling that this means a Drake & Lorde collaboration is coming. GIVE IT TO US.

First of all, let's talk about the fact that just a few weeks ago, Lorde expressed in way more than 140 characters how she felt about Drake as a rapper and songwriter, taking to Twitter to gush over his ~hook nouns~ and specifically his track "Hotline Bling":

So once Drake Instagrammed this gem of a photo of the two hanging out (and being all ~faux married~ and stuff), it didn't take long for fans to be thirsty AF for that collab (and understandably so):

TBH, a Drake/Lorde collaboration would be off-the-charts (but like, also on the charts because it would be that sick and successful). Combining Drake's "I-once-played-Jimmy-Brooks-on-Degrassi-but-I've-secretly-been-an-insanely-talented-rapper-all-along" rhymes with Lorde's dark, moody melodies and distinct voice would be super easy on the ears, I'll tell you that much. And I can already imagine songs like "Tennis Court" and "Glory and Gore" getting a Drake remix, but I'm getting way too ahead of myself here since if they do collaborate, it'll probably be on something new. MAKE IT HAPPEN, GUYS.