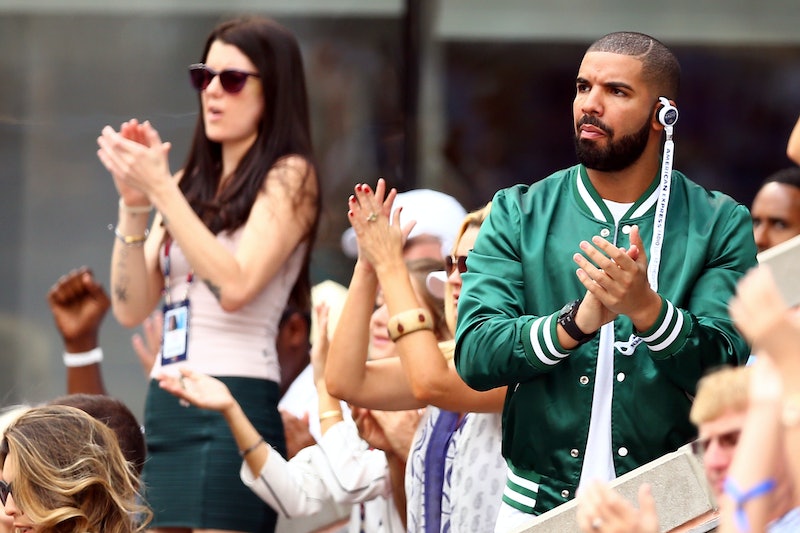 There was a major upset in the sports world on Friday when Serena Williams lost her chance at a Grand Slam when she lost to Roberta Vinci during the U.S. Open. It was a shocking loss for Williams, who beat her older sister Venus Williams earlier this week. But perhaps even more shocking — or maybe not shocking at all, knowing how the Internet reacts to these types of things — Twitter is going full-on cray, blaming Drake for Williams' loss. Yes, Drake — the wheelchair-bound Jimmy Brooks, the If You're Reading This It's Too Late rapper, and the rumored boyfriend of Williams — is facing the brunt of the tennis player's loss.

Considering the fact that the rapper had already attended numerous matches that Williams actually won, maybe he's not such a bad luck charm. But considering he did attend other sporting events where his team of choice lost, maybe there is some truth to that (kidding). Either way, this loss is "the biggest upset of Serena Williams' career" (or so Business Insider claims; I'm gonna go ahead and assume that they know much more about sports than I do) and Twitter is not having it. Check out some of the most outrageous #BlameDrake tweets below:

1. When They Turned His Haircut Into A Straight-Up Tennis Ball

2. When They Got Real About This Double Standard

3. When They Got All Science-y On Us

4. When They Wanted To Turn Him Into A Car Service For Haterz

5. When They Realized Serena's Loss (And Their Hate) Only Fueled Drake's Career

6. When They Used His Own Lyrics Against Him

7. When They Blamed Him For Other Things

8. When They Blamed Serena (For Dating Drake)

9. When They Commented On His Other "Losses"

10. When They Brought Common, Serena Williams' Ex, Into The Discussion

11. And When They Just Wanted To Tell Him It Will All Be OK

If you're reading this, Drake, it's too late.