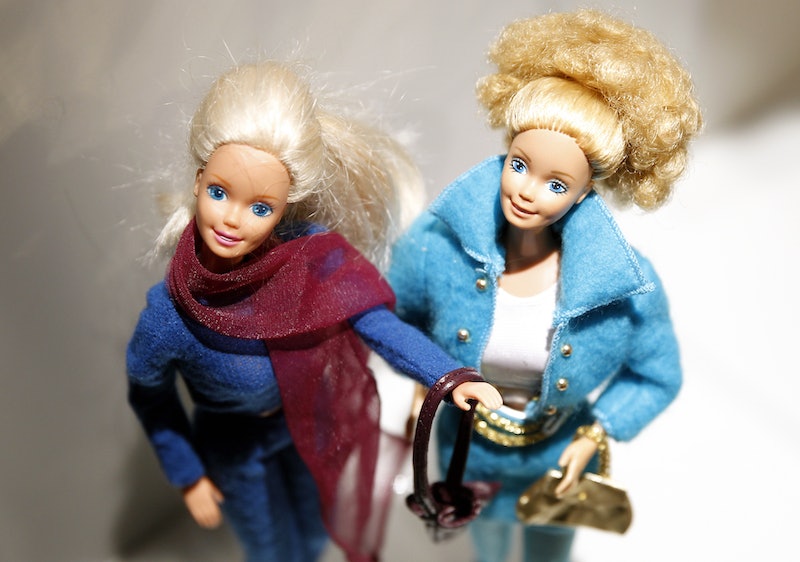 Poor Barbie has had a rough time over the last few years. She's been called sexist, consumerist, and with the advent of the new Hello Barbie, straight-up creepy. (I guess she can cry herself to sleep on the piles of money she's earned for Mattel over the decades.) As valid as the other accusations seem, though, it's difficult to imagine Barbie ever being a sinister figure. Sexist? Maybe. Subject to patriarchal standards of beauty? Definitely. But "creepy?" What gives?

On the surface, Hello Barbie is a run of the mill modern Barbie. Blonde, skinny, and clad in the T-shirt and jeans uniform of our generation, she's everything you'd expect from the newest incarnation of the iconic figure. Those jeans, however, contain technology that would have seemed impossible a few decades ago. Hello Barbie, you see, is capable of voice-recognition software. As Mashable put it, she's "Siri trapped in a doll's body."

Unlike your iPhone, however, Barbie isn't limited to relaying the results of web-based searches. She can hold a real, back-and-forth conversation with her user, discussing anything from jokes to career goals to the weather. Here's where people start getting creeped out: Hello Barbie stores information as you talk to her, giving her the ability to "learn" more about you over time.

How the heck does she manage that? Mashable got to play with Hello Barbie earlier this week, and like most technology, there's plenty more going on than what you see in front of you. Here's everything you need to know about Hello Barbie.

Unsurprisingly, it takes a lot of technology for a plastic doll to have an actual conversation. According to Today, the WiFi-connected Hello Barbie is equipped with a software called ToyTalk that picks out key phrases in a child's conversation, which in turn informs Barbie's response.

Hello Barbie comes with her own charging station, where magnets on her feet allow her to stand up as she charges.

3. She Learns in Real Time

Because Barbie is connected to an information cloud, her conversation topics are constantly being updated. This means she'll be talk about things as they happen, from Joe Jonas's new band to whatever crazy stuff goes on at the VMAs next year. (Well, maybe not the latter.)

When Mattel first unveiled Hello Barbie, advocacy groups immediately attacked the doll for its capacity to "eavesdrop" on children. Although efforts to keep Hello Barbie off the shelves failed, their "Eavesdropping Barbie" nickname stuck around.

5. Parents Can Control the Conversation

Mattel swiftly pointed out that Hello Barbie is programmed never to ask children personal details, and parents can actually control topics of conversation by adjusting the doll's settings. However, that's not enough for some parents.

"Children confide in their dolls. When children have conversations with dolls and stuffed animals, they're playing, and they reveal a lot about themselves," Susan Linn said in a statement to the Washington Post.

6. Dressing Up Is Limited

As much as parents worry about privacy, children don't particularly care. The important part is how fun Hello Barbie will turn out to be, obviously. Unfortunately, kids who like to play dress up with their dolls will be disappointed: Barbie's belt, which contains the on/off button, can't be taken off. Still, a true fashionista will be able to work around such limitations.

Hello Barbie is set to hit the shelves this November — just in time for holiday shopping, of course.