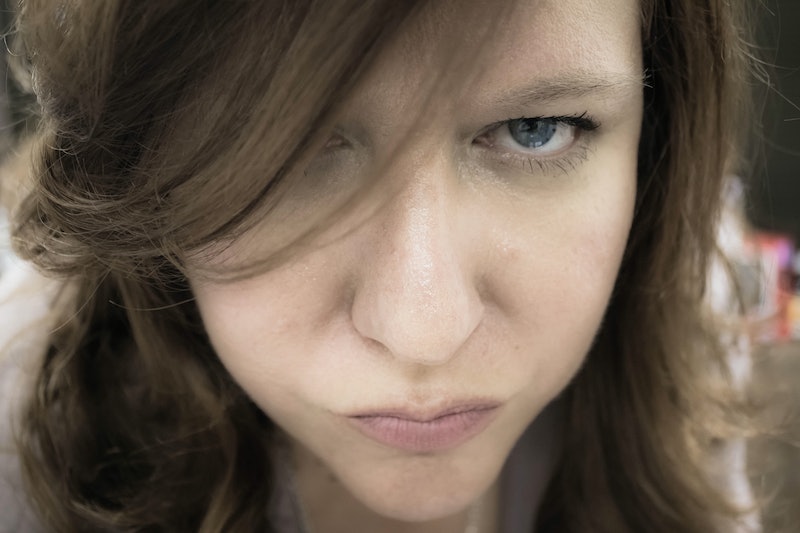 We all know people who seem a little too into themselves. Maybe they wildly overestimate their own abilities, or don't have a lot of sympathy for other people — maybe their favorite topic of conversation is themselves. All of these characteristics are symptoms of narcissism, a serious personality disorder that is usually diagnosed using a 40-question narcissistic personality inventory survey. But apparently knowing how to tell if someone is a narcissist is much easier than all that — you just need to ask them one simple question.

That's right, according to a new video put out by New York Magazine's The Science of Us, it only really takes one question to figure out if someone is truly a narcissist, and that's to ask them upfront: "To what extent do you agree or disagree with this statement: I am a narcissist." Apparently, narcissists have no qualms about identifying as such.

As The Science of Us explains, narcissists are defined by three traits: an unrealistic sense of their own superiority, entitlement, and a lack of empathy for other people. You probably know a few people who are medically narcissists without even being aware of it: apparently, it affects up to 6.2 percent of the population, and I'd imagine about 95 percent of politicians (hi, I'm a professional comedian) (yes, I just linked to my own website on an article about narcissism).

Lots of people, meanwhile, have narcissistic traits some of the time — we can all be selfish, because it helps us survive, and of course a little bit of self-love and confidence is healthy. The problem comes when you can't turn it off — when you're incapable of humility, when you're prone to narcissistic rage when your ego is wounded, when you aren't able to grow or change because you think you're already amazing and are entitled to all the successes other, more humble people are actually working toward. That's when narcissism crosses the line into narcissistic personality disorder, which can put your job, relationships, and safety at risk.

This video by New York Magazine's The Science of Us gives you the goods on how to suss those people out, to try at your next cocktail party or work luncheon:

Truth be told, though, I kind of wonder if there is any graceful way to ask someone that question without seeming rude. If you think you can pull it off gracefully, you honestly might have the extreme charisma and confidence of someone who is actually a narcissist — so maybe the test goes both ways!

Wondering if you're a narcissist? Apart from asking yourself and really trying to be honest about it, you can take the longer 40-question survey on narcissism here. I scored a 16, which in reality might be too low for someone who has honestly spent an hour plucking her eyebrows.