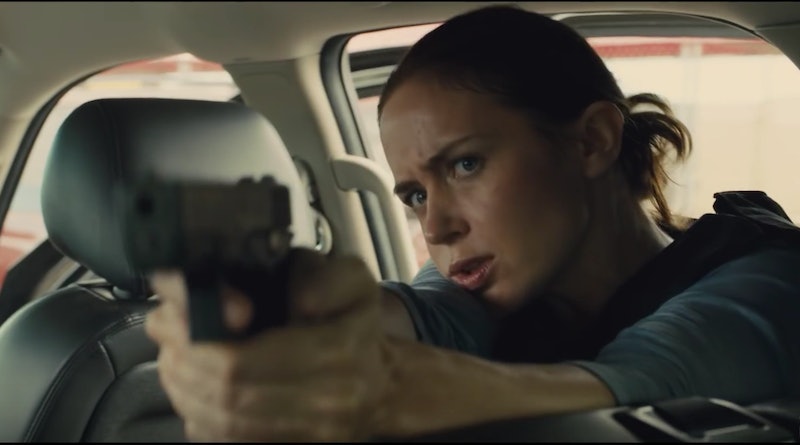 If Sicario is based on a true story, it certainly paints a bleak picture of the world. Sicario tells the story of FBI agent Kate Macer (Emily Blunt), a by-the-books agent of the law who is recruited to a special task force at the beginning of the film. The task force, a DEA/CIA/FBI mix, is run by consultant Matt (Josh Brolin) and their South American liaison /fixer Alejandro (Benicio Del Toro), with the goal of taking down Mexican drug cartels. But, is the task force in Sicario real? You'd hope not, as in the film, things escalate quickly as Macer learns that Alejandro and Matt don't intend to follow the law to get their targets. The questionable motives of the traditional "good guys" helped make Sicario a hit when it premiered at the Cannes Film Festival, and, no doubt, will help make it a hit with viewers when it gets a limited release on Sept. 18.

Sicario was written by actor Taylor Sheridan of Sons of Anarchy fame, and there is no other writer credited, meaning it was not adapted from any book or article. Sicario is not based on a true story, and even if a secretive DEA/CIA/FBI task force was causing violence along the U.S.—Mexico border, it's unlikely we'd know about it. So it's possible that the task force itself may not be real, but Sheridan did say he was inspired to write Sicario by the current state of the drug war.

"I wanted to explore the modern American frontier and what it looks like. A lot of people call it a cartel movie. But the cartels of course are just a progression of demand. If you remove them all tomorrow, identical entities would pop up in their place," Sheridan told the LA Times.

In that same interview, director Denis Villeneuve added that the film is about a very real problem, saying, "This is a problem that directly involves North America because we are clients of those people. I don't know if it's guilt or the fact that the level of violence is so high, but something about the situation makes us not want to think or talk about it."

Despite the very real circumstances that inspired Sicario, Villeneuve was adamant that the cycle of violence depicted in Sicario is not unique to the U.S.—Mexico border.

Sicario may not tell a true story, but the fact that audiences might wonder if it is should probably give us all pause. A world in which corruption, murder and escalating violence is expected is more terrifying than anything a filmmaker could dream up.