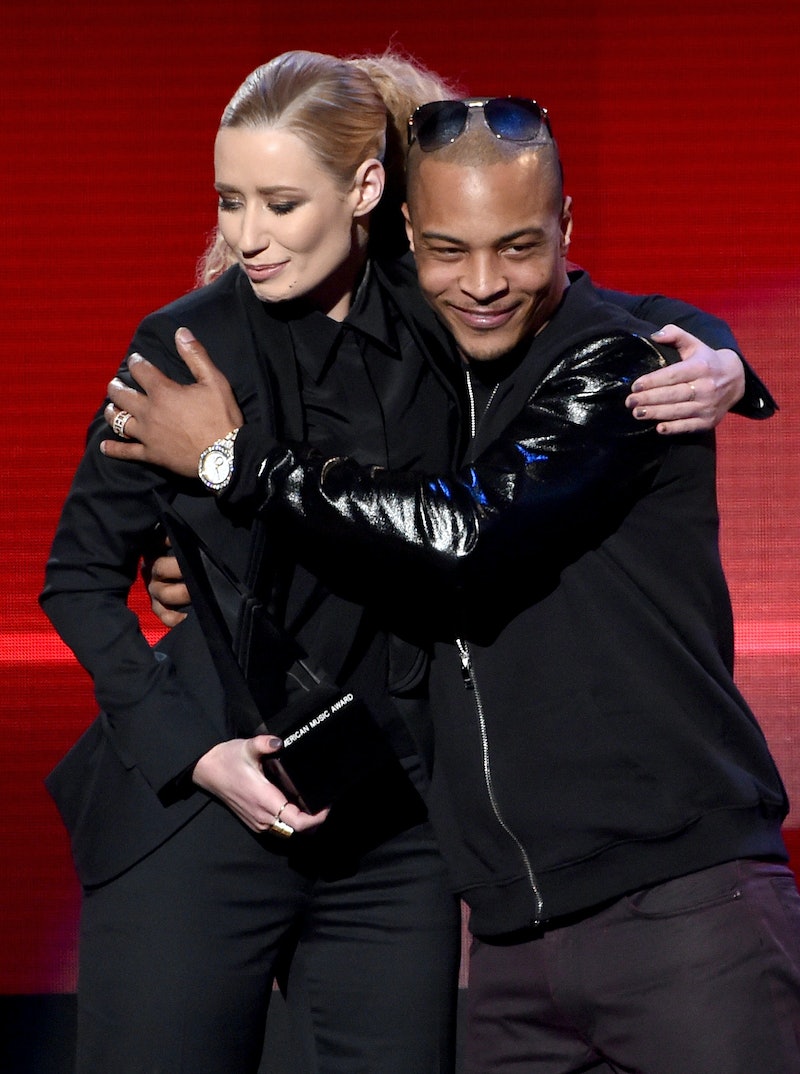 T.I. might feel responsible for bringing Iggy Azalea into the world, but he doesn't want to have anything to do with the Australian rapper anymore. In an interview with Ebro In The Morning on New York's Hot 97 on Thursday, T.I. said that he severed professional ties with Iggy earlier this year. Why? Partially because of the feud that she got into with Azealia Banks last December. But it was Azalea's response to Q-Tip that really made T.I. realize this was a bridge he had to burn. At the time of the feud, T.I. publicly defended Azalea, but it sounds like he regretted it. The rapper cutting things off with Azalea sends an important message about the consequences of her inappropriate cultural appropriation — and it could be the real beginning of the end for Azalea's career, if even her former boss and mentor is heading for the hills.

In the interview, when discussing the 25-year-old rapper whose American career he helped launch by signing her to Grand Hustle Records, T.I. said that their relationship "took a bit of a rest stop" and that the two hadn't spoken recently. He realized it was time to go after the explosive feud that Azalea got into with Azalea Banks in December when Banks called out the white Australian rapper for her repeated offenses of misappropriating black culture and her misunderstanding of racism, especially in the music industry. But her words fell on deaf ears. Several other voices got involved, including Q-Tip, who spent a lot of time on Twitter educating Azalea in a series of almost 40 tweets on a complex history of hip-hop, but Azalea frustratingly dismissed him, too. T.I. said of the incident:

After the Q-Tip thing. After I kind of smoothed it over … (she) came back and undid (that) … I’m a loyal partner. If I rock with you, I’m gon’ rock with you. If you’re right, wrong — we’ll discuss that in the car — we gon’ get out of here right now though. That’s just how I am, so right now, I’m gon’ block the bullets, OK? Now go! When I say, "Go!" just go! Don’t stand around and talk while I’m blocking bullets! You slowing me down.

Could her mentor who once helped launch her to fame abandoning her mean that Azalea is finally trying to understand her past ills? Apparently, not. She's been tweeting that she's oblivious to the fact that there's any problem at all:

The lack of self-awareness in her response so far is not a good look, and pretty hypocritical at that. Some have already wondered if her career is over. It certainly seems like it's coming to an end, after she canceled her entire Great Escape tour in June of this year, and later also canceled an appearance at a gay pride event in Pittsburgh after she faced backlash for allegedly posting offensive, homophobic comments on Twitter in the past.

Even if she doesn't see that she's finally facing the consequences for her repeated offenses and dismissal of those trying to help her out, it seems pretty clear to me that no one is going to tolerate her making a career through appropriation and misunderstanding black culture, not even someone who once signed her to his own label.

T.I. wasn't totally unsympathetic, though. He said in the same interview he felt that the pressure of fame probably had something to do with the way that Azalea reacted. "It's very difficult to be the new kid and to be the butt of the jokes … And it came at a time where culturally, in this nation — which, she's not from here — we were looking for a source, for somewhere to place some pent-up aggression," he said. Nevertheless, despite his kindness and patience, T.I. does seem to want us to know that nope, he doesn't want to be associated with her professionally anymore. Who else is going to jump the Iggy ship? And will she and other white artists learn from T.I.'s dismissal that cultural appropriation will only go tolerated for so long?

More like this
Beyoncé Just Announced Tour Dates: Here's How To Cuff Tickets To Her 2023 Shows
By Jake Viswanath
Cardi B, Olivia Rodrigo & More Will Present At The 2023 Grammys
By Jake Viswanath
Lizzo Scares Herself Meeting Her Madame Tussauds Wax Figures In A TikTok Video
By Alyssa Lapid
Will Beyoncé Perform At Or Attend The 2023 Grammys?
By Jake Viswanath
Get Even More From Bustle — Sign Up For The Newsletter
From hair trends to relationship advice, our daily newsletter has everything you need to sound like a person who’s on TikTok, even if you aren’t.