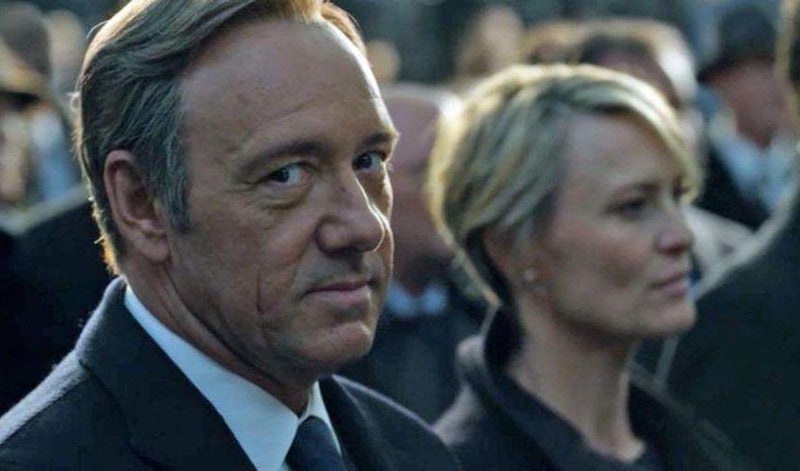 I've loved House of Cards ever since I binge watched the first season in 24 hours ahead of the release of Season 2. It's hard to pinpoint what's so great about it, especially given that I'm not much of a fan of political dramas, generally speaking, but I'm downright obsessed with this show. Is it Kevin Spacey's dreamy southern drawl that only vaguely disguises Frank Underwood's ruthlessness? Robin Wright's absolute badass-ness? The fact that it shows how no holds barred the world of politics can be? I'm not sure, but what I'm trying to say is that I need the next season in my life NOW. The question is, when will House of Cards Season 4 premiere and what can we expect when it does?

The good news is that there actually is a Season 4. That's not news, but it's definitely an accomplishment in a world where too many series come and go way before their time. The bad news is that there's been some speculation that the release date might be pushed back if the pattern of years past is anything to go by. Netflix Life notes that Season 1 was released on February 1, 2013, Season 2 came out on February 14, 2014, and Season 3 hit Netflix on February 27, 2015. If Season 4 follows suit, we're looking at an early March 2016 release date, and frankly, that's just too long to wait.

Don't get too discouraged yet — nothing's been set in stone, and we could get a treat and Season 4 might be released extra early. Until we know for sure, let's speculate on what could happen when House of Cards returns, shall we?

Claire hasn't been satisfied playing second fiddle to Frank for a long time now, and it's unlikely she'll stop her quest for power and influence now that she's left him behind. If there's one prediction I'm most certain will come true, it's that she'll end up running for president, or, barring that, will join one of Frank's competitors' campaigns as a VP on the ticket (though that's less likely than her aiming for the highest office in the land herself).

Frank Tries To Have Claire Killed

I know Frank loved Claire (sorta?) as long as she was on his side, but he's not above getting rid of anyone who stands in his way, and I don't necessarily think that'll stop when it comes to Claire, either. If she attempts to destroy him and his chances at keeping the presidency, I hate to say how ugly how things will get between them, though she likely knows this and is too badass to care.

I mean, he's a terrible president, right? There's no way a guy like Frank Underwood can come out on top at the end of the day, so I wouldn't necessarily expect to see him reelected come 2016. Of course, I imagine part of that will depend on how long HoC's creators want the show to continue, but still...

Heather might have lost Iowa and gone without Doug's help with that journal that would prove Claire's abortion, but it's not time to count her out just yet. I don't necessarily know that she'd be a good president, but her election would certainly cause some strife for Frank and create some really interesting dynamics.

Doug Has A Complete Breakdown

I mean, he already has, right? He can't bear that Frank has pretty much turned his back on him and he's already kidnapped and killed Rachel and then buried her in the woods, so there isn't much further he can fall. However, it's likely he'll completely self-destruct in Season 4, and it's going to be amazing (and painful) to watch.