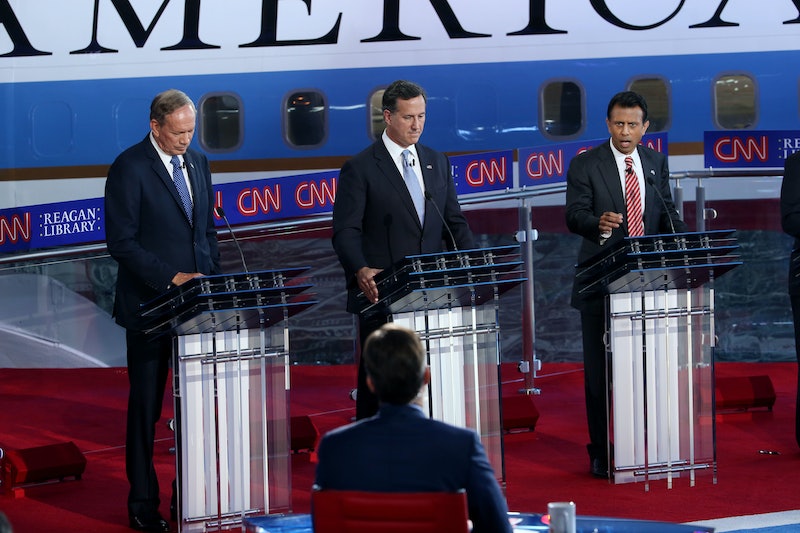 In the aftermath of the second Republican primary debate, all eyes are on the 16 candidates as America waits to see which GOP candidate will drop out next. Last week Rick Perry made the first move, officially retiring from the race and dropping the number of candidates from 17 to 16. It was a smart move — Perry's campaign was treading water, and it was obviously time. But although other candidates aren't in quite as bad condition, there are still several who might benefit from exiting early.

Most bets are on former Virginia Gov. Jim Gilmore, the man who literally has no support. He wasn't even polling at 1 percent ahead of the CNN Republican debate, and, humiliatingly for Gilmore, wasn't even invited to the so-called kiddie table debate. But Gilmore, despite having abysmal polling numbers, has practically no campaign to sustain. He's not operating on the high level of the other candidates, and as a result could probably stick around as long as he wanted to. Gilmore could probably just float along until the very end.

Other publications have highlighted Lindsey Graham, the spunky senator who wants Washington, D.C. to drink more, as the next most likely to go. But like Gilmore, Graham doesn't have much riding on him. And after his successful debate performance on Wednesday, he probably has some more traction in him.

Instead, the two most likely to drop out next are probably Rick Santorum and Bobby Jindal. Santorum may come as a surprise, considering that the candidate managed to pull from behind in 2012 and win the Iowa caucus. But his campaign is starting to mirror Perry's in terms of financial worry. His fundraising numbers are low, and throughout the summer, he lost several key staffers, including a campaign manager and his Iowa coordinator. One staffer even left Santorum's camp in favor of Perry's, which she is probably regretting now.

According to CNN's Political Prediction Market, Santorum is leading the bets on who will drop out first. Before the debate, he, Jindal, and Christie sat at a 30 percent likelihood, while Graham lead at 33 percent. Following the debate, Jindal, Santorum, and Graham are all tied for 54 percent for most likely to drop out.

But even if Santorum should drop out, the memory of his 2012 success might still keep him alive for awhile — unlike Jindal. During the happy hour debate, Jindal's performance failed to shine through. He's at the back of the pack — nationally, as well as in his home state of Louisiana. As governor, he currently has an extremely low approval rating.

The reality is that there isn't room for Jindal in the race. Of the governors, he's not the most experienced. His "outsider" angle has already been filled by Donald Trump, Ben Carson, and Carly Fiorina. And his appeal to evangelical Christian voters is eclipsed by Mike Huckabee. Unless he finds a niche for himself — and fast — Jindal's future doesn't look bright.