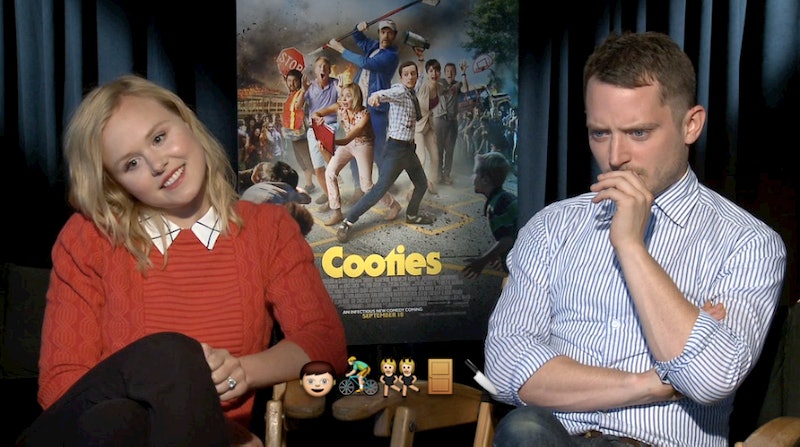 Elijah Woods loves horror films. The Lord of the Rings actor loves them so much, he even helps make them. With his co-founders, he created SpectreVision, a company dedicated to bringing high-minded horror flicks to the big screen. And the latest film to come out of the company's cannon isn't just scary, it's totally freaking hilarious. Cooties, a film as ridiculous as its title suggests, stars Elijah Wood, Alison Pill, Rainn Wilson, and Jack McBrayer as teachers trying to combat virus-infected children after a cafeteria food virus (which we see manifest in a disgusting opening scene) turns elementary students into zombie-like killers.

But instead of sitting down with the stars to talk about making the film, I pitched the actors the idea of playing a game instead. As you'll see in the clip, Wood was thrilled with the idea, McBrayer was hesitant, and Pill was completely terrified. Luckily, they all eventually agreed, and a fun (and pretty funny) emoji-based game ensued. I showed the stars cards with the titles of horror films written in emojis and asked them to translate. And they were pretty dang good at it. Wood was so good at it in fact, I had to kindly ask him to give his co-star and teammate in the game, Alison Pill, a chance at answering.

Watch Elijah and his Cooties co-stars attempt to play the game below.

See Cooties in theaters September 18. (And see if you can spot the Hobbit reference!)