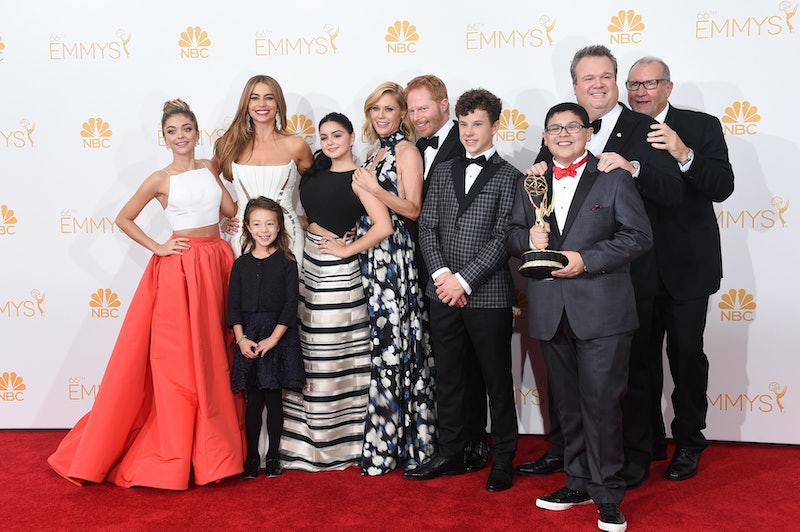 Here's a fun fact for you all: Modern Family has picked up the Emmy for Outstanding Comedy Series every year since its been on air. In what's been dubbed as the "New Golden Age of Television" — where there's been a huge influx of quality TV shows within the past couple decade — how does Modern Family keep winning Emmys? Now, don't get me wrong: I'm not saying by any means that the series is bad television. But, is it really the best sitcom that's out there right now? Or at least, good enough to monopolize the Emmys for five — possibly six — years in a row?

I have a hard time believing that Louie, Veep, Orange is the New Black, and Parks and Recreation (which are just some of the shows that have lost to Modern Family in recent years) haven't earned their time in the spotlight. Or, what about the comedies on TV that weren't even nominated — like Broad City, or It's Always Sunny in Philadelphia? You know, the shows that aren't afraid to take risks and change the game?

Plus, the Best Comedy category has become all too predictable. Why can't we change it up, Emmys? Some attribute it to the Television Academy's lack of wanting to think outside of the box, or the fear of the unfamiliar. But, whatever it is, it's time to give some of its competitors the credit they deserve.

Now let me just make this clear: Modern Family has done some positive things for television, and this isn't meant to discredit any of its triumphs. It's just that all the things Modern Family has been so celebrated for during the past five years are being done well by other shows too — and often times, those other shows are offering different perspectives, too. It's not so much that Modern Family doesn't deserve the Emmy, it's just that, you have to wonder why the Television Academy doesn't think these other shows deserve it too.

1. Portrayal Of The LGBTQ Community

Modern Family’s inclusion of a gay married couple has been culturally important and significant. However, it only sheds light on one small percentage of the LGBTQ community. Shows such as Transparent, however, are looking to expand the narrative of gender and sexuality more: In that show, Jeffrey Tambor plays a transgender woman with such a level of nuance that it’s both impossible to not be captivated and to not grow more understanding of the trans community.

2. Portrayal Of The “Unconventional” Family

The only really unconventional thing about Modern Family is that it's, actually, pretty conventional. And while that's part of why Modern Family's message is so strong, the Pfefferman family on the other hand — again from Transparent — is genuinely atypical, and incredibly refreshing to watch.

While the woman in Modern Family are light, fun characters that do have some complexity to them, none are pushing the boundaries quite like the female characters on Netflix's Unbreakable Kimmy Schmidt or HBO's Veep. The title sequence of the former series (produced by Tina Fey, mind you) boast proudly “Females are strong as hell.” And, in Veep, Julia Louis-Dreyfus plays a multifaceted president with almost too many layers to count. There's definitely room to spread the love (though it should be noted that JLD has a similar stronghold on the Best Actress, Comedy category.)

What people love most about Modern Family is its ability to tie everything up in a pretty little package with a moral and a hug by the end of every 30-minute episode. That’s fine and great — but what about giving some Emmy love to the kind of friendships and family-like connections the cast of Parks and Recreation formed over the years? That sort of heart is pretty groundbreaking, too.

Louis C.K.'s depiction of being a single dad on Louie is so spot on and significant. Like his stand up comedy, Louie speaks about being a dad with such candor and honesty you end up both laughing and crying. He's really not afraid to go there, and C.K. addresses issues many sitcoms wouldn't touch with a 20 foot pole.

Most of the diversity Modern Family brings to the table is Sofia Vergara's Colombian character, her family, and Mitch and Cam's Vietnamese daughter. Modern Family definitely makes Vergara's character, Gloria, more well-rounded than the typical "Trophy Wife," trope, which is great. But the Emmys could generally use more racial diversity among its nominees — what about ABC's Fresh Off the Boat (not nominated, but should have been)?

7. Portrayal Of The American Dream

The families in Modern Family seem to have it all: Nice houses, nice cars, and plenty of opportunities. But we should also reward shows that give us a glimpse into the process that gets you the nice houses and nice cars. Silicon Valley's entrepreneurship gets in the nitty gritty of what it means to truly work hard and build something out of nothing.

And again, Modern Family is good television, it's just that other shows out there are doing groundbreaking things, too — and I would love to see more of them celebrated for that this year.