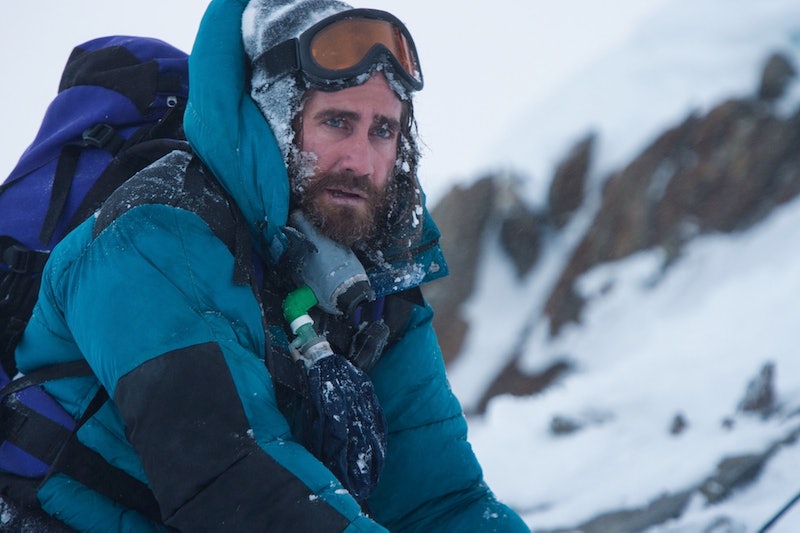 As a general rule, I despise 3D films. They are obnoxious, darkly tinted, and you have to hold your head at a precise angle to receive the full effect. There's no slacking off when watching a 3D film, and when particularly poorly made, these films warrant the use of a Tylenol or even worse, a barf bag. Roger Ebert said it best when he proclaimed, "3D is a waste of a perfectly good dimension. It is unsuitable for grown-up films of any seriousness." And I couldn't agree more, but with 2015's Everest , my preference for traditional, 2D films, is rebuffed. Everest , starring Jake Gyllenhaal, Josh Brolin, and a bevy of other A-listers, is simply stunning in 3D.

Directed by Baltasar Kormákur, Everest is based on a real life climbing expedition on Mt. Everest that was devastated by a severe snow storm in 1996. It's not a happily ever after story, but it is one that showcases exceptional human accomplishment, real raw emotion, and gorgeous views of the mountain and surrounding areas. Aerial shots of the Tibetan mountain range will drop audiences onto the highest peak in the world, without risking frostbite. “What we’re trying to do is mimic what these guys did and continue to do, which is legitimately risk their lives," one of the film's stars, Jake Gyllenhaal, says of the production. "We had, maybe, 25 percent at times when it was the harshest for us of what they experienced in reality.”

Director Kormákur acknowledged putting his actors through the harshest of conditions. He was forcing them to be method whether they wanted the chilling experience or not. "It was freezing, but I wanted to take the cast through it, have them get the real feeling so, even though we’ll have to shoot some in a studio or whatever, we can always draw from that experience and understand what it is to be out there in the elements," he says.

Brolin, who plays survivor Beck Weathers, didn't exactly know what he was getting himself into when he took the plunge and signed on. “In the beginning that sounds great conceptually, then there’s the reality of it. Then there’s the, ‘Now I’m freezing. Now I haven’t felt my feet for three days and I’m kind of done with this whole idea,'" the 47-year-old actor says. "Because the snow doesn’t look correct you’re throwing salt with 100 mile-an-hour fans, and we’re getting a nice exfoliation that day. You know, after awhile the romance of it is gone. You’re going, ‘OK, I am feeling an irritation and I hope it will look good on film.’ Because it’s there. For sure. It's for you."

Kormákur jumps in: "A happy actor is not a good actor," he says to Brolin.

Those who know the true story recognize that things don't end well for all the climbers who attempted Everest on May 10, 1996. So why even try? According to Brolin, it's "incredibly selfish" to do something as death-defying as climbing Everest. "I graduated high school and then I had kids. So I don't know what life is like without having a family. I made decisions that — I don't know if I regret — but I made decisions, like I started skydiving when I was 21, and then within a year I was doing it five to six times a day, so I have that thing," he says. "I think it's very selfish, and I think people climb for different reasons. It can run as deep or as cosmetic as you want. I do think it's a selfish act. I think our lives are a selfish act. But it's up to you how you want to live it."

Gyllenhaal had a particular challenge in playing climber Scott Fischer. From our first introduction, it's clear Fischer is an outlier in the pack. He's different. He's uniquely minded. But is he the film's villain? Not at all, according to the 34-year-old actor who plays him. "There are all these choices you make when you're trying to create a character. Obviously their backstory and where they're from, but also physically how they behave, how they look. What was interesting in particular with Scott Fischer is that I don't really look like Scott, but the essence of who Scott was was very important to capture. In other stories about this expedition, Scott had been made into the antagonist, really for the purpose of trying to create tension. What I discovered is that he was truly a free spirit and incredibly positive, loving person."

Everest hits theaters September 18. (And yes, the film will be shown in luxurious 3D IMAX.)