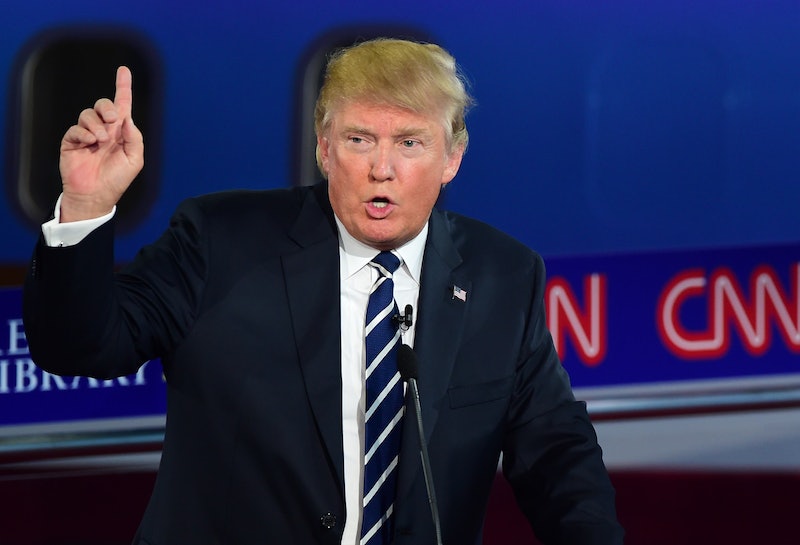 Donald Trump accused former Hewlett-Packard CEO Carly Fiorina of being one of the all-time worst CEOs during Wednesday night's Republican presidential debate (a title USA Today once gave Fiorina in 2005). Fiorina responded by saying that Trump has filed for bankruptcy "not once, not twice, [but] four times." Did Donald Trump really have four bankruptcies? And what does that say about his self-made persona as a trustworthy businessman in the 2016 elections?

Trump was quick to emphasize that he has never personally gone bankrupt, but Fiorina's claim that his casino companies have filed for bankruptcy four times is true. "Why should we trust you to manage the finances of this nation any differently than you manage the finances of your casinos?" Fiorina said to Trump during the debate. In response, Trump argued that "Atlantic City is a disaster" and that he always "knew when to get out" of the game before it was too late. Still, CNN notes that in the past 30 years, Trump's casino empire has filed for Chapter 11 bankruptcy more times than any other major companies in the country. And even though Trump didn't technically say anything factually incorrect about his investments during the debate, his bankruptcy filings aren't a great sign for the 45 percent of Republican voters who trust Trump with the economy more than they trust any other Republican presidential candidate.

One troubling aspect of Trump's statements during the debate, according to The Washington Post's Drew Harwell and Jacob Bogage, was when he suggested that "everybody else in my position" had filed for bankruptcy at some point. According to Harwell and Bogage, only about 5 percent of the country's largest companies have filed for bankruptcy in the past 20 years. So what, exactly, were the bankruptcy filings in question?

The Post notes that the Trump Taj Mahal in Atlantic City, New Jersey, created a $3 billion debt for the Trump firm, thanks to a high interest rate on its construction costs, combined with a "slump" in the U.S. economy. Trump apparently sold his airline and yacht to save the Trump Taj Mahal. While it's not clear just how much Trump sold his investments for, he joked at the time that a New York City beggar was "worth $900 million more" than he was at that point.

Just one year later, another one of Trump's casino investments ran into financial trouble — $550 million in debt, to be exact. The New York Times reports the Trump Plaza Hotel & Casino, also in Atlantic City, "was unable to meet its debt service payments." Lenders took control of the hotel, and while Trump remained the hotel's chief executive in name, he was no longer paid by the hotel or involved in its daily operations.

Trump's company, which controlled three of his casinos in Atlantic City, faced $1.8 billion in debt, which led to the company filing for bankruptcy in Camden, N.J., Bloomberg reports. Trump reduced his stake in the company from 47 percent to roughly 27 percent to lower its interest rates. Trump also apparently spent $72 million of his own to save the company, though he said at the time that he didn't consider the bankruptcy filing to be a "failure."

When Trump Entertainment Resorts Inc. went into debt, Trump stepped down as its chairman, just days before its bankruptcy filing. The company had apparently neglected to pay a bond interest payment for $53 million. When Trump left, his corporate stake in the company was around 10 percent, the Post notes — enough to continue bearing his name.

While Trump's statements during the debate were a bit misleading, and Fiorina knew it, he didn't say anything factually wrong about his casinos and his investments. Neither of them have perfect track records, but their financial discussion shouldn't influence voters' opinions of their qualifications to be U.S. president. A closer look into Trump's bankruptcies shows that he did whatever it took, even his own money, to save his companies, and that dedication would be an admirable quality in a commander-in-chief.