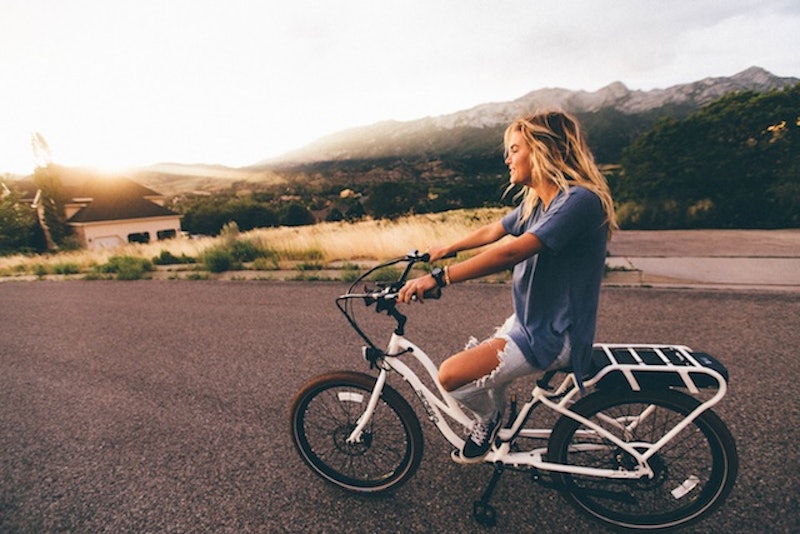 Global warming is an incontrovertible truth, even if climate change deniers persist. One of the most high-profile presidential candidates is actually repeatedly denying global warming (despite the sheer amount of emissions he must burn keeping his hair in check). And it's taken not one, but four studies to finally refute the myth that global warming had somehow "stopped" in the last decade. We're just not particularly willing to accept that the climate is changing — or that it may have something to do with human actions.

The science behind global warming — that gas emissions on Earth cause a "blanket" in the atmosphere, enclosing the planet, raising its temperature and altering its climate patterns — is well known. But in the face of overwhelming images and statistics — like the emaciated polar bear that went viral this week, seemingly starved by the breakup of ice in its native Arctic by, you guessed it, warming temperatures — it can seem a bit hopeless.

While on a personal level your contribution to lowering global warming is likely to be negligible (unless you happen to be Bill Gates or to own an enormous shipping fleet), there are still small changes to be made that aren't inconvenient and will ensure you're reducing your contribution as much as possible.

The differences may be small, but they're worth making — and adding your voice to political causes to make our lives low-emission may have further impacts than you think. (Also, you'll get to feel really smug.)

Greenpeace has a host of global warming initiatives that you can do at home — and there's quite a lot you can try to reduce your household's energy consumption. Turning off appliances you're not using; getting energy efficient new appliances; making sure you're not lavishly heating or cooling a house unnecessarily; and insulating your house to eliminate the need for extra heating are all good steps to keep your footprint small.

2. Get A Home Energy Audit

Even if you just rent your house/apartment/share it with five roommates and somebody's kitten, it can be a good idea to ask your utility company for an energy audit. They're basically designed to show you how much energy all your stuff uses, which ones suck up the most, and how you could make things run more efficiently. You'll feel incredibly grown-up — and probably also a bit horrified when you figure out just how much energy your ancient refrigerator is chewing up per month. (Ask your utility if they have options for green energy in your area, too.)

Next time a light blows — or when you next have the money to go on a blow-out shop (sorry for the pun) in the light bulb aisle — replace all the lights in your home with more energy efficient alternatives. They're called compact fluorescent bulbs, and while they'll cost more to purchase than ordinary light bulbs, they'll be far more energy efficient and can last up to 10 times longer. Plus, they'll lower your electricity bills while still producing your required amount of light.

One of the interesting things about food emissions is that "eating locally" may not actually be the greenest way to be. Some small farms may actually be less energy efficient than big ones further away, and the road or air miles may not cancel out the difference.

One element climate scientists do agree on, however, is that the beef industry in particular causes huge amounts of one particular greenhouse gas: methane. Even if you're a committed carnivore, it's good for your health not to overly rely on red meat and dairy in your diet — and good for the planet, too.

If you're going to go around the world, chances are you're going to be reliant on planes — but, unfortunately, they don't have the best reputation as a green mode of transport. The emissions created by air travel will probably be your most significant contribution to greenhouse gases in your lifetime (though, notably, The New York Times calculated that they total only five percent of all warming — another indicator that the individual is only a small part of this problem).

If you can limit your air travel, do it — and don't just replace it with a car. Travel via public transport and over short distances wherever possible. If you have to fly, try to go during the daytime; night flights have a higher emission footprint.

6. Wash Your Clothes In Cold Water

If you get the right detergent, washes don't need to be hot — or even close to it. Hot water washes aren't technically required (and can ruin your clothes anyway), and the estimates on the emission benefits of switching to cold are pretty insane. The National Park Service has the statistics: switching to cold water for two loads a week cuts down your emissions by 550 pounds a year. (Obviously, it's also better to line-dry your clothes, rather than using all the energy up again on a dry cycle.)

7. Pick Cars Based On Fuel Economy

Owning a car is, pretty obviously, one of the biggest emission-boosters in a person's life. But if you sincerely can't do what you need to do via public transport or bike, the Union Of Concerned Scientists, a nonprofit lobbying group concerned with global warming, recommends that you do some basic research under the hood of your next car. Fuel efficiency — the rate at which your car's engine consumes fuel — is not only a key component of its running cost, it's also a big indicator of its environmental footprint. The more efficient it is, the cheaper, and the greener.

Not all "green" ideology is the same. Environmentalists disagree, for instance, on whether nuclear power is the future of clean energy, or whether geoengineering (deliberate fiddling with atmosphere chemical levels to lower global temperature) is a good idea.

So before you start signing petitions, don't just seek out anything that says "lowering emissions" willy-nilly; do your research, look at the most recent science, assess the arguments for and against, and put your voice in the place where you really believe it can help. Change.org and your local government website will have lists of the petitions currently going.