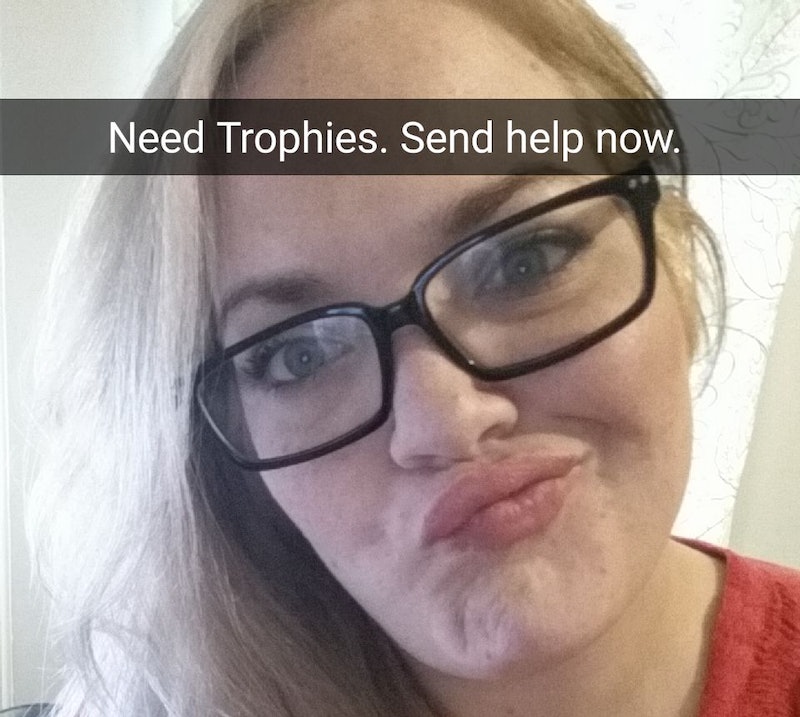 It's been mere days since Snapchat unveiled its latest update and, thanks to some colorful new lenses (see what I did there?), we've seen enough people puking rainbows to half-believe the entire world is stuck in a Skittles commercial gone awry. But, dear friends, there is more to the Snapchat update than upchucking sparkles or turning yourself into the terminator — both of which, admittedly, are super fun and respectable ways to pass the time. As are memorizing the already emerging Snapchat hacks that allow you do to things like create twinkly GIFs of vintage Oprah and turn Donald Trump into the cyborg we all know him to be beneath that hairpiece. In all seriousness, though, there were a few other perks to this tweak that we all missed whilst Snapchatting everyone and their sisters pics of what we look like as denizens of the undead and rainbow spewing anime creatures. Again, no judgment.

So, if you use Snapchat with any regularity, there are two things you should do: Number one, own it, my friend. Snapchatting is a social media art form, and you are the Picasso of rainbow puking. Number two, check out some of the other features the highly addictive app rolled out with the new update which were subsequently overshadowed by the killer new Lenses feature.

We're all familiar with Replay, right? Because we're all good little boys and girls, Snapchat has let us have one Replay a day for the last few years. Naturally, we rely on it to relive amazing moments before they disappear into oblivion. Or, you know, if you're anything like me, actually catch Snaps you missed the first go-round because something shiny distracted you in that 10-second time span. But now, courtesy of the new update, Snapchatters can purchase extra Replays starting at 3 for $0.99. "You can use a Replay on any Snap you receive, but you can only Replay any Snap once. They're a little pricey — but time is money ;)," Snapchat explained in a blog post.

In summation, no, you may not hit repeat on that shirtless Snap from your latest Tindr right-swipe. (You'll need to do a screen grab for that.) Anyway, this is pretty straightforward. Much like the past, you'll get prompted after viewing a Snap to replay it. Once you've used your replay of the day, you'll be prompted to shill out some change for more.

I've had more than a few people in my life tell me I'm the most competitive person they know, which suits me just fine... because it means I'm winning. Accordingly, I was pretty pumped to discover that Snapchat now offers virtual trophies — part of the update the app refers to as one of its "fun surprises." You may or may not have noticed the trophy icon chillin' above your Snapcode on the home screen. Clicking on that shiny little sucker will take you to your collection of Snapchat accolades (Snapchaccolades?).

As you can see, I currently have none, 'cause I'm the worst. You're apparently rewarded these guys for completing milestones, such as taking a Snap using the front-facing flash, but no dice for me so far. Heretofore, if you know how to earn cutesy little trophies for your Snapchat case, Snap me the secret to life @JulieUhGulieUh. See also: Perhaps if I charged my phone, that would earn me some trophies.

Remember yesteryear when you could see precisely how long a Snapchat Story was going to last? Well, in the immortal words of the Steve Miller Band, time keeps on slipping, my friends. And in this case, it has slipped right off the screen — the countdown clock we've become accustomed to seeing in the upper-right corner of "Live Stories" is no more. In its place is simply a circle that disappears segment by segment until the Story is over, meaning you could be spending 10 seconds of your life watching a menagerie of your best friend's selfies and #subsnaps, or you could be spending three and a half minutes or more. Also, yes, I do watch Jared Leto's Story every day. Because, obviously.

Fall has finally arrived, heralding the return of all those autumnal things we hold sacred: crimson-colored leaves, cute scarves, the Pumpkin Spice Latte and, yes, football. This season just wouldn't be the same without those Friday (or Monday, or Thursday...) Night Lights. So, here's the good news for super fans — as part of the latest update, Snapchat partnered with the NFL to bring Snapchatters weekly videos. A compilation of fan-generated content and exclusive footage shot by the NFL exclusively for Snapchat, these Live Stories brings the action to you. And, here's even better news — these Stories make watching football fun even for those of us who choose teams solely based on how pretty their uniforms are. Now, if that doesn't make you want to Snap yourself puking rainbows, I just don't know what will.