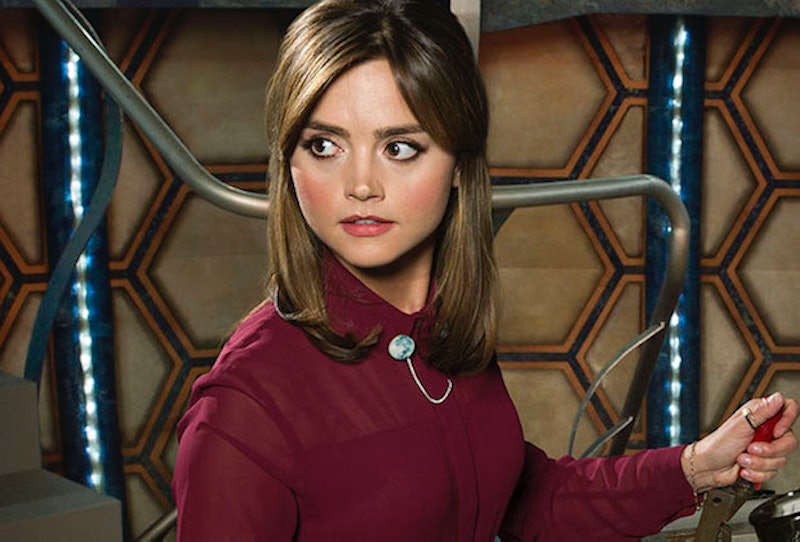 The latest round of rumors that Jenna Coleman is leaving Doctor Who certainly isn't the first, but it has been the most realistic. Given that Coleman, who plays Clara Oswald, has been on the show since 2012, she's almost maxing out on the time a typical companion gets to spend with the Doctor, making it more likely that the gossip was true. And now we know for sure that it really is happening, as Coleman confirmed that she's leaving Doctor Who and in fact has already filmed her final scenes for the sci-fi series. This is basically the worst news I've heard all week, but let's try to hold it together and proceed, shall we?

Coleman announced her exit during an interview on BBC Radio 1 on Friday morning, saying, “I have left the TARDIS… I’ve filmed my last scenes.” She admitted that leaving is an "emotional" experience, but wouldn't give any real info on how it's all going to go down. "We’re not going to give any details but it will happen at some point this season,” she teased. "[We've] worked out a really good story arc, so hopefully people will love it." I'm sure we will, but that doesn't make this any easier.

It's been suggested that she'll be gone before the Christmas special, but that remains to be seen. Either way, this is so sad, right? However, just because she's leaving the series doesn't mean she's going to stop working. In fact, if you can bear to watch her in another non-Who role, she'll be appearing in a TV miniseries about Queen Victoria next, which will give her a chance to flex her acting muscles and will give us a chance to see her as someone completely different.

Of course, we don't need to say goodbye just yet — we should enjoy the time we have left. How Doctor Who will resolve Clara's storyline will be interesting, but even more interesting is the thought of who might take on the role of the next companion. We know River Song will be returning for the Christmas special, but it's unlikely she'll stay long term again, unless Alex Kingston knows something we don't. That role will have to be filled, and I'm sure we'll love her just the same.