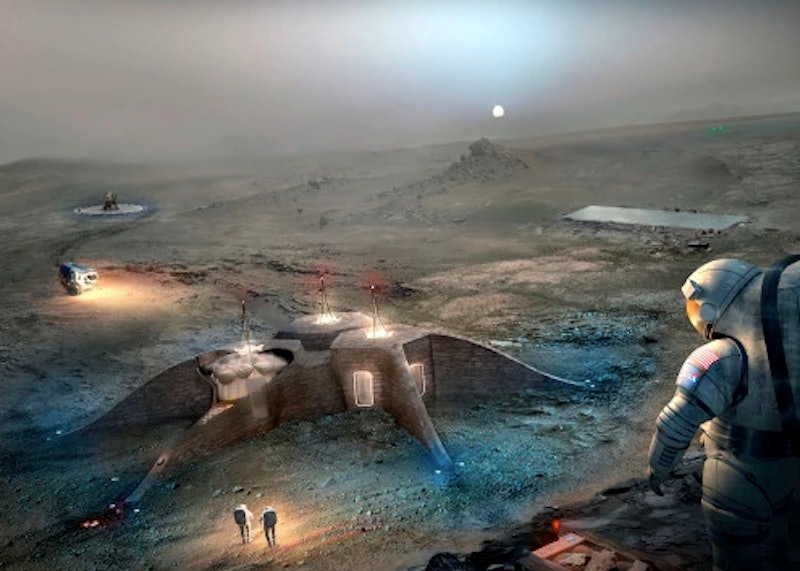 3D printing has the power to change the world — and not just this world, as it happens. A few months ago, NASA launched a contest to design 3D-printable Mars habitats that could support humans for an extended period of time on the red planet, and now the finalists have been announced. And the designs look incredible.

Space travel has a long, long list of logistical difficulties, and one of them is the fact that the more you try to send into space on a mission the more fuel you'll need — and the more it will cost. Which is probably why NASA is so keen to figure out a way to manufacture habitats using materials that already on Mars. Instead of having all the of heavy parts of your shelter taking up space in the shuttle and weighing it down, instead astronauts would just need an instruction manual and a 3D printer in order to build themselves a shelter.

After NASA announced their contest in May, they got plenty of entries, and now they've decided to let the rest of us see what life on Mars in the future by posting the finalists on Tumblr. Mars might be a planet populated entirely by robots today, but in future decades, it looks like it might be home to some pretty snazzy living quarters.

Whether they burrow into the ground like a cork screw or look like your traditional geodesic dome, here are a few of the most eye catching designs.

This design incorporates the otherwise discarded shell from the Entry, Descent, and Landing system of the original shuttle to make a hard roof, as well as a "lava casting" building technique, to help the structure weather the harsh conditions on Mars.

With this design, astronauts would print a hard shell to surround the other buildings and protect them, which makes it possible to build a settlement on a variety of geographic conditions, which is useful since you never know exactly what the landscape will look like when you touch down.

This habitat is designed to burrow into Mars's Equatorial Frozen Sea, providing not only protection from solar radiation and better temperature regulation, but also giving the settlement access to water.

This design accounts for the potentially varied terrain by using modules that can be arranged in different configurations.

The approach creates steel and silica bunkers to protect the inhabitants.

This cute design uses basalt fiber found on Mars to create a reinforced clay exterior that's "impervious to fire, chemical degradation, and radiation," which sounds like a pretty good deal.

This design uses solar crafting to create a dome and a two-story habitat.

This design uses a hard Exo-layer to protect the settlement and an inner Meso-layer to create a stable atmosphere suitable for humans.

And this is just the beginning. So who will win the contest? It's hard to say, but the teams with the best design will each receive $50,000 — and even more important, the two teams with the best technique for manufacturing materials will get an impressive $1.1 million apiece. But whoever wins, it certainly looks like future Mars residents will have some snazzy housing.

You can find out more about these designs, as well as the many other cool finalists, here.