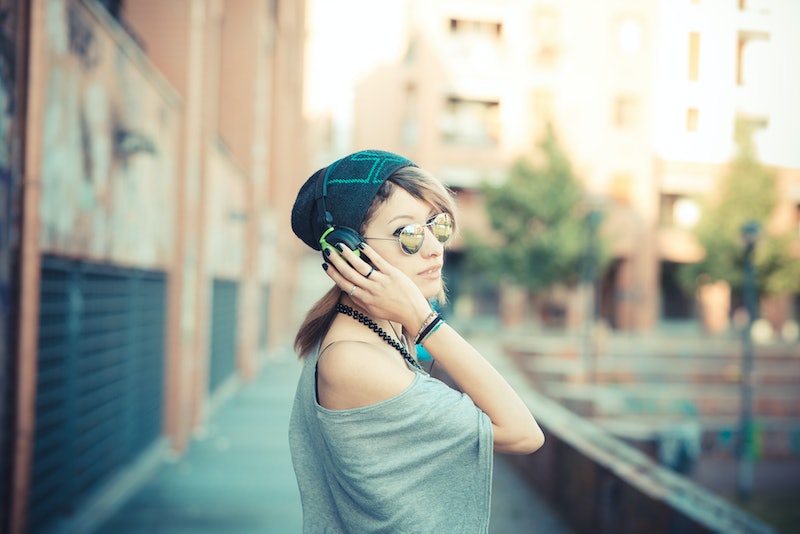 These days, it can feel like every song you hear is sprinkled with a healthy dose of misogyny. But if "feminist music" sounds almost like an oxymoron to you, you may just be looking in all the wrong places. Like any art form, music has been used as a means to explore what feminism and other social movements mean and how they're evolving.

Don't get me wrong — the struggle is real. "Female vocalists" is an entire radio station on Last.fm, making it obvious that not all demographics are equally represented in the music industry. The songs we sing along to at house parties and the videos we watch often contain disturbing traces of rape culture, purity culture (which is also part of rape culture), racism, and homophobia.

Here are a few songs that, to the contrary, promote feminist ideals (though they're not all completely free of problematic tropes either). There are so many I had to leave out (like all these feminist songs), but this should at least provide a jumping-off point if you're looking to listen to more feminist music. You've probably already heard the first few, but I threw in some lesser-known songs later on in the list.

Obviously. This is the go-to song to cite whenever someone accuses feminism of being militant, man-hating, or whatever the latest label is. Beyonce is a feminist, and she put her definition of feminism right in "Flawless": "a person who believes in the social, economic, and political equality of the sexes." By the way, we have author Chimamanda Ngozi Adichie to thank for that quote.

2. "Get On Your Knees" — Nicki Minaj Feat. Ariana Grande

With lyrics like "I'm a need you to beg for it" and "if you wanna get the job, you better know who's the boss," this song shows that women can be the boss at work and in the bedroom.

I can't tell you exactly what Monae is singing about, but it's definitely feminist (also, there's a subplot about rebels who are frozen in time, so yay for that):

They call us dirty cause we break all your rules downAnd we just came to act a fool, is that all right? (Girl, that's alright)They be like, "Ooh, let them eat cake."But we eat wings and throw them bones on the ground.

As '90s children, many of us could relate to the lyric "they won't let me drive late at night" regardless of gender, but girls in particular shared Gwen Stefani's indignation about the pressure to be "all pretty and petite."

5. "Underneath Your Clothes" — Shakira

Though not explicitly so, I've always found this song feminist. It's the first time I remember hearing a woman sing sexual lyrics that made her seem more like someone who possessed her own desires than an object of someone else's.

Little-known fact about Nirvana's lead singer, you guys: Kurt Cobain was a feminist — which is clear in this powerful song exposing the sad truth that, despite all the advice women are given to stay out of trouble, the only way to truly protect our daughters would be having sons instead.

At first, the lyrics to this song sound staunchly anti-feminist (exhibit A: "everything is cool as long as I'm getting thinner"). But it becomes obvious by time you get to the chorus that Allen is, as usual, being bitingly sarcastic. She really doesn't "know what's right and what's real anymore," and the song's actually about "the fear" of failing to embody the superficial standards of perfection women are held up to.

Given the title and the artists' lesbian identities, this song was probably written with LGBT pride in mind. But that is a feminist issue, and the lyrics of hope, self-acceptance, and changing times could be about any social movement.

This song is a pretty interesting break from Lewis' Rilo Kiley days, when depressing songs like "Glendora" and "Does He Love You" spoke to every woman who has been treated as disposable by a man. In a more subdued tempo, "Just One of the Guys" addresses the difficulty of fitting in with the old boys' club of music, with a video featuring Anne Hathaway and Kristen Stewart in drag.

This Canadian rock band plays around with gender in some pretty fun ways, including in the "Gimme Sympathy" video, with male band members lip-synching to the female lead singer's voice. Though the meaning of "Glass Ceiling" is a bit cryptic, lyrics like "there's no knight in silver armor shining" corroborate the feminist theme that the title suggests, and the chorus is just incredibly catchy.

The former Moldy Peaches lead singer sings, "I like giants, especially girl giants, because all girls feel too big sometimes, regardless of their size." Don't we, Kimya. Don't we all.

This song is heartbreaking. I first heard it in a social psychology class, when the professor played it during a lesson on gender stereotypes. We all know stereotypes are constricting, but "When I Was a Boy" gets to the heart of why gender roles are also really... sad.

13. "Tears For Animals" And Also Literally Anything By CocoRosie

This song is heavier than the rest on this list, with traces of the duo's ecofeminist themes in lyrics like "stop the slaughter of our daughters poisoning the water." But seriously, go listen to their entire Tales of a GrassWidow album. And Grey Oceans. And, in addition, everything. Just do it.

More like this
Everything To Know About The 2023 Grammy Awards
By Jake Viswanath
Beyoncé & Blue Ivy Performed A "Brown Skin Girl" Duet At Her Private Dubai Concert
By Brad Witter
25 Inspiring Quotes From Black Women To Celebrate Black History Month
By Kyli Rodriguez-Cayro and JR Thorpe
24 History-Making Black Women You Probably Didn't Learn About In School
By Ayana Lage and JR Thorpe
Get Even More From Bustle — Sign Up For The Newsletter
From hair trends to relationship advice, our daily newsletter has everything you need to sound like a person who’s on TikTok, even if you aren’t.