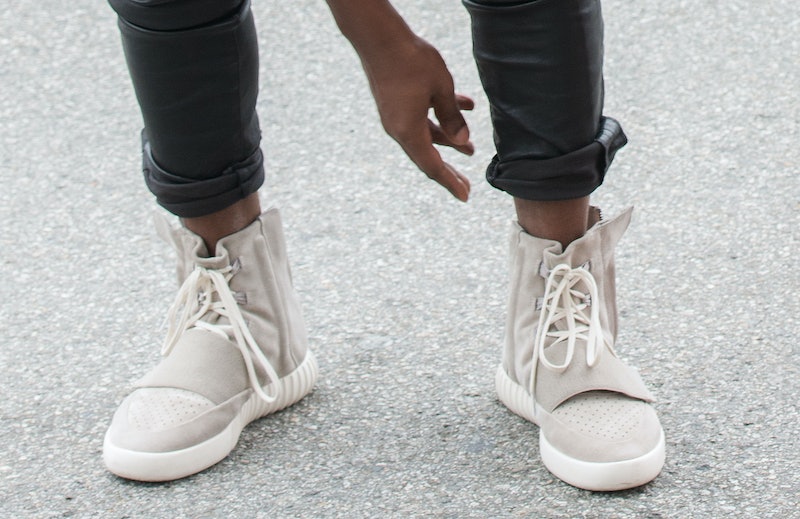 Say what you will about Kanye West, but he is the man behind the most coveted shoe on the planet right now. Unless you know where to buy Yeezy Boost sneakers, it's almost impossible to find a pair of the sold out kicks. Even Emmy-nominated actor Jesse Tyler Ferguson had a hard time finding Yeezys for his husband's 30th birthday, but at least he went straight to the source (or as close as possible) in order to get a pair.

“I happen to know one of the girls who’s on the Kardashian glam squad, Jen Atkin," Ferguson told Ellen DeGeneres. "My friend Jen was literally on the phone with Kim Kardashian, saying 'I need a size 11 of the snow-white gray sneaker,' then she’s like 'Okay, Kim’s going in the back room to see if she can find that.'" According to Ferguson, even the reality star and fashion icon couldn't find the right color and size Yeezys that he needed even though she apparently looked all over her house for them.

“I just picture Kim in a Foot Locker outfit going in the back room to find a size," Ferguson said. After several attempts that included other members of the Kardashian family attempting to locate the sneakers, Ferguson ended up purchasing the elusive pair on eBay for his hubby Justin Mikita.

Unlike Ferguson, the rest of us aren't one phone call away from Kim Kardashian nor are we lucky enough to be one of these celebrities wearing Yeezy Boost 350, but there are still ways to get the Holy Grail of shoes. You can find plenty of Yeezys currently being sold on eBay, but be prepared to drop serious cash and also know how to spot fake Yeezy Boost 350s from a mile away. Most brick-and-mortar stores are sold out of these sneakers, so shopping for them online through TopSupplied and other trusted sellers is always a good option. Last but not least, if trying to buy the 350 version is getting you nowhere, then it might be best to wait for the upcoming release of the Yeezy Boost 750 and trying your luck then.