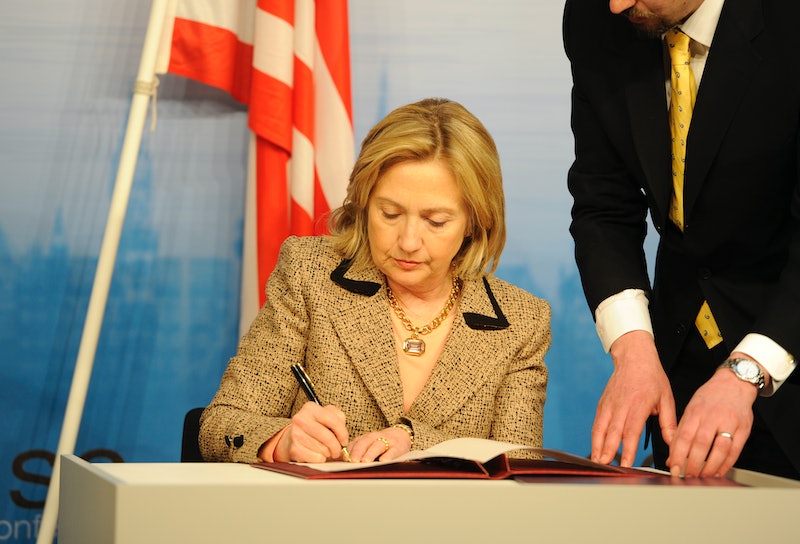 Signatures are interesting things. After years of scribbling the same name over and over, you'd think there'd be nothing more to it than a mish-mash of messy letters and illegible loops, but according to many handwriting analysts, a signature is worth about a million words — if you can read it correctly. That sort of sneaky skill can come in pretty handy when trying to suss out the current GOP and Democratic field of presidential candidates, most of whom have spent the majority of their adult lives trying to hide the real person behind that shiny partisan veneer (you know, the one that likes Flamin' Hot Cheetos and spending the night binge-watching House of Cards). Now, thanks to Politico Magazine and United States Secret Service's Advanced Document Examination grad Michelle Dresbold, who analyzed the handwriting of each 2016 candidates this week, the job has already been completed for us.

So how does all of this work, exactly? Handwriting analysts have attributed certain styles of swoops, loops, and crossed out letters to certain corresponding personality attributes and tendencies. A steep forward slant, for example, can indicate an aggressively future-directed nature (or a desperate need to hurry up and run to the bathroom maybe), according to Certified Master Graphologist Paula Sassi, who spoke to Business Insider in 2011.

Likewise, high loops can indicate an imaginative personality, willing to think big to accomplish ideas, Sassi explained — or maybe it just means that person got tired of writing his or her signature and decided to start doodling pictures instead. Look, it's a dove!

Still, for all of that expertise, there are likely two reasonable explanations behind every signature, especially in the case of characters like this election season's biggest names. Here, Dresbold's professional opinion, as well as a more practicable explanation for your consideration:

What The Pro Says: "Jeb Bush makes the upper loop of the “J” in “Jeb” big and full," said Dresbold. "This shows that he is willing to take on a lot of responsibility."

More Likely Explanation: The "J" in Bush's first name is actually a drawing of his brother, President George W. Bush, as the Titanic — because Jeb will go down with that ship if he has to defend his brother's legacy a million times, damn it.

What The Pro Says: "The 'Ben' and 'Carson' are so close together that they touch, which shows that growing up, Ben feared abandonment," explained Dresbold, whose book

Sex, Lies, and Handwriting: A Top Expert Reveals the Secrets Hidden in Your Handwriting debuted in 2008. "Carson [also] loops down and forms a line underneath his signature, which shows that he has confidence in himself," she added.

What The Pro Says: Dresbold explained that the upward slant of Christie's large signature probably indicates an "upbeat", "success-driven" personality. "The 't' crossing in his last name ends with a dot, presumably the dot of the 'i', [and] resembles a bat and ball, which means Christie could have a deep interest in baseball," she said.

More Likely Explanation: The dots in Christie's signature are actually smiley faces to remind him of that time Obama gave him a hug. That was sooo cool, guys.

What The Pro Says: "A vertical slant takes a lot of control," said Dresbold, calling Clinton's print-signature indicative of a creative personality. "Hillary [also] clearly writes 'Rodham' — clearly she doesn’t want people to forget that she is, first and foremost, her own person."

What The Pro Says: "Ted Cruz’s signature is written in heavy and thick tones — this demonstrates that he is determined and dogmatic," said Dresbold. "His 'z' ends sharply and abruptly, indicating that when he says something, he means it [and] will cut off anyone who thinks or sees things differently."

What The Pro Says: Fiorina's signature "shows a person determined to make it in life," explained Dresbold on Saturday, adding that the former HP CEO's letter 'F' was "formal and a bit pretentious."

More Likely Explanation: The letter "F" is actually a sneaky looking lowercase "h" meshed with an uppercase "P," because Fiorina's Hewlett-Packard years were an amazing success!

What The Pro Says: "Bobby Jindal’s signature is impossible to read," said Dresbold. "He doesn’t let others read him — at all."

More Likely Explanation: This is not a signature, it's a drawing of two angry swans about to duke it out in the bayou.

What The Pro Says: "George Pataki makes his capital letters small, simple, and unpretentious, meaning he most likely comes from a simple, homey background," said Dresbold this week.

More Likely Explanation: Halfway through his first name, Pataki got bored and decided to start a group dedicated to repealing Obamacare instead.

What The Pro Says: "Signatures that are unreadable show a writer who doesn’t want others to read him," said Dresbold, calling Rubio's scribbled autograph "difficult to decipher."

More Likely Explanation: Rubio's signature was in a fight with Rand Paul's signature and totally got messed up.

What The Pro Says: "Sanders' is easy to read, meaning that he states his views clearly and hopes for the best," said Dresbold, "[but] 'Bernie' looks like a 'B' and an 'X', which could be a sign that he has a fear of destruction and always has his eye out for the worst."

What The Pro Says: "Donald Trump’s signature has absolutely no curves, only angles. Curves in handwriting show softness, nurturing and a maternal nature," explained Dresbold. "... [The] large phallic ['P'] symbol shouts, 'Me … big hunk of man.'"

More Likely Explanation: Trump's signature is an accurate depiction of the many websites that he has "all over the place." They cost him $3.

What The Pro Says: "Scott Walker’s signature appears to be a strange version of 'Joe,'" said Dresbold.