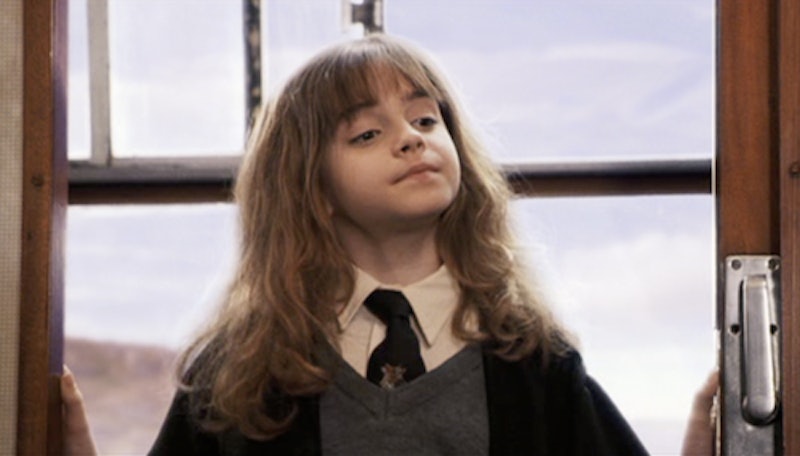 There are obvious reasons to admire a character like Hermione Granger (read: ability to cast spells, ability to pull off bangs, etc.), but her unabashed, fully rounded portrayal of female empowerment is what really solidified her spot as one of the best things to come from the Harry Potter franchise, and frankly, my childhood. For years, feminists have speculated whether or not Harry Potter as a series was feminist, and whether or not any of its character's were — but, to me, the evidence that both things are true is even clearer than the Cloak of Invisibility, and it's all because of Hermione.

(Side bar: super proud of that analogy.)

Hermione Granger was pretty much the epitome of everything I, as a muggle, wanted to be, and the fact that she's remained relevant for all these years just speaks to the power of her character. If thinking about Hermione Granger (who would now be 36) married to Ron and with super smart children that stand up for elves, and muggles, and woman of the world doesn't make you feel some sort of secondhand pride, I'm sorry to inform you that you might not have a soul. (Kidding, but not really.)

So, in honor of my favorite student at Hogwarts, and really, truly, the first witch I ever looked up to, let's recount the ways, 36 of them specifically, that Hermione Granger was a feminist.

1. When She Always Knew The Correct Answer

2. But Wasn’t Embarrassed To Be Smart

3. When She Proved Knowledge Was Power

Seriously though, how many times did Hermione save the day by doing her research? She valued her own education and saw nothing wrong with being a "know it all."

4. When She Was Clever

5. When She Was Talented

The best part about Hermione being exceptionally good at magic was that she never questioned herself and assumed because of gender prejudice that she was less talented than her male counterparts — even though others around her might have.

6. When She Had Positive Male Friendships...

SQUAD GOALS all day. These three were there for each other in the hardest of times (see: multiple near death experiences). Hermione showed that male and females can not only be friends, but best friends.

Yet, at the same time, Hermione was perfectly comfortable being alone.

8. Because She Was Often The One Doing The Saving

When times got tough, Hermione wasn't afraid to step in and sort things out. How many hairy situations did she get Harry and Ron out of, again? Oh yeah, too many to even count.

9. But Wasn't Ashamed To Be Saved

What are friends for if not to save you from monster trolls, you know?

Often times, the word "bossy" will bring up negative associations for a female — but Hermione wore the label proudly and made bossy girls everywhere proud.

Hermione's candor was an important facet of her personality. It proved that she wasn't afraid to tell anyone the truth, even if it was difficult.

Hermione regarded her friendship with Harry and Ron over everything. She was ride or die.

Not even he-who-must-not-be-named! What I'm really trying to say is, homegirl was a badass.

And yet, she was in touch with all the things that make her character so real. Hermione was down to shed a tear or two, and she never apologized for that or saw it as a weakness.

Even in the magical wizarding world of Harry Potter, you've got to know how to defend yourself.

Being a "mudblood" herself, Hermione took a stand against the discrimination of muggle born witches and wizards. And also, elves. (Obviously.)

17. When She Was Physically Strong

She always kept up with Ron and Harry, even when it was physically demanding.

18. When She Was Morally Strong

Hermione never let anybody compromise her morals, and didn't do anything unless she felt it was right.

19. When She Was Tough, But Caring

Hermione was the queen of tough love.

20. When Her Worth Was Not Realized Through The Eyes Of A Male

It didn't need to be because she always had her own thing going.

21. When She Was Flawed, But Unapologetic

She wasn't perfect, and she knew it, but she never made excuses.

22. When She Wasn't Afraid To Be Feminine

23. But Wasn't Limited By Her Beauty Either

Never, not once, did she let it define her.

24. When She Was An Active Participant In Her Own Story

Out of all the other strong female characters in Harry Potter, Hermione’s story followed the clearest narrative, and almost never included passivity.

25. When She Was Open To Falling In Love

Let's all take a second to remember who pulled the first move, though. Hint: it was Hermione.

26. When She Had Opinions

28. When She Was Independent

29. When She Believed In Justice

Hermione always knew that people (and by people I mean Draco Malfoy) would get what was coming to them.

30. When She Was Not Afraid To Question Authority

Just because Professor Umbridge was a teacher didn't mean that she wasn't actually the devil reincarnate.

When Hermione realized that the Ministry of Magic was corrupt, she did what she had to do.

32. But Still Had Ethics

Although Hermione had her own set of morals, she followed the correct code of conduct at Hogwarts (within reason). Often times, she kept Harry and Ron in line and made sure no one was killed — or worse, expelled.

33. And Was Always The Voice Of Reason

Hermione had a good head on her shoulders, which meant that she could be objective and see things for what they really were.

34. When She Had Many Layers

Hermione has a multitude of differing attributes, but was able to be all those things at once.

35. And Was Always Evolving

She was a fully formed character, and that meant that from year to year, she went through changes.

36. But She Was Never Afraid To Be Herself

Best of all, Hermione never apologized for staying true to who she was. Always.

I for one, feel thankful to have grown up with an inspiring, feminist role model like Hermione. So, Hermione, thanks for being so unapologetically yourself, and showing us all what female representation in both literature and film should look like.