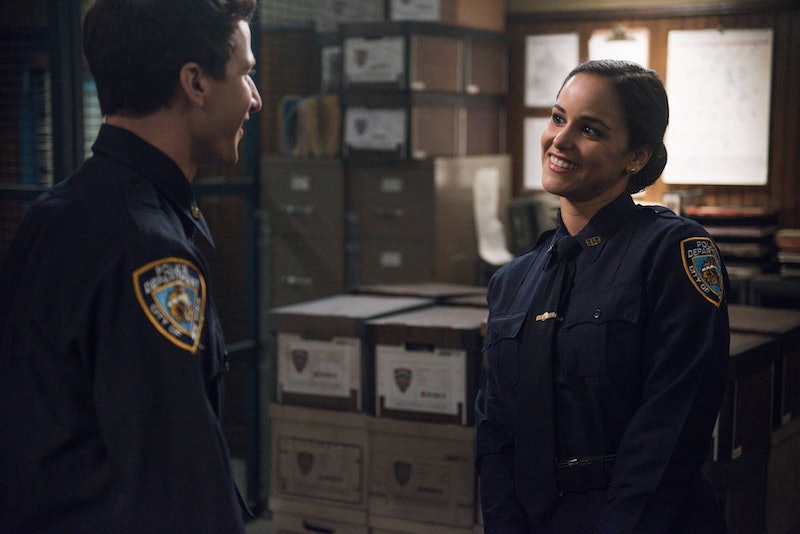 It's been a long summer filled with anticipation of seeing Bill Hader step in to play the new captain on Brooklyn Nine-Nine , but with Sunday night's Season 3 premiere, the wait was finally over. And thankfully, his turn as Captain Seth Dozerman, Captain Raymond Holt's replacement after Chief Madeleine Wuntch sent him to public relations hell at the end of Season 2, did not disappoint. That's mostly because he helped bring our favorite will-they-or-won't-they couple of Jake and Amy closer together, maybe even close enough to create a relationship that lasts.

However, Captain Dozerman's arrival at the 99th precinct was hardly welcome. Upon meeting the crew, he got right down to business with his "efficiency, efficiency, efficiency" motto and put them all to work. Well, after passing out for a moment from what he thought was a heart attack but actually ended up being a complication from an unknown heart condition of his. Once Captain Dozerman returned from the hospital, he instituted "Dozerpad" tablets with a built-in GPS and a countdown clock set to blare an alarm if the holder of said tablet didn't complete a task within the allotted 55 minutes.

Needless to say, no one in the Brooklyn Nine-Nine crew was a fan of Captain Dozerman's crackdown on the precinct. Seriously. He made Captain Holt look like a big teddy bear, which we know he kind of is anyway. (This would be a good time to mention how much I miss Captain Holt leading the precinct, and it's only the first episode with him being gone to head the NYPD public relations department. I don't know if I can make it until his — hopefully — eventual return.)

Thankfully, all of the craziness with the captain switcheroo in the precinct didn't derail Jake and Amy's relationship. As we saw in the Season 2 finale, they kissed as part of a case and then kissed some more after that for real. They both liked the thing they had going, as do I, so they decided to pursue the relationship but in a "light and breezy" way. Since Amy is involved, this of course included rules, such as not telling anyone about their relationship, not giving it any labels for that matter, and not having sex right away.

Of course, keeping things "light and breezy" proved to be a lot more difficult than they initially imagined. Charles kinda sorta figured out there was something going on between these two, even if Jake did save them with a cover-up that he was actually dating a woman from his gym. Jake and Amy also got completely hammered during their first date and ended up sleeping together.

Oh well. Now with all of the rules basically broken, they threw all caution to the wind and broke another no-no: making out at work. Captain Dozerman walked in on them because the GPS in their darn Dozerpads told him they were loitering in the evidence room for too long. Captain Dozerman felt so betrayed by Jake, who told him he didn't want anyone at work to talk about their personal lives, that he had a heart attack — for real this time — and died.

At first, with all of the drama that had come to the precinct, Amy thought it would be best for her and Jake to put their relationship on hold. I mean, they did kind of kill someone with their kissing. Jake agreed but then got a pep talk from Charles to go get Amy and tell her his true feelings. But Amy arrived at Jake's door first to tell him he was the only person she wanted to talk to about everything that had happened at work recently and that they should pursue a relationship. That was an especially cute moment in the series that went against typical rom-com conventions. I still expected Jake and Amy to end up together at the end of this episode, but the way it happened made me appreciate the moment more.

All right! It looks like after two seasons, Jake and Amy have finally made things official. Now the question is how long they'll be able to last and how long it will remain entertaining for viewers. As I've said in the past, the thrill of the chase is often the most interesting part of watching relationships on TV. I've waited a long time for Jake and Amy to get together, and now I just hope that I like them as a couple as much as I like them individually.